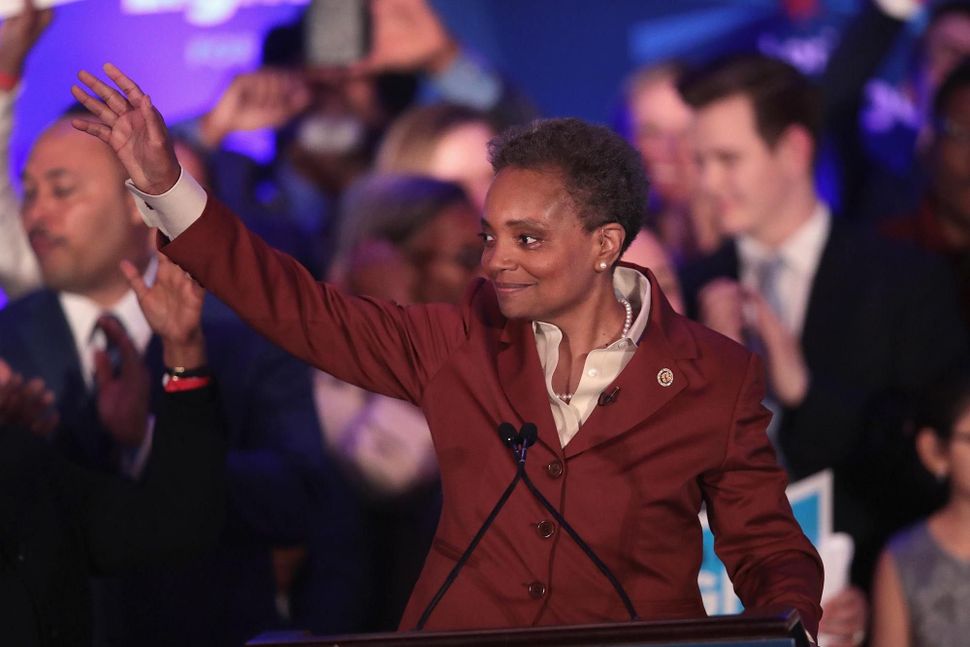 Lori Lightfoot delivers a victory speech after being elected the next mayor of Chicago on April 02, 2019. Image by Scott Olson/Getty Images

The Jewish community in Chicago is one of the biggest in the country, and until recently, the mayor was Jewish, but leaders in the city’s largest Orthodox neighborhood said that a mayor hadn’t come to meet them there for decades – until June 15, that is.

Lori Lightfoot, who took office last month, is the first black woman and first openly gay person to run the Windy City. Her top priority, she has said, is improving public safety. The top issue on that front is curbing gang violence in low-income neighborhoods, but the director of government affairs for the Orthodox advocacy group Agudath Israel of Illinois, Rabbi Shlomo Soroka, said the visit “demonstrated that the safety of every community is important to her.”

Soroka said that Lightfoot herself pitched the visit to West Rogers Park, the city’s biggest Orthodox enclave, after the Poway synagogue attack in April.

“It was her idea – ‘What do you think about me coming to visit on a Shabbos and seeing firsthand what you’re describing, and impart to the people a sense that the mayor cares,’” Soroka recounted.

The visit was especially striking since Lightfoot’s predecessor, Rahm Emanuel, is Jewish but, according to Soroka and others, never did such outreach to ordinary neighborhood residents. Lightfoot’s planned walk-and-talk listening session became more timely last month after the neighborhood saw a spate of vandalism incidents outside synagogues – not to mention an attempted firebomb of a synagogue near Wrigley Field.

“We know that ultimately it’s in God’s hands, but in terms of having a government and government agencies that take our concerns seriously, it’s done a lot to mitigate that feeling of insecurity,” Soroka said.

Lightfoot spent part of the Sabbath afternoon after synagogue services concluded walking the streets of neighborhood, meeting with leaders and talking with passers-by, learning about their security concerns and some of the particular needs of Orthodox communities, like eruv wires.

The visit was not publicly announced by City Hall; there are no pictures of the visit on the mayor’s social media pages, and the mayor’s press office did not respond to a request for comment.

But Soroka said the lack of a photographer on Shabbat showed Lightfoot’s sensitivity to community concerns, as well as proving that this was a genuine concern to her and not just for show.

“In advance of the visit, we requested that we shouldn’t have photographers on the Sabbath, to keep with the sanctity of the day – it may not violate the letter of the law, but the spirit of what it’s supposed to be,” Soroka said. “And that’s a tall order….Pictures are important and messaging is important. And the message I got back is, ‘She’s not coming for the photo op, and if this is something that’s a cultural sensitivity, she would like to respect that.’”

People who were there told the Forward that Lightfoot was a big hit with the crowd. A rabbi gave her a blessing that God should grant her wisdom; people on the street offered her water bottles; someone else gave her two challahs, a bottle of wine, and a saltshaker “because she’s going to shake things up,” Soroka said.

Political consultant Marilyn Katz said she was impressed by the visit after the Forward told her the details. “I think it’s fascinating,” she said.

Lightfoot, a former assistant district attorney and president of the Chicago Police Board, had never run for office before this year and thus had fewer connections to the Jewish community than her opponents, Katz explained. Unlike in New York City, Chicago’s Orthodox community isn’t big enough to serve as a powerful voting bloc. And since West Rogers Park and other neighborhoods on the North Side have below-average crime rates, they usually get less attention from leadership. All of these factors make Lightfoot’s visit all the more unexpected, Katz said.

Veteran community leaders said that part of the enthusiasm came from the fact that other than fundraisers in someone’s home, a sitting mayor hadn’t visited the neighborhood’s Jewish community in at least 20 years.

The last time this happened, said retired yeshiva principal Rabbi Charles Abramchik, was sometime in the mid-90s, when Mayor Richard M. Daley visited a girls’ seminary that had been renting a building from the public school system and had just won a court case over a disputed lease.

Abramchik is a Chicago native who moved to Miami 15 years ago but was in town last weekend for his grandson’s bris ceremony. He contrasted Daley’s appearance at the school with Lightfoot’s tour.

“[Daley’s visit] wasn’t a trip to the community, it was basically a trip to the school…. Lightfoot’s was a walk through the entire community to show support – a whole different ballgame,” he said.

The fact that Emanuel, the mayor who served between Daley and Lightfoot, is Jewish may have explained why he didn’t feel the need to visit, Katz hypothesized.

“When you’re a mayor, particularly a mayor of a certain background….you tend to go to the communities you don’t know,” she said.

“For Rahm, it was really critical to be in the black community,” she added. “I don’t think he felt any need to be in the Jewish community at all.”

Soroka said that Jewish groups like his had worked well with the Emanuel administration, and that the former mayor had attended fundraisers in local Jewish families’ homes, though not in public community events. Emanuel was criticized during his tenure for being insufficiently accountable and accessible to the public.

Days after Lightfoot’s visit, Soroka was still beaming about the visit. He said he and other Jewish leaders first met her the day before her victory.

“She promised to make herself accessible, and she has always been extremely responsive,” he said. “Taking the extraordinary move this past weekend is another example of how sincere she is.”