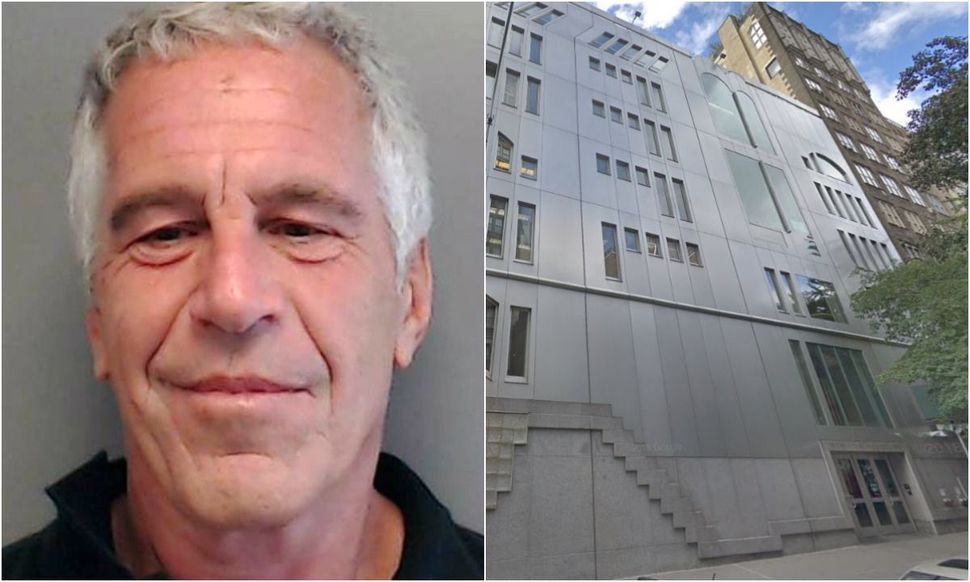 The elite Jewish school that received a $500,000 donation from Jeffrey Epstein had a unique connection to the mysterious financier charged for sex trafficking of minor girls. The lawyer responsible for getting Epstein his “deal of a lifetime” sent his children to that very school, and was a leader in that community.

In October 2007, the lawyer, Jay Lefkowitz, secured a plea deal for Epstein that effectively ended the first criminal investigation into allegations that Epstein was paying teenager girls to perform sex acts for him. The deal, later deemed illegal, was agreed to by Alexander Acosta, then the top federal prosecutor in south Florida and later Donald Trump’s Secretary of Labor.

Four months later, a foundation controlled by Epstein listed a major anonymous gift: $500,000 to The Ramaz School, the elite Jewish academy in Manhattan where Lefkowitz sent his three children.

In an email sent to the Ramaz community Wednesday evening and shared with the Forward, Ramaz said a “community member” brought the donation to the school, and that it didn’t know the original source of the gift. Yet two former Ramaz employees said they doubted that a donation of that size, brought by a community member, could have been made without the school’s long-time leader, Rabbi Haskel Lookstein, being made aware of the donor’s identity.

“There’s just no way that a donation of half a million dollars could have been solicited or received without the full knowledge of Rabbi Lookstein,” said a former senior Ramaz employee who worked at the school after the time of the donation, but while Lookstein was still its principal.

Ramaz did not respond to questions about the identity of the community member. In the email, Ramaz said that it was changing its policy to require greater transparency in major gifts to the school. The school said it would no longer accept major gifts without being aware of the benefactor’s identity, but did not clarify whether that meant the school would no longer list donations as anonymous.

It’s not clear whether Lefkowitz was aware of the foundations that Epstein used to donate money to various causes. Lefkowitz did not respond to an emailed list of questions about the donation.

While Ramaz said Epstein made the donation in 2007, it was listed in tax documents filed in February 2008 — four months before Epstein would enter his guilty plea for charges stemming from the investigation into his alleged sex acts with minors. Epstein was arrested earlier this month in New Jersey and charged with sex trafficking of minor girls.

The donation to Ramaz came from Epstein’s C.O.U.Q. Foundation, which has anonymously contributed to many organizations, including $2.5 million to The Ohio State University, listed in the same 2008 filings. The foundation was largely funded by $21 million in stock and cash funneled from two charities created by the clothing magnate and philanthropist Leslie Wexner, The New York Times reported. Epstein had assumed leadership roles at Wexner’s foundations, and held power of attorney over Wexner’s massive fortune for many years.

Wexner has been a major philanthropic force in the Jewish world for over two decades. The Wexner Foundation funds the Wexner Fellowship, a sought-after program for emerging Jewish leaders.

Lefkowitz, a former George W. Bush administration official, represented Epstein after he was indicted for paying minor girls for sexual favors. In a breakfast meeting at the West Palm Beach Marriott in Florida, Lefkowitz got Acosta — who resigned as Labor Secretary earlier this month — to agree to a plea deal that a judge has since decided violated federal law: Prosecutors allowed that, in exchange for a guilty plea from Epstein, all pending subpoenas in the investigation would be canceled, the deal would be kept under seal and none of Epstein’s victims would be notified.

Ramaz is considered one of the premier Jewish academies in the United States. Its students have traditionally come from Modern Orthodox homes that are strictly observant of Jewish law, strongly encourage interaction with the secular world and prize equal educational opportunities for men and women. Located on Manhattan’s wealthy Upper East Side, the school modeled itself as a top prepatory academy, and developed a reputation for sending graduates to Ivy League universities.

Rabbi Haskel Lookstein, the long-time leader of the Kehilath Jeshurun synagogue and an internationally known Orthodox rabbi, led the school for decades. Lookstein’s father founded the school, and Lookstein was part of its first class. He was Ramaz’s principal at the time of Epstein’s donation. (When contacted by the Forward, Lookstein declined to speak to a reporter.)

Lefkowitz is a prominent member of the twin KJ-Ramaz community, where many families are members of the synagogue and send their children to the school. Lookstein married Lefkowitz and his wife, and the Lefkowitz family has consistently donated to Ramaz’s annual campaigns in the $25,000 to $99,000 bracket, according to Ramaz publications available online. His page on his law firm’s website — accessed through the Internet Archive — lists him as a Ramaz board member from 2013 to the summer of 2018.

“He was and is a very prominent member of the Ramaz community, very close to Haskel Lookstein,” the former senior employee said.

“He was clearly one of the big influencers at that time [of the Epstein donation],” said Lee Levine, a college advisor at the school from 2005 to 2007. “His name would come up, I want to say, maybe once a month in some context or the other.”

“There were probably six or seven or eight families that you would hear about all the time, and it was a little unclear what their specific roles were,” Levine added. “But clearly they were able to influence decisions that were made institutionally. And I always assumed that [Lefkowitz] was one of those guys who could do that.”

Lookstein took emeritus roles at both Ramaz and KJ in 2015.

Ramaz did not answer emailed questions from the Forward about what the donation was used for or whether the school plans to return it.

In August and September 2018, the Forward reported that Lookstein had been made aware of accusations of child molestation and inappropriate sexual contact perpetrated by two Ramaz employees. One of the longtime teachers accused of sexual misconduct with students was a friend of Lookstein’s and one of his tennis partners.