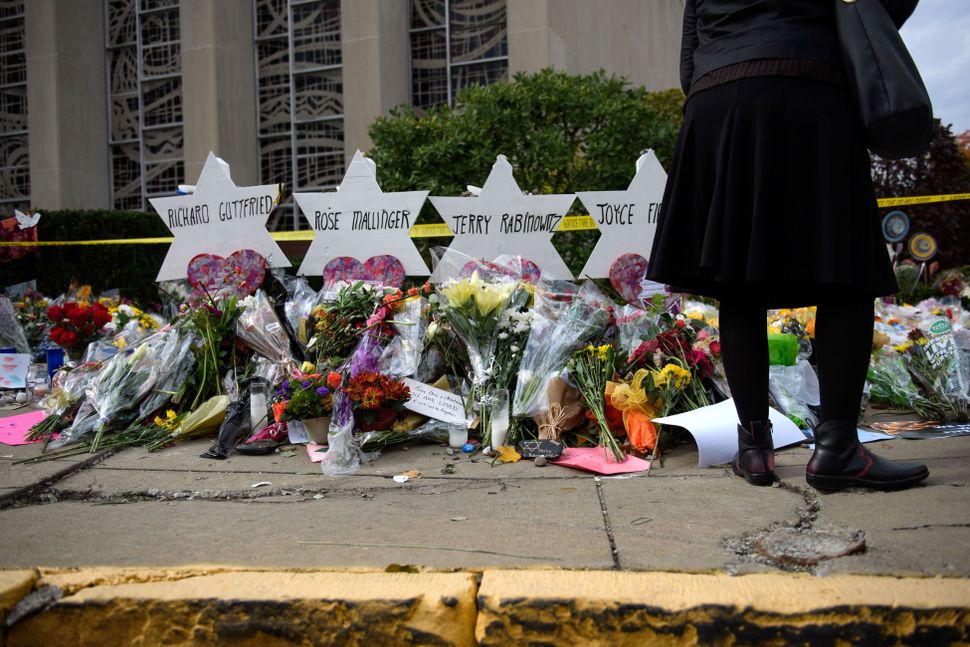 Mourners visit the memorial outside the Tree of Life Synagogue on October 31, 2018 in Pittsburgh, Pennsylvania. Image by Jeff Swensen/Getty Images

For Jews, the saddest day of the year is almost here.

It’s a holiday called Tisha B’Av; it happens this weekend, and it compresses every Jewish tragedy into one searing day of fasting and mourning. The First and Second Temples were both destroyed on “Tisha,” or the ninth, of the Hebrew month of Av, according to tradition. Expulsions of Jews from England and Spain are also said to have happened then, and on this day, we remember the massacres visited on medieval Jewry by Crusaders and the Holocaust. When World War I broke out on July 28, 1914, Jews noted the closeness in date to Tisha B’Av.

This year we’ll add the Pittsburgh synagogue shooting to our list of tragedies: A white supremacist gunman murdered 11 people attending Sabbath services at Tree of Life Synagogue in the city’s Squirrel Hill section this past fall.

“Arise, cry out in the night, at the beginning of the watches, pour out your heart like water in the presence of the Lord!” cries the Prophet Jeremiah in the Book of Lamentations, which is read on the holiday. “Alas, priest and prophet are slain in the Sanctuary of the Lord!”

For Jews of Squirrel Hill, mourning is not a matter of memory — not yet, and maybe not ever. Just days away from the holiday, they don’t know exactly what they will do, or how they will feel, but they are trying to prepare. Judaism will provide a foundation, and the the Jews of Pittsburgh intend to build on it.

As every year, men who are normally clean-shaven will attend services wearing the mourner’s beard. Nobody will wear leather shoes, a luxury rejected on such a tragic day; nobody will eat between sundown and sundown. They will chant the Book of Lamentations, which mourns the loss of Jerusalem and the First Temple. This year, however, therapy dogs will be on hand, and in some cases, special guests from across the city will share their own pain in a program called “Tales of Destruction and Rebuilding.”

Before the shooting, the custom in Squirrel Hill was to rotate the chanting of Lamentations between four congregations — Tree of Life, Dor Hadash, New Light and Beth Shalom. The first three used to share a building, and were attacked by the gunman; this year, Beth Shalom will host the service. It’s the first time the four congregations will be all together since the Shabbat following the shooting.

“Tisha B’Av is a container for tragic and traumatic events,” said Rabbi Jeremy Markiz of Beth Shalom. “It makes sense that we will sort of have to approach this holiday reflecting on our own tragedy.”

The holiday will surely trigger traumatic memories and difficult feelings, but it’s also an opportunity for healing, said Stefanie Small, the director of clinical services at Jewish Family and Community Services of Pittsburgh: “When you’re searching, you turn to the Torah, you turn to ritual.”

This reporter is a Pittsburgh native who visited Squirrel Hill in July. Even on an ordinary summer Shabbat, the neighborhood is different — from how it used to be, and from any other Jewish neighborhood.

People make their way to shul. Women in long skirts and kippah-clad men walk through the streets, offering each other hellos and Shabbos greetings. Parents walk hand-in-hand with their children along the sidewalks, or chase them as they zip along on their bicycles. Lawnmowers roar to life in the distance. The city wakes up.

But the shopkeepers along the busy commercial arteries unlock doors adorned with signs proclaiming “No Place For Hate.” The strolling families pass front yards dotted by signs driven into the ground with the words “Stronger Than Hate” alongside the three-diamond Pittsburgh Steelers’ logo altered by the addition of a Star of David. Armed security guards stand at the ready before synagogue doors.

In the days following the massacre, Pittsburgh’s Jewish community was thrown into a surreal new reality. “That stuff happens in New York, Chicago, Los Angeles, big international cities,” said Rabbi Daniel Wasserman, the rabbi at the Orthodox synagogue Shaare Torah and a leader of the Chevra Kadisha, a Jewish group that was responsible for the care and burial of the victims’ bodies. “It doesn’t happen in Pittsburgh.”

In the weeks and months following the massacre, Squirrel Hill became the newest site of a mass shooting. Groups from Parkland, Florida and the Emanuel African Methodist Church in Charleston, South Carolina visited in acts of solidarity. Since then, of course, many places have been added to that list — El Paso and Dayton just this past weekend. The Tree of Life gunman attacked because he was convinced that Jews bring in “invaders that kill our people.” The El Paso gunman cited a “Hispanic invasion.” White nationalist shooters have been responsible for 65 deaths in seven incidents in the past year and a half, according to the New York Times. The FBI counted about 7,000 hate crime incidents in 2017, up 17% from 2016. 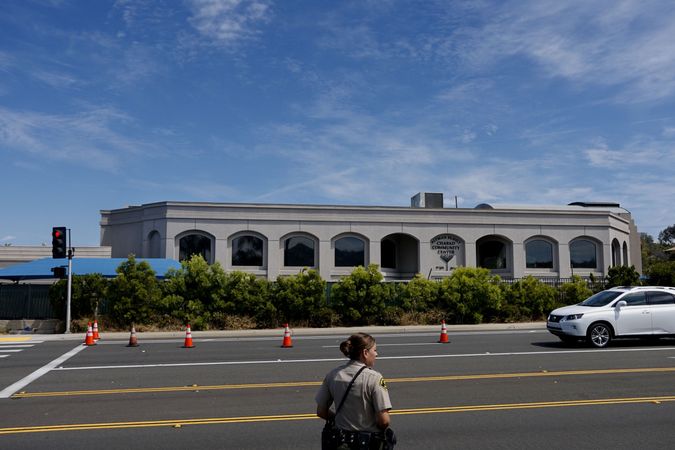 Less than a year after a white supremacist gunman killed 11 worshippers at a Pittsburgh synagogue, the community is in mourning again as the somber holiday of Tisha B’Av descends. Image by Getty Images

Pittsburgh’s Jews said they have no simple answer as to how they are doing. It is difficult to find words that adequately express the ways in which they’ve changed when everything feels different. They are working on coming to terms with Pittsburgh’s name being etched into the history books, the 11 dead remembered by many as martyrs.

“The shooting certainly comes up every single day,” said Markiz. “It’s about holding the impossible. It’s about trying your best to juggle it all.”

Squirrel Hill resident Yikara Levari, a mother of six and assistant principal at Hillel Academy, a Jewish day school in the neighborhood, noted the correlation between the historic hatred and violence Tisha B’Av commemorates and that which persists today.

“It was here, so that’s the obvious part,” she said. “I don’t know what one Tisha B’Av will change. Already everything has changed.”

Many said that they will figure out Tisha B’Av as it happens, just like the past nine months. “I think it’s a little hard to know because it hasn’t happened yet,” said Levari. “Every step of this, we’re learning what to do.”

In the service, the community is striving to strike a balance between acknowledging, but not fixating on, the massacre. Counselors will also be available in the event that anyone attending feels they need emotional or mental health support. Two therapists, as well as therapy dogs, will be on hand outside of the sanctuary.

“We knew it could really be a traumatic event this year,” Small said. “We don’t want to make [Tisha B’Av] where it’s all about October 27. It’s overall depressing and sad and tragic.”

Around events like Tisha B’Av, people often react as they did at the time of the tragedy, she added. She expects people might feel irritable, anxious or have trouble sleeping. The mass shootings in El Paso and Dayton might exacerbate an already intense emotional experience.

At Beth Shalom, the congregation will add something to their traditional service, Markiz said: the “Tales of Destruction and Rebuilding,” program in which speakers from across Pittsburgh will share their stories of hurt and resilience. The guests will include some from the South Pittsburgh Peacemakers, a group that tries to prevent shootings by identifying and defusing conflict, and Casa San Jose, a Hispanic community advocacy group. By bringing these testimonies together with the Book of Lamentations, leaders plan to reflect on the October 27 massacre, trying to make sense of how it fits into the broader stories of the Jewish and Pittsburgh communities.

Markiz said he sees a heightened interest in maintaining not only strong ties across the Jewish community, but in building interfaith and interracial relationships as well. “While I had an interest in it before, it feels profoundly different now,” he said. “Some days feel really scary and some days, where I get the chance to build community with people who are different than me, feel really hopeful.”

Others are building community in different ways. A group of 20-somethings who grew up attending Tree of Life recently created a young professionals group at the synagogue, inspired to become more involved in their religious community following the events of October 27.

“People are okay because they have to be okay,” said Wasserman of Shaare Torah. “It’s a matter of incorporating it into daily life and figuring out how to build on it.”

In the past couple of weeks, the Jewish Chronicle, a community newspaper that goes to print each Tuesday, published its first issue since October 27 without a Tree of Life story. But that issue is likely an anomaly, said senior staff writer Toby Tabachnick, and she expects coverage of the synagogue in the aftermath of the massacre to continue.

“Now I think we’re different,” she said. “I hope people can find enough comfort that they can still feel joy.”

Lamentations doesn’t end on anything close to a joyful note, but its final line does evoke hope in words that are woven throughout Jewish liturgy, and spoken on happy as well as sad days.

“Take us back, O Lord, to yourself, and let us come back,” the reading concludes. “Renew our days as of old.”

Miriam Finder Annenberg is a Chicago-based reporter. She grew up in Pittsburgh, Pennsylvania.