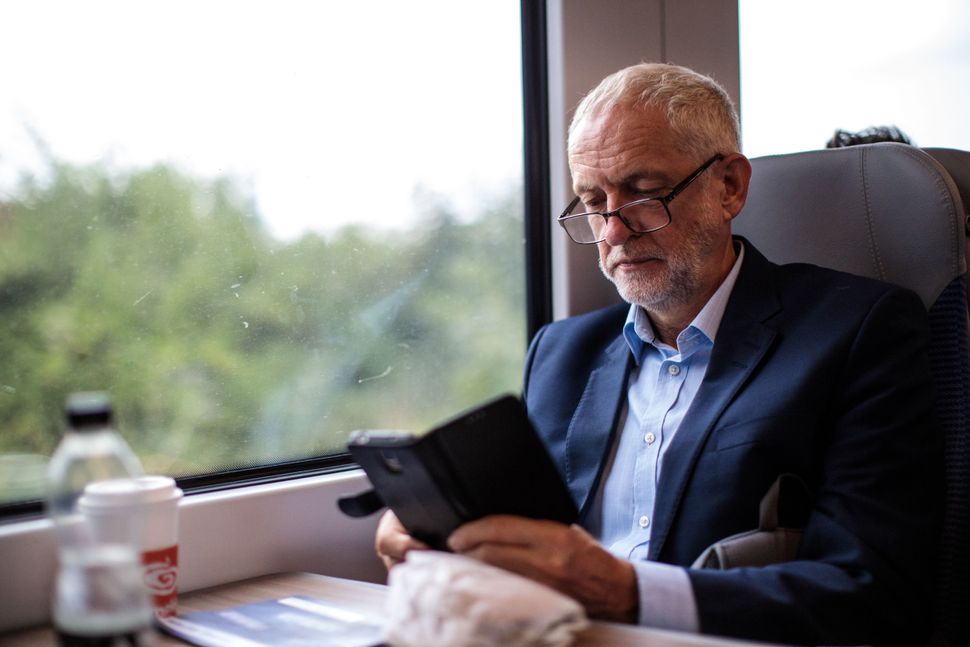 What happens when a British Jew who feels Jeremy Corbyn jeopardizes his family’s safety runs into the Labour party head on the train? Image by Getty Images

I was rushing back from Leeds on business and was deep in thought as I stood on the platform waiting for the train at Kings Cross station that would take me home. I was suddenly startled when I saw Jeremy Corbyn out of the corner of my eye. I had to do a double take, seeing this national figure in real life. This, here, was in-the-flesh “Jeremy” — the TV caricature, this politician whose words had begun to filter into almost every conversation I had with my Jewish friends. Right here.

For four years we’ve been pointing out anti-Semitism in the Labour Party – both Jewish MPs and several others who are good allies of British Jews have left the party in protest. Now there’s even an investigation into Labour’s anti-Jewish threats and bias by the independent Equality and Human Rights Commission, because for four years Corbyn’s done nothing about this problem. Things are so serious that, for the first time ever, the Chief Rabbi published an op-ed in one of our national newspapers raising the community’s concerns about the Labour Party. I couldn’t not say something to this man. I couldn’t leave it.

My thoughts went to the 1930s. To Hitler. To the Jews staying silent. To others staying silent, not speaking up on behalf of the Jews. I had an opportunity to say something. Something. And if I didn’t I would regret it for months. I am a parent of four children. How could I not speak up to protect their future?

I was taken aback at how my own thoughts had leapt to this — how binary things had become now. With this election, we are face-to-face with a problem. As I boarded my train, he also got on – with a couple of advisers who looked like they were recent university graduates. I was amazed at the lack of security around him, given that the campaigns were underway.

I followed him. Not sure what I was doing. I just went with my instincts. He took a seat and I sat next to him. As the train started moving, I inadvertently startled him by asking him a question, “How is your campaign against anti-Semitism coming along, Jeremy?”

Though politicians should surely expect conversations on public transport, his eyes rolled and his adviser intervened, complaining that I had taken his seat and that Mr. Corbyn wasn’t taking questions at this point. This made me more determined to have this conversation, and my resolve to stay with him strengthened further. It made me a little more emotional. I asked about the most notorious of the accusations against him, that he had honored a member of the Black September group who murdered the 1972 Israeli Olympic athletes: “Jeremy, how did it feel to lay down a wreath on behalf of a terrorist?”

This made him answer. But not to me as a person, or even as a Jewish voter. He went into rehearsed politician mode, with generalizations, sounding just like he does on the telly: “I denounce all forms of anti-Semitism and racism.” I just couldn’t believe these empty words. I told him that the failure under his leadership to stamp out anti-Semitism in his party implied that anti-Semitic behaviour is acceptable in the Labour Party. I told him he is at least partially responsible for a situation where Jewish people like me, part of a tiny minority, feel genuinely scared to live in this country.

Again, he said that no one should ever feel like that and that I should not believe “all the media hype.” Hype? Hype! I felt I’d been classified as “just another paranoid Jew” for asking about what one of his own Labour MPs had called “institutional antisemitism.” Just like he blamed us on the telly. What a way for the leader of the party that prides itself on its “anti-racist” values to behave.

If I wasn’t important enough for him to talk to on my own, maybe he’d come to my constituency. I invited him to come and talk in Borehamwood, the area with the fastest-growing Jewish population in Britain. He declined, and he didn’t seem to regret it. At least, he didn’t say so.

He put his head down to read his phone. He didn’t seem like a party leader in the middle of an election campaign, trying to convince a country to vote for him. He seemed like a quiet man happy to avoid talking to the people around him. I was bringing up a major topic in the biggest election campaign of his life and he seemed disinterested in discussing it with me or anyone around me. Quite apart from the serious problems of anti-Semitism, how could Corbyn lead us when he doesn’t even seem that interested in us?

If Boris Johnson had been on the train, it would have been an event. He would have stood up and answered, he’d have shaken everyone’s hand! He probably would have invited others to join in. He would have milked the opportunity for his own political gain — even if he was faking it, he would have at least played the game. Corbyn didn’t even see this as an opportunity to publicly settle a major disgrace in his campaign. I spoke with him for about ten minutes before I left to sit somewhere else.

Interestingly, no one else joined in the conversation. It’s a train I often take, and I know there were a lot of Jews on that train. Everyone stayed quiet. There was one Labour supporter who during my conversation stretched over to shake Corbyn’s hand — almost as an act of defiance. Again, that just made me want to dig in. To fight. To protect our future generations.

I tweeted Corbyn to reiterate the invitation to come to Borehamwood. I offered to organize a balanced Q&A, so he would have the chance to be properly understood. He ignored me. Of course he did. It was a big moment for me to meet with him, but I’m sure he will only remember it, if at all, as a source of irritation.

I had taken my chance to ask the question, I felt I’d done my best, but it hadn’t changed anything.

I feel real trepidation about the forthcoming election. Choosing between the two main parties comes down to which is the lesser of the two evils. Corbyn offers a threat to my personal security, to my family and to my community. Johnson’s maverick behavior makes it obvious he can’t be trusted, and he has made horribly racist comments about Muslims. But however flawed, he’s much more of a leader and, despite everything, I would continue to feel safer in this country under his leadership.

It’s odd, because the U.K. as a whole is a moderate country, yet there’s not a clear established moderate party to vote for. The Liberal Democrats are clear Remainers, but have never had more than 10% of the 650 members of parliament and Jo Swinson, their current leader, has only 12 now. But the two parties who have run the country for hundreds of years are now under control of extreme factions, one led by a liar and one by an anti-Semite.

This is a dilemma for so many of us Jews – and perhaps some non-Jews too. I don’t want to leave the EU and think that Corbyn and Labour, with their message of “another referendum,” are still our best chance to Remain. Yet my family’s safety overrides everything else, so I can’t choose Labour. On December 12, I will vote for Jo Swinson and the Liberal Democrats —not because I believe she can win, but to prevent Corbyn from winning.

Jonathan Friedman is a Senior HR Transformation Manager and an amateur triathlete born in Leeds and now settled in London with his wife and four sons.