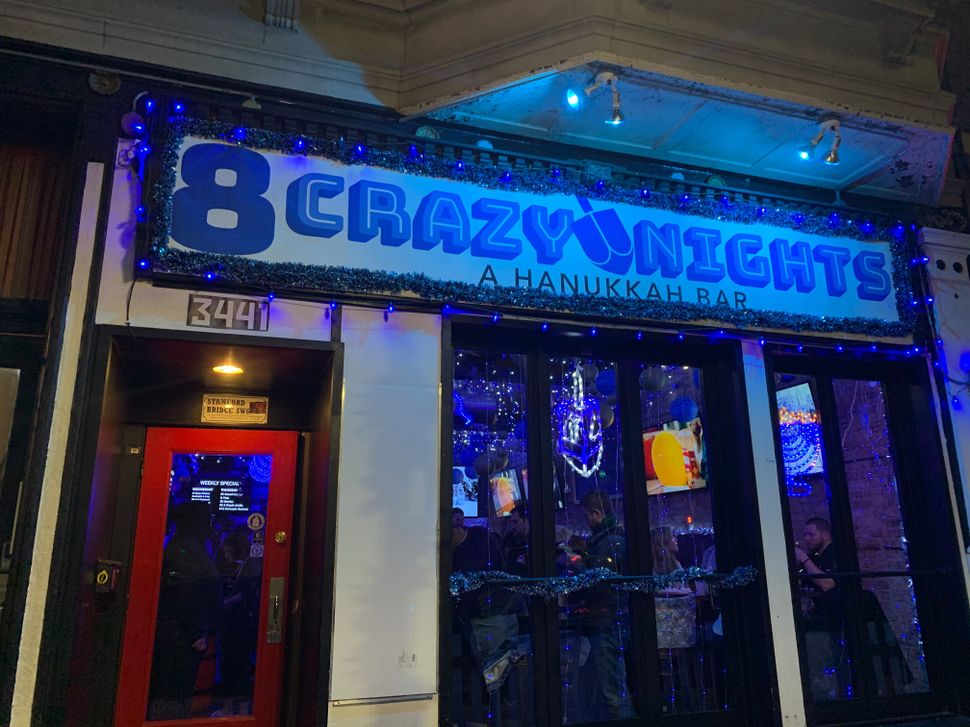 Chicago is known for its love of Christmas-themed bars, and this year, two non-Jewish boite owners went in a different direction. Image by Amy Balmuth

I’ve been to my fair share of Christmas-themed bars, which I enjoy just as much as the next Chicagoan. As a Jew, however, I’m maybe more able to take a step back and ask myself: Is this what Santa would have wanted? Could an elf kick back and relax here? How many Candy Cane martinis are too many Candy Cane Martinis?

The atmosphere is an acquired taste, kind of like the aforementioned martinis. It’s hard to frown inside what is essentially a life-size snow globe. Yet the gleam of ornaments and reindeer headwear lack pizzazz when you’re not, well, Christian. I find myself jostled at a crowded bar and realize the spirit of Christmas will not help me get the bartender’s attention — and actually, this is not my holiday. I am not required to make merry.

Chicago is glutted with these kinds of bars. Come December, entire neighborhoods appear gentrified by the Whos from Whoville. In just a three-block stretch of Clark Street in the Wrigleyville section, there are eight Christmas pop-up bars. Yet this year, one boite in the same spot glows blue like a bioluminescent jellyfish in the seasonal sea of red and green. The neon dreidel in the window and Adam Sandler reference in the pop-up’s name make it clear what’s going on here. I visited with a bunch of buddies on Saturday, December 28 — the seventh night of Hanukkah — and I can say with authority: This is not your Gentile friend’s novelty bar.

8 Crazy Nights is a Hanukkah-themed pop-up bar housed inside The Graystone Tavern. Bar owners Sam Stone and Kyle Bagley had the idea to buck the Christmas trend and create something different. They decorated the place themselves, stapling over 10,000 string lights to the walls and wallpapering the restroom doors with dreidel-patterned gift wrap. Cheesy Hanukkah sweaters are pinned to one wall, bidding visitors a “Happy Challah Day.” One patron, Jackson, had asked if they were for sale but alas, Bagley and Stone are saving them for next year’s decorations.

“It’s very nice because people are grateful that we’ve done this,” said Bagley. “Especially because we aren’t Jewish — and that is ok with folks.”

The crowds speak to the pop-up’s success. Originally scheduled to close down at the end of December — and Hanukkah, which ended Sunday night — 8 Crazy Nights will remain open in early January, due to popular demand. Word spread through social media, and understandably so; the string lights and paper lanterns are Instagram-bait. In a 10-minute window, I was designated photographer for not one but three groups of fellow millennials schmoozing over punch bowls Manischewitz Sangria.

Bagley and Stone did their homework. And while the bar is frequented by Jewish and Gentile patrons alike, the menu offerings and décor provide the delights of Hanukkah in abundance. The bar serves Sufganiyot donuts with plastic syringes of vodka-infused jelly and Challah grilled cheese. (The food is not certified kosher.) Specialty cocktails are dubbed “The Chosen MF” and “Mazel Tov.”

Stone and Bagley consulted Jewish groups in Chicago, like ChiTribe, to ensure the pop-up remained respectful and true to the spirit of Hanukkah. “We knew Jewish folks would receive it well, but we didn’t know how other folks would be. Everyone else was green and red, we are white and blue,” said Bagley.

Rachel, resplendent in a menorah-emblazoned knit sweater, was excited for the space to celebrate Hanukkah. Her mom read about the bar online and encouraged her to check it out. She pointed me to the unfinished wood menorah in the corner and confirmed that it was a menorah Shotski set up to facilitate drinking games. Adam Sandler would approve.

“I can’t believe this is the first Hanukkah bar in Chicago, because frankly there should have been one ages ago,” said Lexie, who is not Jewish but enjoyed her “Mensch Mule” nonetheless.

8 Crazy Nights deals in sincerity alongside gaudiness. Reboot, an arts and culture non-profit focused on “reimagining and reinforcing Jewish thought and traditions,” set up a Post-It note wall asking for six words on how people want to “give light” in 2020. But in true drunken spirit, there’s not much room to reflect on the meaning of Hanukkah. It’s a bar, after all. Many of the Post-It notes pitched phone numbers of self-advertised Nice Jewish Boys and Nice Jewish Girls, creating a brick-and-mortar JDate of sorts. 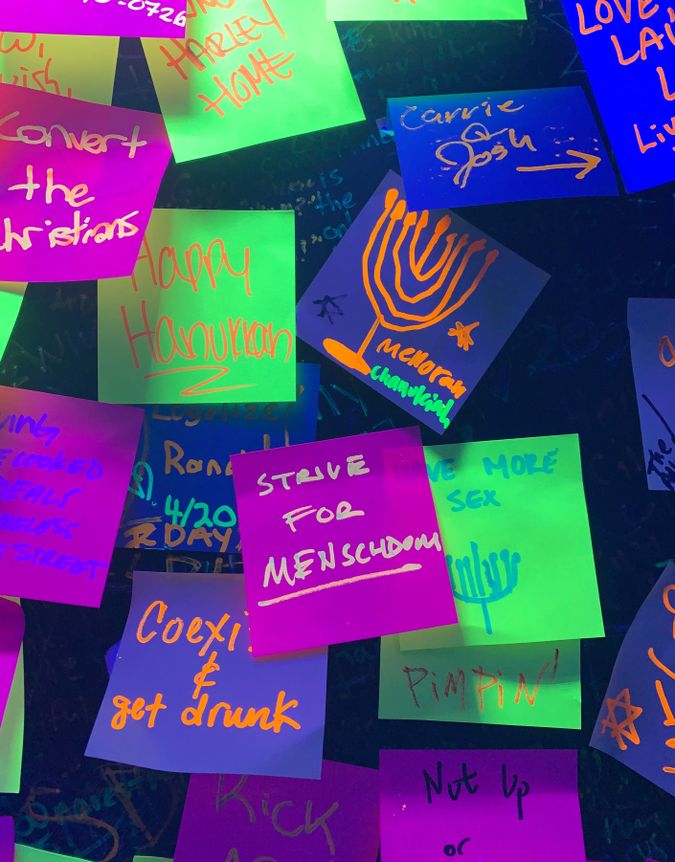 In many parts of the country, to be Jewish in December is to be a little (or perhaps a lot) left out. Hanukkah blessings don’t have the same star power as Mariah Carey’s “All I Want for Christmas Is You.” I believe Adam Sandler said it best: “There’s a lot of Christmas songs out there and uhhh… not too many Hanukkah songs.”

There are a lot of Christmas novelty bars and uhhh… not too many Hanukkah ones. Now, luckily for Chicagoland Jews, there is. One. It’s a small change to seasonal drinking culture, but it is always fun to feel included. Chicagoans at 8 Crazy Nights are buoyed by Hanukkah Harry shots, for sure, but also by their community and the novelty of strangers sharing the same garishly lit, dreidel-dotted space.

The opportunity to celebrate a meaningful tradition in a public space, alongside strangers who support you, is what makes 8 Crazy Nights valuable. After a year wracked by stories of hate crimes targeting Jews and other minority groups — including a stabbing in an Orthodox village in the New York area that happened while I was out with my friends at 8 Crazy Nights — a blue-lit Hanukkah bar reminds me that a more inclusive community may persist after all.

I can’t say whether Santa would like 8 Crazy Nights, or what the elves would think. But I have a strong feeling that Drake would enjoy kicking back with a Gelt Martini and — for me — that is the spirit of Hanukkah.

Amy Balmuth is a Chicago-based writer. Find her in real life riding the CTA, or online at www.amybalmuth.com.