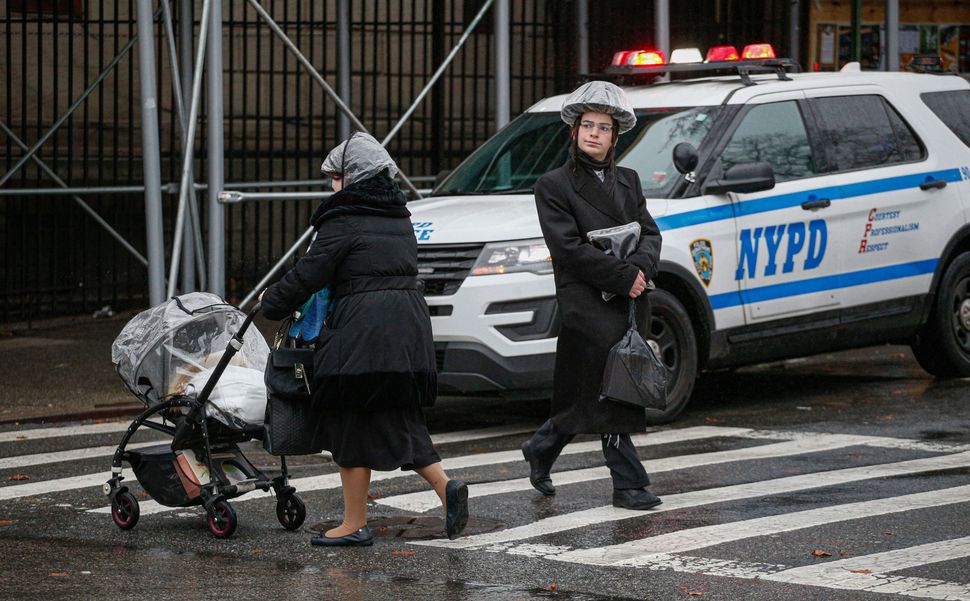 New York City has bulked up its street patrols in Orthodox neighborhoods, but individuals are also considering buying weapons. Image by Getty Images

After this month’s deadly anti-Semitic shooting in Jersey City, B., a Haredi resident of Brooklyn, got a Whatsapp message from a friend.

“Time to get a gun,” the message read in part.

So B. took a trip upstate and bought a firearm, and a week later, returned to learn how to aim and shoot.

“It’s not like we’re planning to have another Holocaust or planning for another pogrom, but these things have happened, so why not own one?” said B., who asked to be identified only by an initial due to concerns about harassment. “Why not just have a chance in case something goes batshit?”

Seventy percent of American Jews think that controlling gun ownership is more important than protecting gun rights, according to AJC’s 2018 Survey of American Jewish Opinion. But Orthodox Jews say chatter about buying guns has gotten louder in the community after a spate of anti-Semitic attacks concentrated in the New York metropolitan area.

After yet another anti-Semitic act of violence this weekend during which a man charged in on a Hanukkah celebration and stabbed five people, B. brought his gun to Monsey to show his fellow ultra-Orthodox Jews that guns are legal and accessible. He stood with his gun visible for two hours and said he received messages of support online.

“I do feel safer that people are showing interest and, as a community, people are ordering guns,” he said.

Possessing a handgun in New York City requires a permit separate from the process in the rest of the state. But Jews in Monsey and other areas are free to own handguns after they purchase them, pass a background check and register the weapon.

In addition to Jewish individuals arming themselves, communities impacted by anti-Semitic violence have heightened security with locks, alarms and security guards. Incidents like the one in Monsey are intensifying this trend.

The UJA-Federation of New York and the Jewish Community Relations Council of New York announced a new director for the $4 million Community Security Initiative today, which provides security training for Jewish institutions in the New York region.

“One important dimension is security, and we need to have an appropriate security infrastructure,” said Eric Goldstein, UJA CEO, in a phone interview.

Rockland County, which includes Monsey, is using armed guards from a private security firm, Brosnan Risk Consultants, in addition to its own police. The company is providing the guards free of charge for an indefinite period.

The firm tracks crime threats online and reports them to security officers on the ground, who are serving an undisclosed list of synagogues in Rockland that feel threatened by anti-Semitism. The firm is also encouraging residents to “fight back” and at a press conference today, the company’s head commended Monsey congregants for throwing furniture at their attacker.

But for some Orthodox Jews, the prospect of armed guards and vigilante protection from anti-Semitic violence isn’t quite so reassuring.

“I do hear very many people saying, ‘Oh, we need a gun; we can’t rely on anybody; we need to be able to protect ourselves,’ and everybody wants a gun and everyone wants weapons and every synagogue now needs an armed person,” said S., a Haredi Brooklyn resident who spoke under the condition of anonymity because he feared a backlash. “It sounds to me like everyone is losing their collective minds.”

S. bought his first gun in 2014 and was licensed to carry in 39 states. He said he did not want to be a “target” and felt like “Jews are weaklings that get picked on.”

But three years ago, he surrendered his guns to the police after realizing that he was “endangering” himself and his family, and that “living in a sense of defensiveness” was harming him and his community.

“I feel very strongly that the community really needs to look elsewhere other than knee-jerk reactions,” he said. “It’s a false sense of security that doesn’t speak to both what we need to change as a community to counteract hate, and also doesn’t really practically solve anything.”