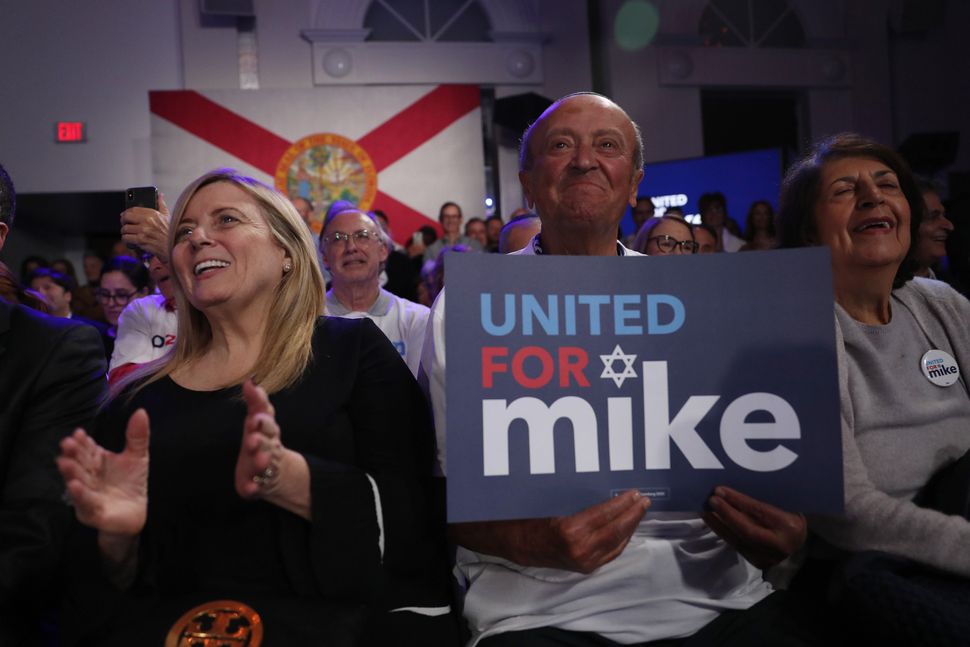 For a Boston boy who spent most of his life in New York, where he made a vast fortune and was thrice elected the city’s mayor, Mike Bloomberg’s pitch for the American Jewish community’s support in South Florida felt like he was playing for the home team — the ethnically diverse, politically moderate Jews of Miami.

“I didn’t know if I should start with shalom or saludos,” he said in his opening remarks to the crowd assembled in the Aventura Turnberry Jewish Center, a large Conservative synagogue here. This Jewish community, America’s third-largest, is home to Jewish transplants from Venezuela, Argentina, Colombia and Cuba, to name a few — not just New York.

Having established his bona fides as an honorary Miamian who appreciates the Latin influence and remembers the Jewish delis of Collins Avenue, he made a sharp-elbowed segue to politics: why the audience, and their friends and family across the country, should vote for him, and not the other Jewish septuagenarian in the race.

“I know I’m not the only Jewish candidate running for president, but I am the only one who doesn’t want to turn America into a kibbutz,” he said.

That kind of smack at Sen. Bernie Sanders might not be entirely welcome in more progressive corners of the American Jewish community, but here, it seemed to play well. In Miami, and ostensibly in some Jewish communities around the nation, the uber-progressive politics of Sanders and Sen. Elizabeth Warren can look undesirable or simply unelectable in the face of President Trump’s unbridled populism and jingoism. And for some of the newer Jewish immigrants making their mark on the Florida scene, from South Americans to Russians to Israelis, a candidate whose agenda smacks of socialism or communism is one they would studiously avoid.

One of the speakers who introduced Bloomberg, Patricia Halfen Wexler, was born and raised in Venezuela. A managing director of the venture capital firm Starlight Ventures and mother of three, she moved to the United States in 2000 to pursue a graduate degree at Bloomberg’s alma mater — Harvard Business School.

“I guess I’m by nature a moderate, and I think he balances the key issues in the right way, and can really bridge the insane divide that we now see,” she said in an interview after the speech.

It was a typically idyllic January Sunday in South Florida, bathed with sunshine and temperatures in the low 70s, providing a comfy place for “United for Mike” — the launch of Bloomberg’s campaign with the larger Jewish community. On sale were T-shirts that read “Mishpucha for Mike” and pins with his name in Hebrew. About 800 people attended, according to the campaign.

Bloomberg, who was the first to name a Jewish outreach director — former Forward columnist Abigail Pogrebin — has already done similar events for other groups: “Women for Mike” in New York City and “Veterans and Military Families for Mike” in Fayetteville, North Carolina.

But Sunday, he was talking to his own.

“I’m glad to see so many of you came to synagogue today,” he deadpanned, mimicking a rabbi starting a High Holidays sermon in a way that elicited hearty laughs. 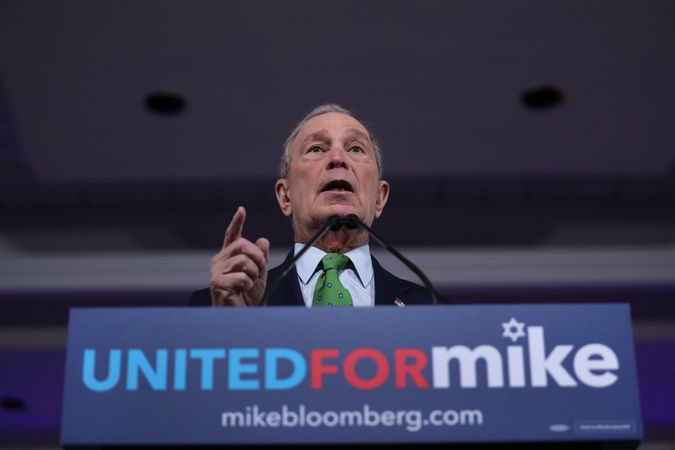 Saul Kravec, an attorney who lives in nearby Broward County and was wearing a “Mike 2020” button written in Hebrew, especially likes Bloomberg because of his views on Israel. A classic swing voter in this deeply purple state that has helped decide close presidential elections, Kravec, like many Floridians, isn’t registered with a party. But he’s planning to sign up as a Democrat this time around, just so he can vote for Bloomberg in the state’s March 17 primary.

“I don’t like the way Israel has been used as a tool to divide people,” Kravec said. “That should be something that remains bi-partisan,” he added, echoing the extensive comments Bloomberg made in the speech to explain how his pro-Israel agenda differs from Trump’s.

Indeed, Bloomberg told the crowd that Israel shouldn’t be used as a partisan football, and they would never need to choose between Israel and the United States if he were president. He noted that he was against the Iran nuclear deal reached by Obama that Trump has since withdrawn from, adding that he thought it should have done more “to address Iran’s financing of terrorism.”

Taking a dig at Trump’s efforts to plant the flag of pro-Israel politics in exclusively Republican territory, Bloomberg promised a different approach. “If I am president, you will never need to choose between supporting Israel and supporting our values here at home.”

That messaging was likely aimed at Jewish Americans who are sometimes torn between their progressive values and their Zionism. If their love for Israel were a relationship status on social media, it would have to be marked “It’s complicated.” But they don’t like Trump telling them that only Republicans are “loyal” Jews.

It was also a speech for Jews who are fed up with a lack of moral leadership and troubled by anti-Semitism. Bloomberg didn’t mention Trump by name and he didn’t talk about impeachment. But he nonetheless laid responsibility for the uptick in anti-Semitism at Trump’s feet, citing the moment when the president referred to white supremacists who marched in Charlottesville in 2017 as “very fine people.”

Robyn Tauber, one of the founders of the Jewish school attached to the synagogue that hosted the event, said she’d be hosting a salon in her home next week for “Mike,” as he’s generally called by his supporters. Bloomberg doesn’t need donations to plow ahead, but he does need an army of acolytes to spread the gospel. “Now he needs to go up to Orlando and be in the middle of Florida,” she said. “He needs to tell people what he’s about. People need to know that he’s got real integrity. He knows how to build things. He is the antithesis of Trump.”

Religious Jews, too, found something refreshing in Bloomberg’s speech: a presidential candidate who doesn’t downplay his Jewishness, as some accused Sanders of doing in his 2016 campaign — although this time around, Sanders has also named a Jewish outreach director and published an essay on his Jewish identity.

Still, Bloomberg tried to play up the contrast between them by quoting a Torah verse in connection to Trump’s agenda towards immigrants: “Do not stand idly by while your neighbor’s blood is shed.”

Rabbi Joseph Telushkin, the author of several best-selling books about Judaism, also took the stage before Bloomberg to sing his praises. Telushkin told the Forward that he’d never endorsed a candidate in such a way before, but that there has never been a moment like this before.

During his speech, Telushkin quoted a famous bit of wisdom from Pirkei Avot, a collection of ancient Jewish aphorisms: “You are not obligated to complete the work, but neither are you free doing all that you can get it done.” That, he said, is what Bloomberg exemplifies to him.

“Mike Bloomberg is a man that does all that he can to get it done, and like the biblical figure he is named for, Mordechai, he motivates people around him to do all that they can as well,” Telushkin told the crowd.

Some will look at Bloomberg and see a billionaire businessman who hardly fits the mold of a dedicated Democrat, but to others, this only increases his crossover appeal. It is precisely because he isn’t a starry-eyed idealist, a burn-it-down revolutionary or a pacifist that he could gain middle-of-the-road Democrats and disillusioned Republicans.

“Can he resonate with red counties in places like Ohio and Kansas and Pennsylvania? Does he have the charisma to gain their votes?” asked David Gray, 53, a publisher and adjunct professor of business who splits his time between New York and Florida. “I’m not sure.” But his girlfriend, Alisa Lau, 28, an actress from Carroll, Iowa, said she thought he could, if he focused on family, health, education and climate change.

The candidate finished his short speech with one double-armed wave to the crowd, then and took off without hanging around to shake hands with supporters and take a hundred or more selfies, which has become de rigueur for many candidates.

As everyone gathered their things and moved toward the exits, many noted that Bloomberg was more of the billionaire that Trump wished he could be, which explained why he didn’t need to seek contributions.

“Mike is asking not for donations, but for hearts and minds,” Pogrebin told the crowd. The next step would be spreading the word further, asking supporters to host “Bagels for Mike” breakfasts. “If you get the bagels and friends,” she quipped, “we’ll get you the talking points and the really nice swag.”