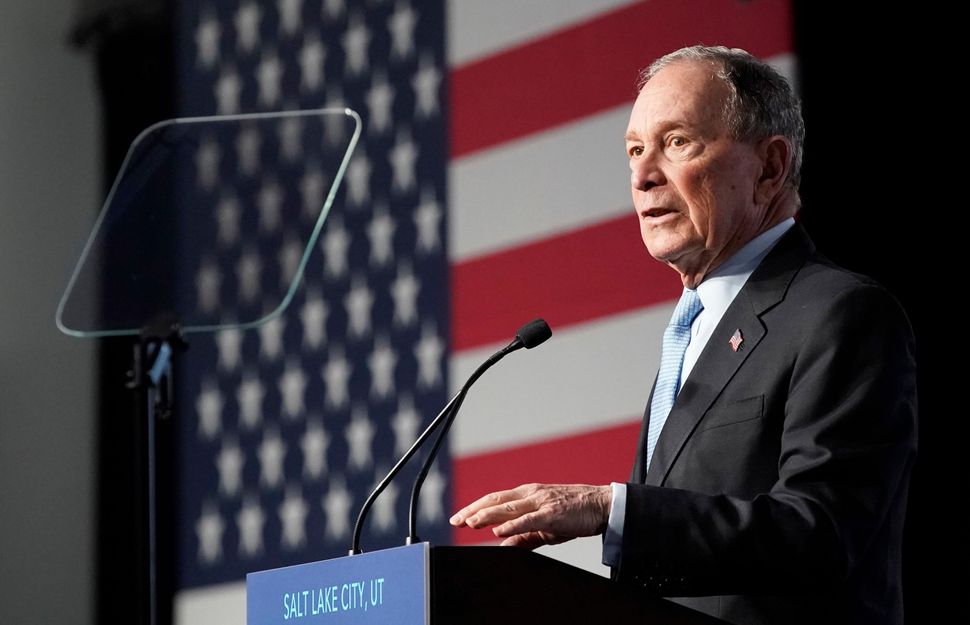 For twelve years, former New York mayor Mike Bloomberg oversaw the city with the world’s biggest Jewish population. And many, it seems, are still grateful — especially the Democrats.

A new Siena poll found Bloomberg in the lead among that group, with 28% supporting him, nearly double the response for second-place candidate Pete Buttigieg, the former South Bend, Ind. mayor, and far ahead of Sen. Bernie Sanders, who was was in sixth place with just six percent of the Jewish vote.

The country’s largest Jewish community is in New York, where more than 1.1 million Jews live, and where the Democratic primary takes place on April 28. The poll’s result tracks with what experienced New York Jewish politicos are seeing and hearing – community members liked Bloomberg then, and they still like him now.

That could be true even for the Orthodox, who comprise 40% of New York’s Jews, compared with only 10% of the country’s Jews. While only a quarter of American Jews voted for Trump in 2016, 39% of the Orthodox did. Among the Democrats, only Bloomberg stands a chance with that demographic, said Ezra Friedlander, CEO of the Friedlander Group, a consulting and public policy group.

“If any Democratic nominee could make a play for the Orthodox Jewish vote, it’s Mike Bloomberg,” Friedlander said. “Because he has a deep-rooted relationship with the Orthodox community. He doesn’t need a GPS to understand or navigate around the issues of concern.”

New Yorkers’ love for their former mayor is even more striking given that unlike past New York Jewish politicians, like Ed Koch, he never defined himself as a specifically Jewish candidate, and upon his inauguration had less of a connection to local Jewish life than even his non-Jewish predecessor Rudy Giuliani did, the Forward reported in 2007.

He offset this potential liability by making sure his staff was constantly up-to-date and available to address community concerns, even if he didn’t glad-hand himself.

“Could you hang out with the mayor? Probably not,” said Friedlander. “Was he a guy that would slap you on the back? Probably not. But in any administration, anywhere in government, senior staff is probably even more important than having the principal respond.”

Like many others in the city, Jewish voters credited Bloomberg with bringing down crime and reinvigorating the city after the September 11, 2011 terror attacks, said Sheinkopf, who has worked for Bloomberg in the past but does not work for his presidential campaign.

In contrast to his past campaigns, though, Bloomberg is making his Judaism a much bigger part of his outreach – making a speech in Florida about his relationship to Judaism and Israel, hiring multiple Jewish outreach liaisons and sending them to California and evenIsrael in search of primary votes.

And as part of his multi-million-dollar hiring spree, he’s employing or contracting with several figures who worked on Jewish issues in his mayoral office or on his election campaigns, including Jarrod Bernstein, Menashe Shapiro and Mark Botnick. Not all of them are working on Jewish issues this time around, but their experience will likely allow the campaign to avoid any unforced errors that could alienate Jewish voters. Indeed, Friedlander said that he’d noticed the Bloomberg campaign staffing up among experts in New York’s Orthodox community.

New York’s primary isn’t for another two months, but Bloomberg’s Jewish New York bump could help him sooner, particularly among snowbirds — older people who spend New York’s colder months in Florida and vote there. Florida’s primary is on March 17.