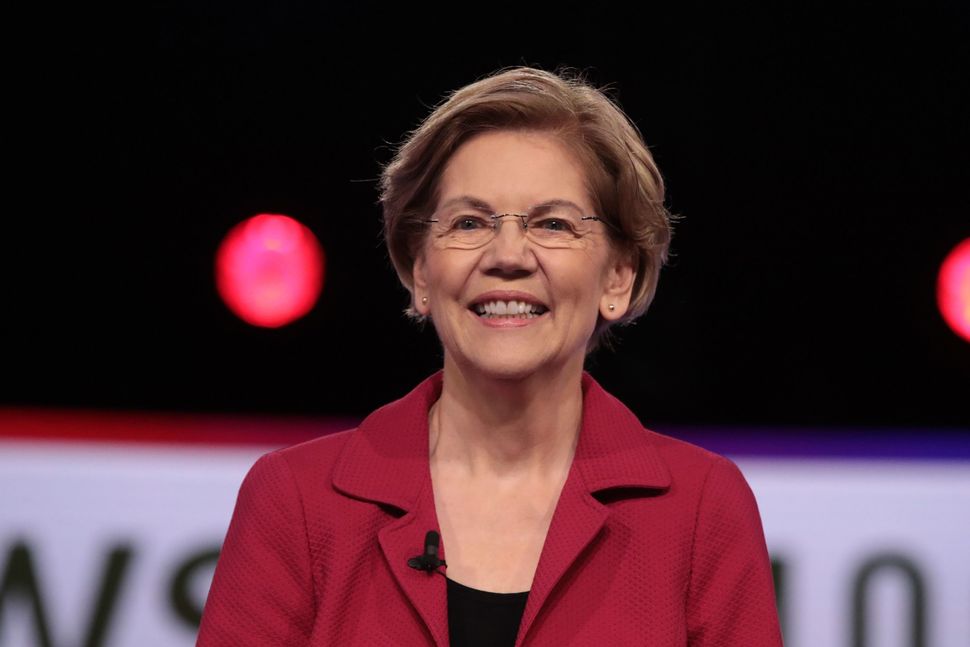 Rabbis have a clear favorite among the Democratic presidential candidates: Sen. Elizabeth Warren.

Warren received the most money from rabbis who donated to Democratic campaigns through the end of January, according to a Forward analysis of Federal Election Commission filings. Warren also had by far the most number of individual rabbis donating to her campaign – more than 50% higher than the next-best candidate.

“All the rabbis I respect the most in my life are Elizabeth Warren supporters,” said Rabbi Yohanna Kinberg of Congregation Kol Ami, a Reform synagogue in suburban Seattle. “I think it’s because she speaks truth to power with courage.”

Warren frequently speaks about how her Christian faith guides her principles. When asked in a debate in South Carolina on Tuesday to share her motto, she cited a verse from the Book of Matthew in the Christian bible: “Inasmuch as ye have done it unto one of the least of these my brethren, ye have done it unto me.”

Rabbi Arthur Waskow of the Shalom Center in Philadelphia said that even though it came from a Christian source, the sentiment to care for the downtrodden was a very Jewish one. “All that stuff in the Gospels is built out of Torah,” he said.

The Warren campaign did not respond to a request for comment Wednesday. But that same day, Warren published an op-ed for the Jewish Telegraphic Agency outlining her views on Israel, admiration for Jewish labor activists, and experiences attending Passover seders.

The Federal Election Commission requires candidates to report all donations from people who have given them at least $200 since the race began. And while it’s illegal for faith leaders to endorse politicians from the pulpit, they also have the First Amendment right to donate their own money to candidates of their choice.

The Forward searched FEC records for every donor who listed their occupation as “rabbi” or “clergy,” or who said they were employees of a Jewish organization (using similar methodology from our previous FEC analysis last year.) We then manually checked each donor to make sure we only tracked rabbis, and not non-Jewish clergy or non-rabbinic synagogue employees. We only tracked donations to the Democratic candidates still in the race, plus two recent dropouts who we found last year to have disproportionately high Jewish support: Sens. Kamala Harris and Cory Booker.

We discovered 87 rabbis who had made $200 in donations or more (seven of whom had donated to multiple candidates). And 25 – more than a quarter of them – were Warren donors, contributing nearly $13,800 in total. 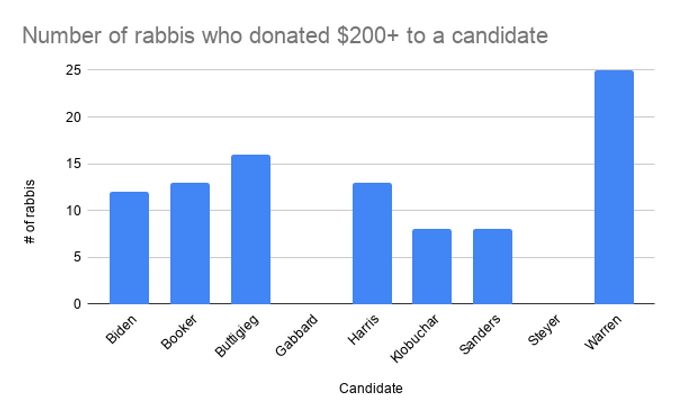 Graph displaying the number of rabbis who donated $200 or more to various Democratic presidential candidates. Image by The Forward 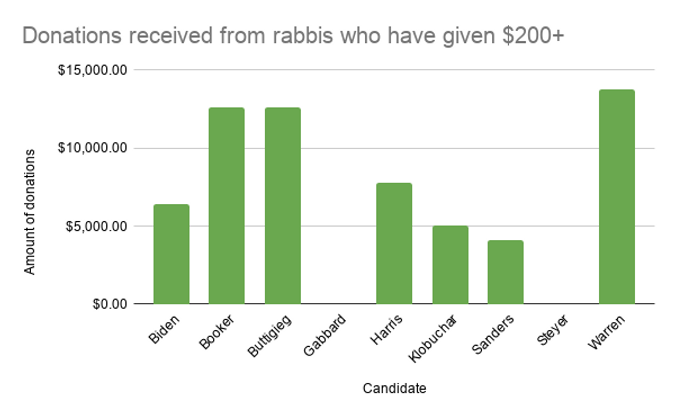 Graph displaying the amount of money donated by rabbis who donated $200 or more to Democratic presidential candidates. Image by The Forward

That amount is a drop in the bucket for the leading candidates — particularly Sen. Bernie Sanders, who has so many contributors that attempting to download his donor files repeatedly caused Excel to crash. And it doesn’t track support for former New York City mayor Mike Bloomberg, who is not accepting donations. Nor does it show donors who gave, say, $18, as many did — just people who sent enough $18 donations to get them over the $200 reporting threshold.

Former South Bend, Ind. mayor Pete Buttigieg, whom the Forward found last July to have received the most financial support from Jews overall, was in second place among rabbis with 16 donors and around $12,600 in contributions. Booker and Harris tied for third among rabbinic supporters despite having withdrawn their candidacies.

Still, the data shows where spiritual leaders’ hearts lie. And while they can’t endorse a specific candidate, they can use their pulpits and their influence to urge congregants to examine their political choices through a more moral lens.

“I think the role that rabbis do play is to make sure that their congregants are engaged — deeply engaged, thoughtfully engaged,” said Rabbi Samuel N. Gordon, who co-founded Rabbis for Obama in 2008 and works at Congregation Sukkat Shalom, a Reform temple outside Chicago. Gordon showed up in the Forward’s analysis because he paid to attend Buttigieg fundraising events in order to hear from the candidate directly. He said he was impressed by what Buttigieg had to say but stressed that he has not endorsed a candidate.

Polls have shown for decades that around three-quarters of Jews vote for the Democratic Party in general elections, making it one of the most pro-Democratic religious groups in the country. There’s less data on where Jews fall within the party’s ideological spectrum.

What is clear from the past few elections is that Orthodox Jews are increasingly likely to vote Republican. Indeed, the Forward could only identify one Orthodox rabbi who donated to a Democratic candidate.

Polling and donor data has also consistently shown that Sanders, who would be the first Jewish president, is less popular among Jews than among the general population. This seemed to play out in this study as well – Sanders, the overall financial leader, received less money from rabbis than even Sen. Amy Klobuchar, whose candidacy is a long shot.

Gordon said that many rabbis he’s spoken to about the campaign were upset that Sanders had decided to boycott the AIPAC Policy Conference – but noted that other rabbis were “absolutely supporters of Bernie Sanders.”

Yet Warren, the leader in rabbinic donations, was actually the first candidate to announce she was boycotting AIPAC. Indeed, that’s one of the reasons why Kinberg supports her.

“Not going to AIPAC is one of the most courageous things either candidate could do,” she said. “It will hurt them, but they’re not going because they know who they’d be standing in front of.”

Kinberg has long been a fan of Warren, even citing one of her first viral speeches from 2011 in a High Holidays sermon. As a female rabbi, she said, she had first-hand knowledge of the “non-hierarchical” way women can lead more effectively.

“When she does those selfies and the calls [to small-dollar donors] and all the things she does, what’s she’s doing is like Moses in the parsha we just had – ceding power, giving power to other people to help lead,” she said. “I love that idea – what she does is, she empowers others. And that’s the kind of leader I’m looking for.”

Unfortunately for her supporters, Warren has underperformed in the first few contests, and it is unclear how much longer she’ll stay in the race. Kinberg said she would support whoever got the Democratic nomination. And Waskow — an 86-year-old who along with his wife, Rabbi Phyllis Berman, was arrested last year at a climate protest — said the two of them also liked Sanders.

Last month, Waskow recounted, he got a phone call from a Warren campaign operative who wanted him to sign a statement of support from national faith leaders. “Phyllis and I talked about it,” he said, “and we said we would feel a lot better if they put together a statement by people of faith supporting both” Warren and Sanders.