Letter from Palm Beach: Santiago Lopez goes from the counter to the front lines 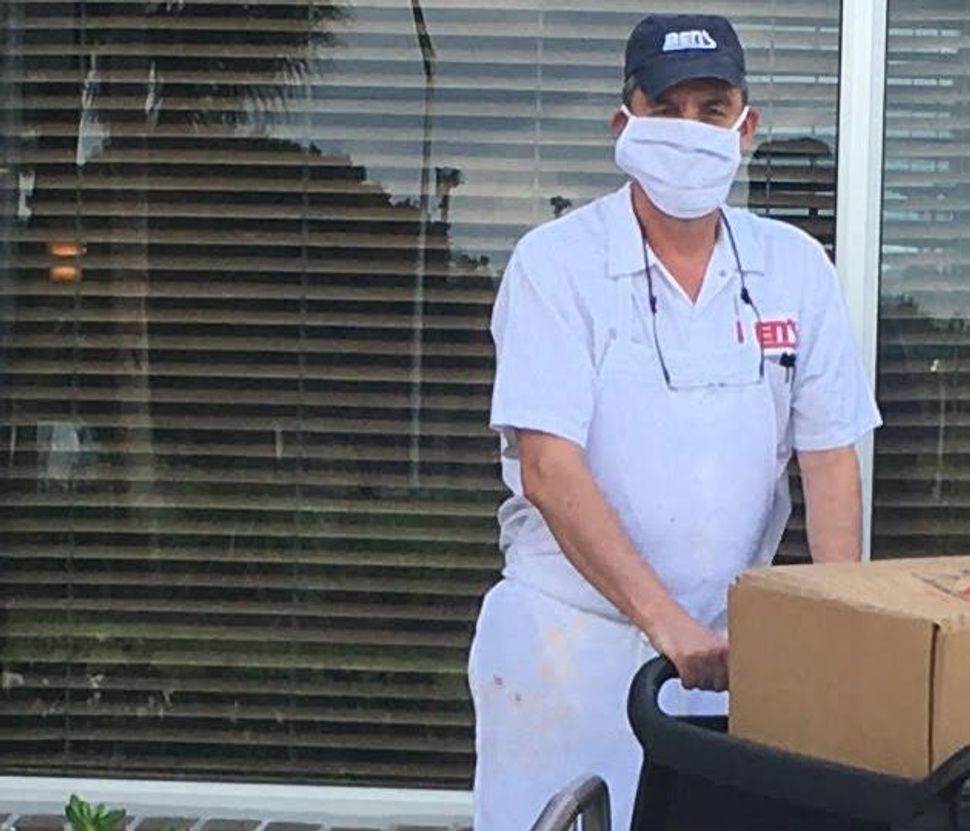 It is Wednesday at noon, just hours before the Passover holiday begins, at the Reserve Shopping Center in Boca Raton, Flor. Inside the cars lined up in neat rows outside Ben’s Deli, masked customers patiently wait for their kosher Passover Package — matzo, roasted chicken or brisket, haroset, the works. No one dares enter the restaurant. Instead, a man emerges, wearing his own mask, wheeling a cart full of take out. Some customer’s wave. A lot of them find themselves reflexively smiling — I know I do. The times and situation couldn’t be stranger, but the man is familiar. It’s Santiago Lopez.

On past holidays, Santiago would greet families at the counter, offering holiday wishes and reassuring embraces. If Ben’s is the Boca version of Cheers, where everybody knows your name, Santiago is Sam the bartender. Across the country, as delis, groceries and restaurants struggle to meet the demand of a community on edge, it’s the cooks, counter-workers and delivery personnel, like Santiago, who are keeping the businesses going.

And through it all, Santiago has continued to be something more: comforter, caregiver, listener.

It’s a role his long history in the deli business has prepared him for: When disaster strikes, the deli strikes back. 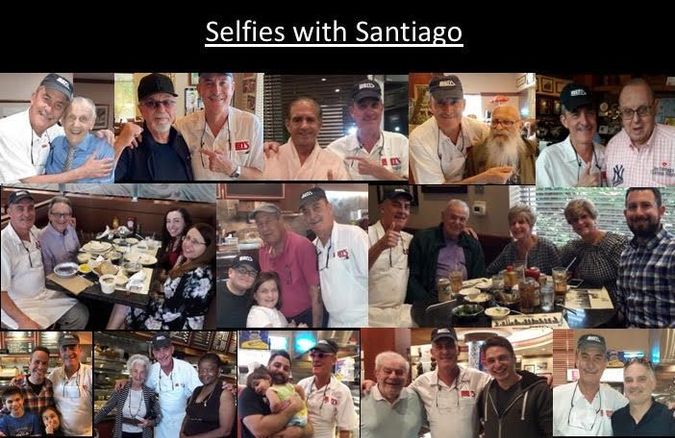 Santiago, 63, grew up in Colombia and moved to New York City at 17 with his mom and five siblings, including a twin sister. At 18, he started his career at the Carnegie Deli, apprenticing in the salad and appetizing department. He was the first Spanish employee among the Italian and Jewish members of Local 69 working behind the counter. During The Great New York City Blackout of 1977, when Carnegie ran out of rye bread, Santiago used potato pancakes to make sandwiches.

But it was during 9/11 that Santiago earned his frontline stripes. As catering manager at Mr. Broadway, Santiago directed and personally delivered five thousand kosher meals to emergency workers at Ground Zero.

“It was very stressful since we weren’t sure whether our deli might be the next terrorist target,” Santiago reflects. “But I had an incredible desire to help out all the firemen and volunteers.”

Santiago’s perspective on life changed forever after 9/11. He discovered that his customer Abe Zelmanowitz had perished while helping Ed Beyea — a quadriplegic colleague — in the World Trade Center. With elevators not working after the attack, Zelmanowitz chose not to go down the stairs and save himself, but rather stayed with Beyea to wait for a rescue team to carry Beyea down.

“Abe was a wonderful and caring person.” Santiago said. “I think of his sacrifice often, especially during challenging times when we are called upon to unselfishly help others.”

Now is clearly one of those times. It’s “a truly unique situation,” said Santiago. “With a hurricane, it hits and goes away. For the pandemic outbreak, you don’t know when it will peak and how long it will last.”

Despite the inherent risks and dangers, Santiago said he feels the same call of duty he did in crises past.

“I am not a doctor, police officer, or EMS worker, but I do try to help out customers,” he said. “For daily meals, Sabbaths, or the Passover seders, customers are depending on us to provide food for their tables.”

In the pre-coronavirus days, I once saw Santiago come around the counter to hug and console a widow even though he had a long line of customers to serve. A transplanted New Yorker, she and her husband were prior Fine & Schapiro customers and continued with Santiago at Ben’s. Since her husband had died a few years earlier, her weekly visits included an off-menu greeting, warm embrace and a how-are-you from Santiago.

“Santiago has a gift in the way he connects with people, and he is authentically kind and caring,” said Ronnie Dragoon, chief executive officer and founder of the Ben’s Restaurant Group.

Dragoon is only one of many fans. Indeed, Santiago has a huge, almost cult-like following. Pre-coronavirus, he was besieged throughout the day by customers seeking to speak just to him. If a spouse were ailing at home, Santiago would write a personalized get-well note on a restaurant guest check. Standing 6’2” with an athletic — if slightly aging — build, he towered over the counter, often coming around, Elizabeth Warren-like, to take selfies with his following.

Over the years, some of those customers have been really special. He served Joe DiMaggio chicken-in-the-pot in the backroom of 2nd Avenue Deli. He made a lifelong fan out of Brooke Shields and her mother, who took their deli business with him when he left 2nd Avenue for Fine and Schapiro. And when he left New York for Florida, he got an earful from comedian Robert Klein, who asked him who would help Klein’s mom with her chicken-in-the-pot requests.

Santiago says there’s no secret to his popularity, he just cares for his customers.

“I patiently listen to everyone’s personal situations,” he said. “Many customers are alone and have a pressing need to express their thoughts and feelings.”

Letter from Palm Beach: Santiago Lopez goes from the counter to the front lines