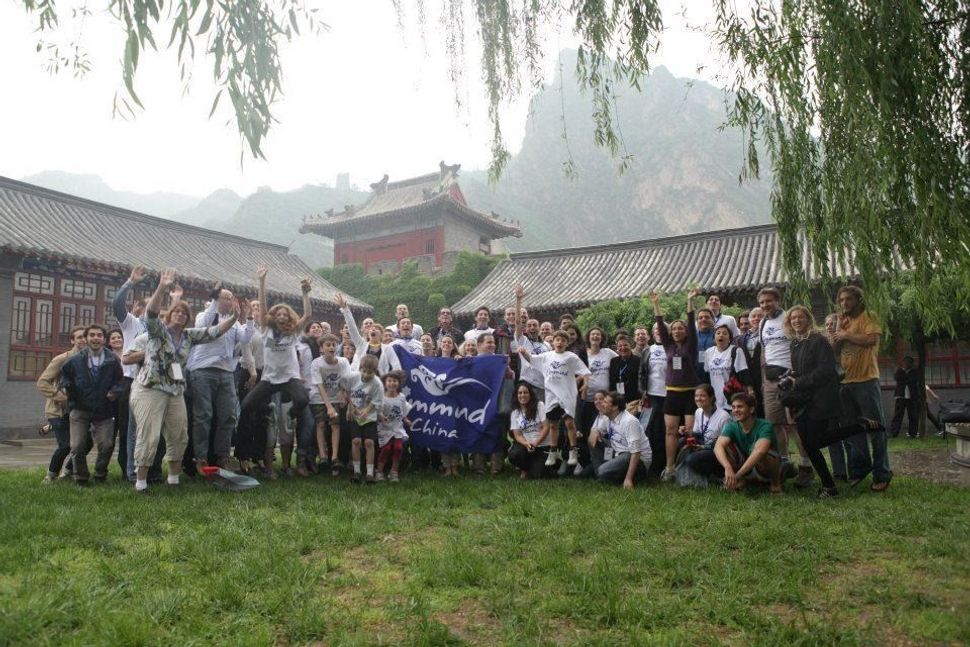 Case in point: for the first time, separate Jewish communities in China, Taiwan, Japan, Thailand, and Singapore are coming together to co-host digital events. One of them, the upcoming Asian Limmud conference to be held online May 3-4, is a joint initiative between Jewish communities in Beijing, Taipei, and Shanghai. digital event, co-hosted event by Kehilat Taipei, Beijing, and Shanghai.

If Jews in Asia have gotten anything out of coronavirus, it’s an understanding that there is a broader, thriving Jewish community throughout Asia. That is a silver lining in the otherwise devastating crisis. 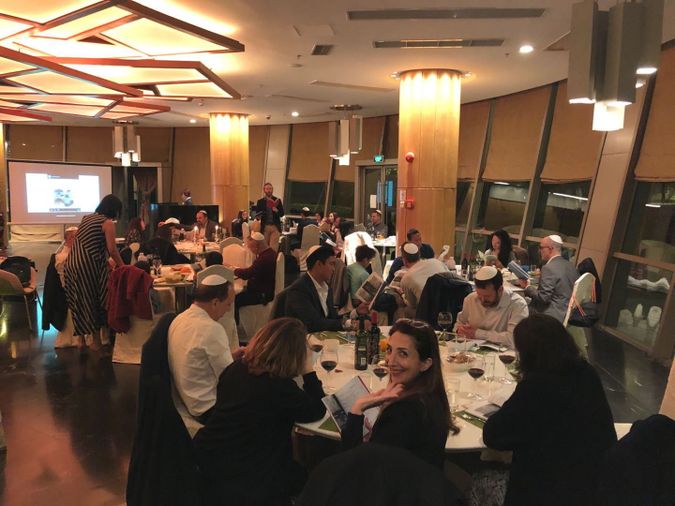 After a restriction on gatherings was lifted, members of the Jewish community in Shanghai celebrated Passover together.

Both practical challenges and a sense of isolation comes along with being a Jew in a country where less than 0.00001 percent of the population is Jewish. Kehilat Shanghai, in its eighth year, opened up a space for progressive Jewish life in Shanghai.

“We were started by a variety of families living in Shanghai who didn’t feel welcome, who wanted something inclusive of interfaith families, interracial families, and a more liberal definition of Judaism,” said Ullman. “We have a mix of Americans, Israelis, Europeans, South Africans, Australians, Brits, Brazilians. Some people have been in China for ten plus years. We have a lot of mixed marriages.”

However, Kehilat Shanghai and other Jewish communities throughout Asia have found both challenges and new opportunities accompanying the isolation that coronavirus has brought the region and the world. Virtual Shabbats, discussions, healing services, and havdalahs_; Zoom matzah-making competitions, webinars, WeChat message groups of 150-plus people; newsletters, YouTube videos, and newfound outreach and connection with hundreds of old and new members not just in Asia but around the world are just a few of the ways that Jewish life in Asia has responded to the pandemic.

“When there’s fear, people want to connect. People are isolated, so they want to connect,” said David Kunin, the rabbi at the Jewish Community of Japan in Tokyo (JCJ). “When we did our Passover seder, we had people from Korea, from the Philippines, from New York, all over Japan, Cambodia, Germany—we had old members connecting with us, others reaching out for the first time, wanting to connect with a Jewish community in Asia.”

The Jewish Community of Japan, a conservative synagogue and Jewish community in Tokyo, has rapidly expanded virtual offerings in this time of crisis. Large-scale events have been shut down in Japan since Prime Minister Abe Shinzo closed schools on February 27, so the Jewish Community of Japan began virtual Shabbat services. But besides online services for Kabbalat Shabbats, havdalahs, Purim, Pesach, and Yom Hashoah, the Jewish Community of Japan has greatly increased its email output, created YouTube videos from the rabbi, turned to virtual Hebrew school classes, and sent out weekly Torah thoughts. Kunin’s most recent email, “Rituals that Bring Us Together,” compares Japanese Shinto festivals with ancient Jewish pilgrimage festivals. Rabbi Yosef Kantor at the Chabad of Thailand’s Jewish Community of Thailand has been going live on Facebook every day to offer words of inspiration.

“Connection is really what people want at this time,” Kunin said. “The number of letters we’ve gotten back from people thanking us, sending us their thoughts, and keeping in touch is amazing. A lot of synagogues are limiting what they’re doing, but this is actually a time when people need prayer. They need to be able to say the Kaddish.”

Kunin said that he hopes to find continued ways to connect with the broader Asian Jewish community digitally. “Moving forward, I really see the importance for live social media feeds for our services.”

Leon Fenster, a freelance artist who has been involved with the Kehilat Jewish communities in both Beijing and Taipei, said that people all over the world connect with the Asian Jewish communities. “People in New York still meet up for Kehilat Beijing gatherings,” he said. “One of my projects is an illuminated haggadah, and while we were hoping to launch it at a big seder in Beijing, I was happy to be able to launch it online to connect with people around the world who still feel like they are a part of this community.” 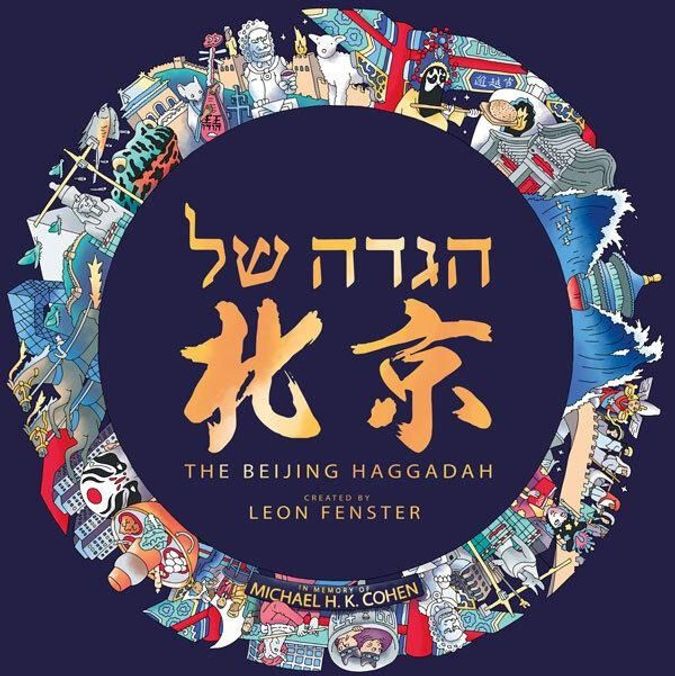 That’s not to say that the age of coronavirus has been short of challenges. With major holiday events—key sources of income—forced to go digital, Kehilat Shanghai’s fundraising has been challenged. “Passover is normally a big fundraising moment for us, but we’ve limited our ask, because everyone around the world is being financially impacted,” said Ullman.

Kunin said that the rise of bigotry against Asians around the world in the wake of coronavirus has become a key topic of discussion. “It’s certainly difficult being a minority, but it’s especially difficult for many of our children with one Japanese parent to feel Jewish,” he said. “When people go back to the US or for Jewish summer camps, people just don’t think it’s possible for there to be Asian Jews. We need to come together as a broader Asian community to help kids strengthen their identities and realize that there is a strong Jewish Asian identity.” 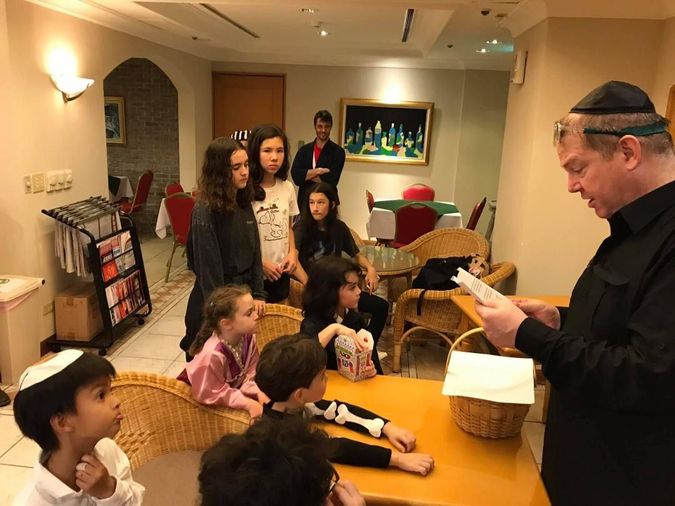 Prayer in a community member’s home.

These communities mean the world to people who are often severed from the Jewish communities they were born into by thousands of miles, and to families with no other way to impart Jewish values to their children.

“I was in Beijing for about six years, and I would not have stayed six years if it were not for the Jewish community,” said Fenster. “It was really important to have that home.”

“Eric Margolis is a writer and translator based in Nagoya. You can follow his work on Twitter