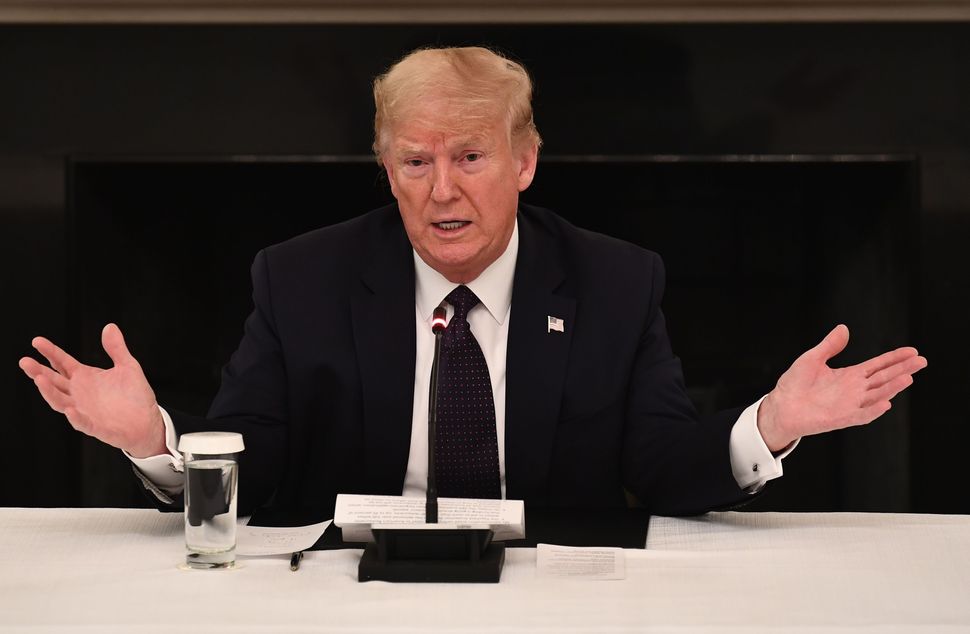 Trump said Monday he is taking hydroxychloroquine. Image by Getty

President Donald Trump said Monday that he is taking hydroxychloroquine, the controversial antimalarial drug whose use to combat COVID-19 has been touted heavily by a Hasidic doctor in upstate New York.

The doctor, Vladimir Zelenko, who has expressed support for Trump on social media, sent a letter to the White House in March about his initial results in using the drug to treat presumptive Covid cases on an outpatient basis. Speaking to reporters after a meeting with restaurant executives at the White House Monday, the president said that he had begun taking the drug after receiving a letter from a New York doctor who was treating his patients with it, though he did not name the doctor.

Trump said he is taking hydroxychloroquine and a zinc supplement, though not the antibiotic azithromycin. 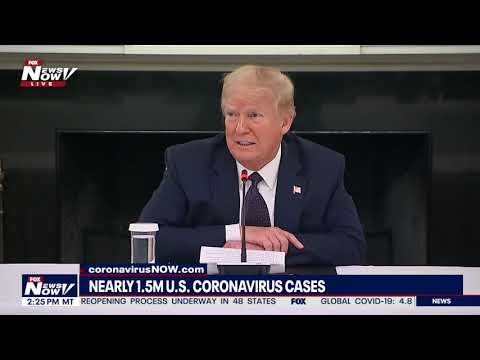 In a phone conversation immediately following Trump’s nationally televised comments, Zelenko declined to say whether he had previously known that Trump was taking the drug. He said he had never spoken directly with the president, nor been consulted by anyone in the White House in determining Trump’s treatment.

In March, Zelenko sent a letter with self-reported results from his primary care practice — outside the Hasidic enclave of Kiryas Joel, N.Y. — which showed no deaths and only a few hospitalizations out of hundreds of people treated with the hydroxychloroquine regimen. Mark Meadows, Trump’s chief of staff, then communicated with Zelenko about the results, which had not been peer-reviewed.

Zelenko said in the interview on Monday that over the past month he has sent text messages to Meadows about emerging research on hydroxychloroquine, and discussed hydroxychloroquine with Rudy Giuliani, Trump’s personal lawyer, and Sen. Ron Johnson, of Wisconsin. Asked whether he knew whether any of these people had suggested Trump take the drug, Zelenko declined to comment.

Researchers say hydroxychloroquine is, overall, a safe drug. It has been in use for decades as an antimalarial and as a treatment for rheumatoid arthritis, and side affects are rare. Doctors have been prescribing the drug in critical-care patients with COVID-19 since the beginning of the pandemic, and some health-care workers and their families have also been taking it prophylactically to stave off the virus.

Top public-health officials, however, have sounded caution about using the drug at scale to treat COVID-19, since there remains no evidence from clinically-controlled studies attesting to its efficacy or safety for that use. In April the Food and Drug Administration cautioned against the use of the drug for treating COVID-19 outside of a hospital setting or clinically controlled study, because the drug can cause abnormal heart rhythms, and noted that those risks are heightened when prescribed with azithromycin, which can have a similar side affect. There have also been concerns that over-prescription for untested treatment of COVID-19 could cause shortages of the drug for rheumatoid arthritis patients who rely on it.

In a tweet earlier this month, Dr. David Boulware, who is leading a clinically controlled trial of hydroxychloroquine at the University of Minnesota, said that his team is currently preparing its first round of results — and that the drug has been safe overall for outpatient and prophylactic use.

May 6 and we are to perform an interim analysis of 2 of our 3 #COVID clinical trials this afternoon. It is a double blind trial, so I have not seen any results by the two groups (#hydroxychloroquine vs. Placebo) as yet. I am aware of the pooled results. Safety has been good.

Zelenko is currently preparing to release what he said will be a peer-reviewed analysis of more than 1,000 of his patients to whom he prescribed his hydroxychloroquine regiment.

Trump said on Monday that he suggested to his doctor at the White House that he be given the drug, and was then prescribed it. He said he began taking the drug about one and a half weeks ago. In a statement released Monday evening, the White House physician, Dr. Sean P. Conley, said that after discussion with Trump the two “concluded the potential benefit from treatment outweighed the relative risks.”

Trump said he was not taking the drug because he had been exposed to someone with Covid-19, but, like some health-care workers, doing so prophylactically.

“I want the people of this nation to feel good,” Trump said. “I don’t want them to be sick. And there’s a very good chance that this has an impact.”

Zelenko said that he himself takes the drug, and that if Trump were his patient, he would have prescribed it to him, because of risk factors including the president’s age — 73 — and the high number of people he has to interact with.

“Trump is a human being like everyone else, and I treat everyone equally,” Zelenko said. “I would have definitely recommended that someone like President Trump take it prophylactically.”