What the old Jewish radical taught me about George Floyd 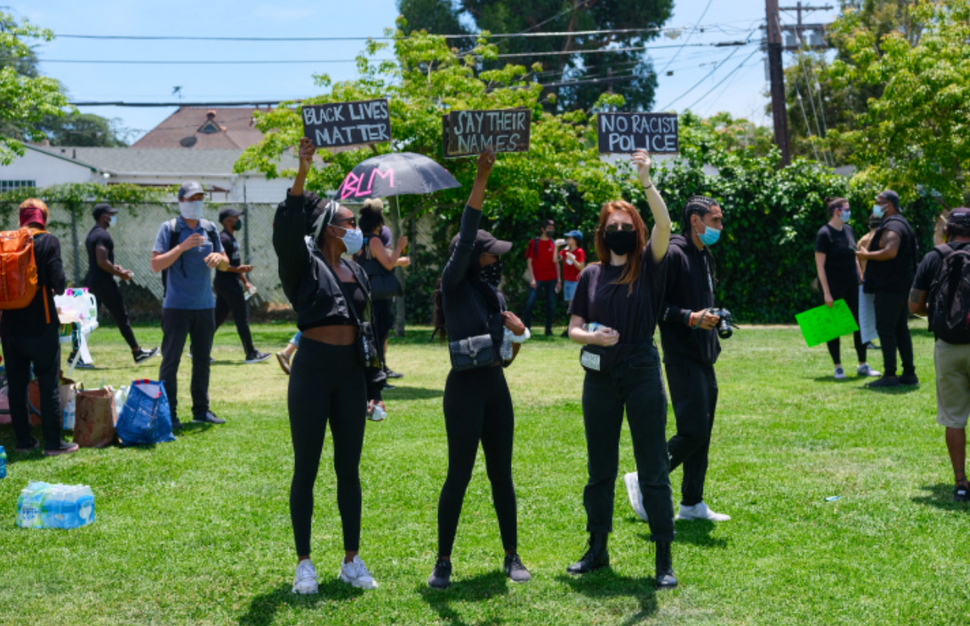 It was weird, frankly, waking up on Sunday to a still, beautiful morning.

The downtown L.A. streets that were inflamed by protests and riot police the night before were clamped shut by waves of uniformed National Guards. Cops and clean up crews made their way through the debris at Beverly Blvd. and Fairfax Ave., where more than 10,000 protesters had marched, and some looters had caused mayhem among the malls, synagogues, boutiques and mom-and-pop stores in the historic Jewish neighborhood.

The mayhem was sparked by the police mayhem in Minneapolis, where three police officers assisted as a third, Derek Chauvin, knelt on the neck of 46 year-old black man, George Floyd, who ended up dead.

It was the death, again, of an unarmed African–American at the hands of the police, and it unleashed another round of justifiable rage.

Demonstrators poured into L.A.’s Pan Pacific Park on Saturday for what started as a peaceful protest organized by Black Lives Matter. Oddly, the first Los Angeles Times article about the protest, where the crowd was mostly made up mostly of young blacks and Latinos, led with quotes from… Marsha Steinberg.

I remember Steinberg. She is the 76 year-old Jewish woman– not black, not Latino, not young – who for years has been a fixture at pro-Palestine rallies. I’ve seen her at so many rallies and protests over the years that I suppose I’d written her off as kind of a perpetual agitator, someone whose politics are radical to the point of fruitless, an eternal tilter at windmills. Seeing her show up in the lead paragraphs of a Black Lives Matter story, her words all over the media instantly, made me curious: Why hasn’t she given up?

So I called her.

Steinberg, who wears hearing aids, had a hard time understanding me at first.

“Is there a better phone?” I asked.

“Is there a better ear?” she said.

Steinberg told me she’s indeed been protesting her entire adult life. She was raised in Newton, Mass. He father did well in hardware – “He was petty bourgeois”– but her family life was dysfunctional. Her mother died when Steinberg was 15, and young Marsha soon moved away and followed in the radical footsteps of her two aunts, both members of the Communist Party.

At the Chicago protests over the second conspiracy trial of Jerry Rubin, Steinberg was arrested and sentenced to three months in prison. 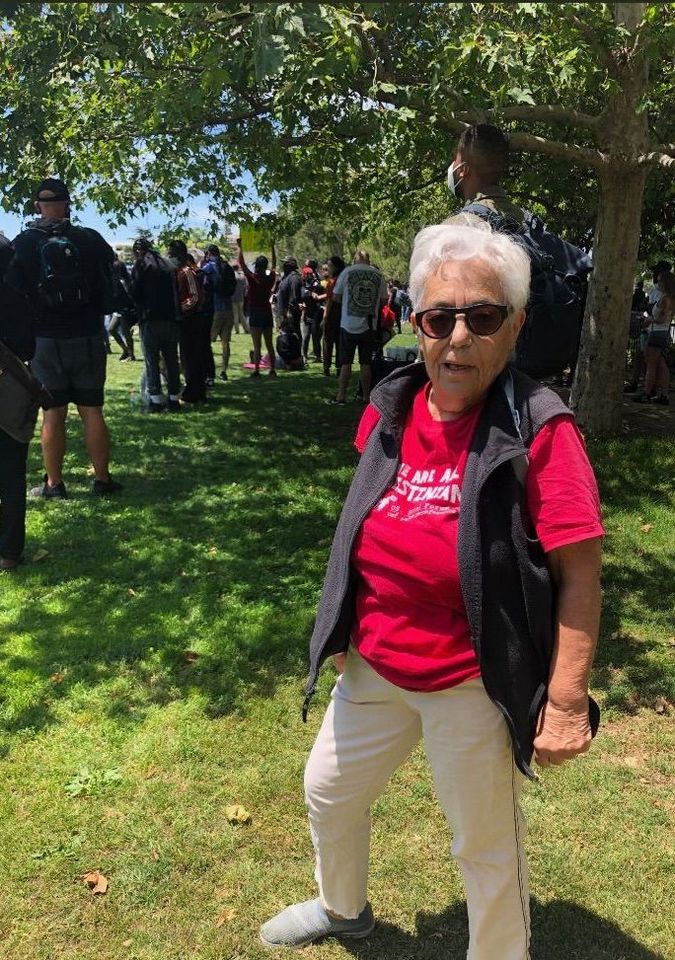 Marsha Steinberg at the May 30 Pan Pacific Park rally protestin the murder of George Floyd. Image by (Dakota Smith via Twitter)

“They only charged me because the police beat me up. That’s how they do it,” she said. “That was very educational. Even though I had a class and race privilege it was still Cook County jail. It was the real deal.”

After, she moved back to Boston, where she was one of the founders of City Life/Vida Urbana, a still-vibrant tenants’ rights group in the Roxbury neighborhood.

In 1979 Steinberg moved with her daughter to Los Angeles, where she worked first as a respiratory therapist, then as a public union representative.

And she attended rallies.

On Saturday, Steinberg said she simply walked a few blocks to the protest at Pan Pacific Park. She wasn’t sure how worried to be about exposure to the coronavirus after weeks of quarantine.

“I was tired of being home” she said.

The protesters wore face masks, Steinberg said, including some from antifa, the anti-fascist group, who she said were the ones who instigated the looting.

“It’s the white people,” she said, “its antifa. I don’t support burning or looting locally owned stores. I don’t think it’s a strategy. Do I think it’s helpful, no?”

She suspected the looters could be provocateurs.

“I remember this from Rodney King,” she said, speaking of the last time L.A. erupted in city-wide protests, which Steinberg also took part in.

But does protesting ever change anything, I asked Steinberg. After Rodney King, after the outrage from numerous police killings of unarmed black men and women, does Steinberg think change will ever come?

“My stock answer is,Who predicted the fall of the Soviet Union?” she said. “The answer is no one. Certain institutions are no longer viable. I don’t think any of the norms hold anymore.”

After decades of protest, she points to the anti-Vietnam War movement and City Life/Vida Urbana as examples of where activism mattered.

“Everything about City Life is a victory to this day,” she said.

City Life came about through sustained organizing, education and community building. It may be one of the best examples of what the Black Lives Matter movement means when it calls for a, “transformation that ensures our people are not left behind.”

After this weekend of turmoil, it’s too easy to be cynical and pessimistic: That pundits and politicians will obsess over the looters in the streets when looters in government and finance continue to scam taxpayers and consumers. That police departments will go back to business-as-usual, as if violence and racism is just a part of policing everywhere (hint: it’s not). That nothing will ever change.

Then you talk to that old woman you used to write off as just another life-long placard-waver, and you think: nope, don’t give up.

What the old Jewish radical taught me about George Floyd