How New York’s Haredim are responding to George Floyd protests 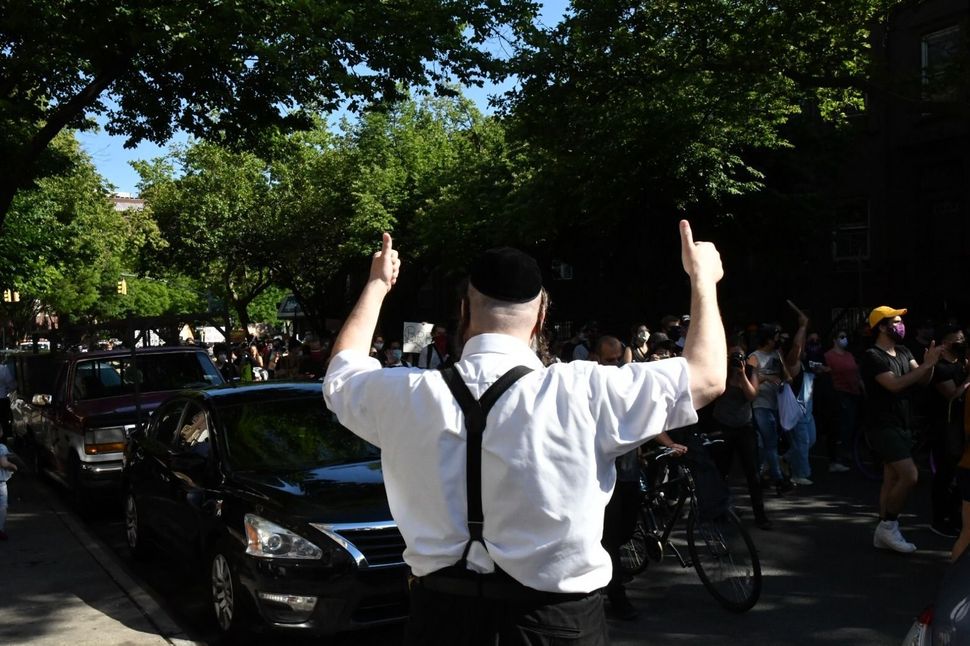 A Haredi man cheers the protesters in Williamsburg on June 3, 2020. Image by John Kunza/The Forward

A crowd of police in riot gear marched down Crown Heights’ Eastern Parkway one day this week to applause and salutes from some of the neighborhood’s Haredi residents.

Another day, amid another Black Lives Matter protest, a Jewish man with side curls offered the throng in Williamsburg a double thumbs-up. Over on Williamsburgh’s Bedford and Penn Streets, another Haredi Jew handed out water bottles to protesters and police officers alike. 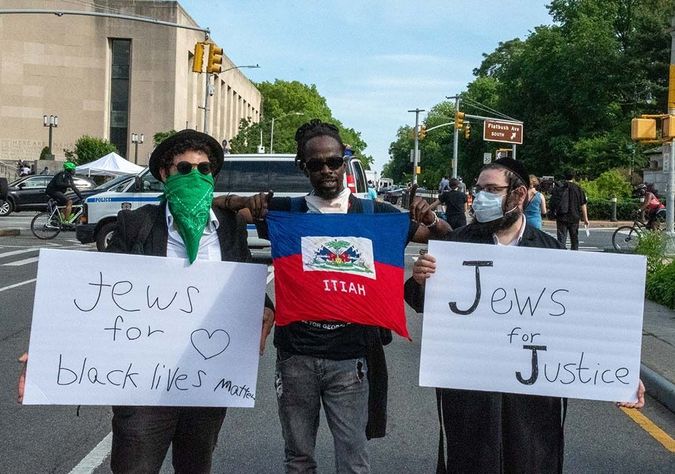 Jews for justice protesters take part in a demonstration at Grand Army Plaza in Brooklyn, June 4, 2020. Image by John Kunza

Miles and hours apart, these scenes reflect the range of Orthodox Jewish reactions to the roiling demonstrations against the police killing of the unarmed black man George Floyd. Opinions differ by neighborhood and of course by individual — some Haredi New Yorkers are applauding the demonstrators, but many feel like they have gone too far. As in all communities, some have conflated the masses of peaceful protesters with the sporadic looting and vandalism, while others are careful to keep the distinction.

But in the ultra-Orthodox enclaves of Brooklyn, there are a few distinct factors stemming from recent and longer-range history that underpin the reactions. The community is frustrated with the mayor’s lackluster response to anti-Semitism last year and a perceived overreaction to social-distancing violations during the coronavirus pandemic. Their appetite for conservative media and politics aligns many of them with critics of the protesters. And the pandemic disrupted the finely-tuned social and religious rhythm to which they are anxious to return. 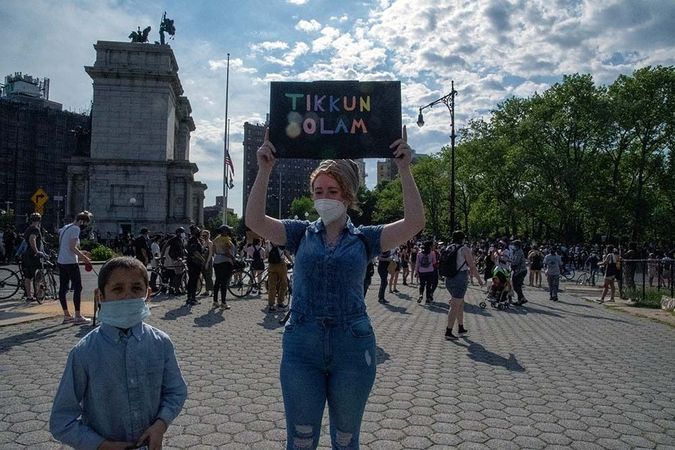 A demonstrator holds up a tikkun olam sign at a demonstration at Brooklyn’s Grand Army Plaza during a Black Lives Matter rally June 4, 2020. Image by John Kunza

Timing is also, of course, critical. The protests come after weeks in which Orthodox residents have been complaining of unfair treatment and “over-policing” for social-distancing violations — including one hot moment when Mayor Bill DeBlasio went personally to Williamsburg to help break up a funeral for a beloved rabbi. Outrage erupted online when Haredi women and their children were ordered to leave a city park on Monday, while thousands of protesters have gathered with tacit support from the mayor.

“You’re allowing people to gather and protest and walk the same city blocks that four weeks ago had the funeral,” said Chaskel Bennett, a leader in the Flatbush Orthodox community. “People don’t like hypocrisy.”

Some leaders also expressed concern about the health consequences involved with the mass protests.

Yaacov Behrman, a representative of Chabad and a member of a Crown Heights community board, got married in a backyard at the start of the shutdown with only a few guests, hasn’t been to synagogue since March 12, and has been “consistently outspoken about the mass funerals.” Now he is worried the demonstrations will cause a spike in coronavirus infections just as transmission was subsiding in New York.

“I am horrified by what happened to George Floyd,” he said. “I don’t want to minimize that. Black Americans deserve to feel safe and be safe. But we have to find another way to protest.

“We all made sacrifices, and yes, I agree, it’s outrageous, we have to scream,” he added. “But how is it okay to stand in large groups without social distancing, when it can put this community in harm’s way?” 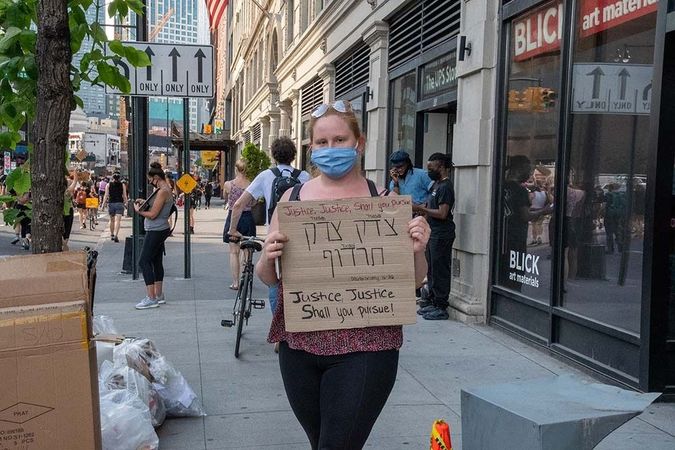 A demonstrator holds up a sign during a Black Lives Matter march through Downtown Brooklyn, June 4, 2020. Image by John Kunza

Mayor de Blasio figures prominently in the Orthodox reaction, especially because of his controversial tweet after the April funeral in Williamsburg. The tweet, which lambasted “the Jewish community” for failing to socially distance, drew ire from many corners of the Jewish world. It generated extra frustration from the Orthodox, who felt singled out by enforcement despite having officially supported de Blasio in exchange for cultural victories like his backing of the city’s religious yeshivas amidst a probe into the quality of their secular instruction.

(Police data shows that black and brown people actually have been most frequently targeted by arrests and summonses, but 311 calls complaining about social distancing have been high in Orthodox neighborhoods.)

And the presence of police cruisers patrolling the streets of Borough Park to look for social-distancing violations has special salience for some Jews who felt like the city had not protected them from harm in a time of need during a spike in anti-Semitic violence late last year.

“Jews were getting beaten up mercilessly in Borough Park, in Williamsburg and in Crown Heights, and we were screaming and shouting and begging for more police,” Bennett said.

Although many Haredi Jews in New York feel burned by the mayor and concerned about protests growing violent, in some areas, such as the Queens neighborhood of Far Rockaway, Orthodox Jews joined the protest. 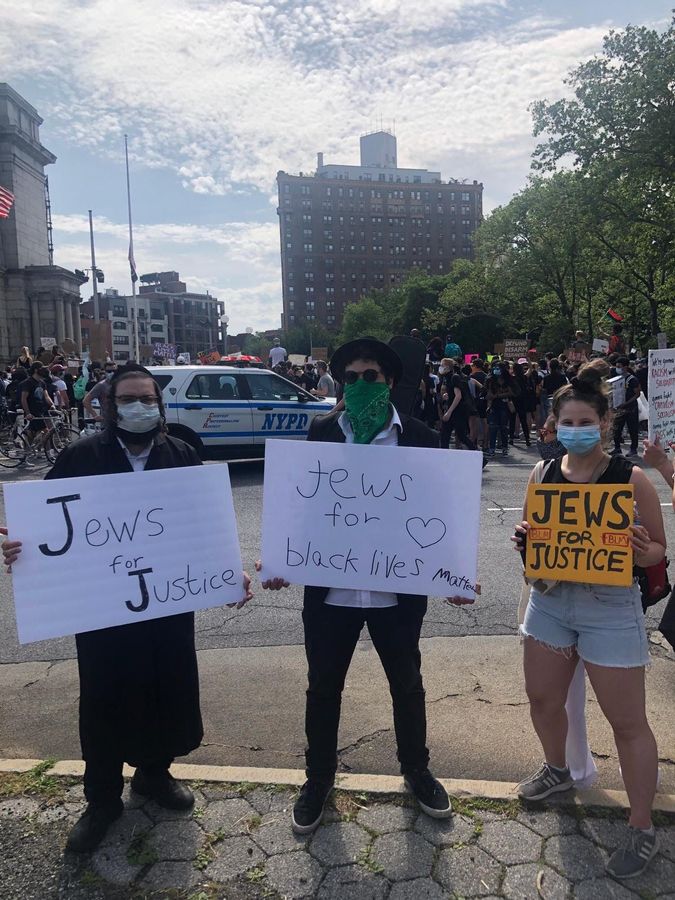 Richard Altabe, a principal at a local yeshiva, was photographed at the front of a march alongside black community leaders. In Nyack, N.Y., in Rockland County, Mimi Hecht documented her participation in a march on her modest fashion brand’s Instagram page.

“I am a Jewish woman that wants to confront my own racism,” Hecht wrote, alongside a picture of herself in the crowd, wearing a facemask and a headscarf. “I’m trying to show up. Grow up. Stand out. Stand up. Get it wrong. Make it right. Repeat.”

Adina Miles, a social media activist and Orthodox woman with over 46,000 followers on Instagram, faced hostile pushback from followers for posting a photo of herself at a demonstration.

”Poor baby has way too much time on her hands and is crying for attention,” said one user

In Crown Heights, there is also the lingering legacy of the 1991 riots, sparked by an incident in which a car in the motorcade of Rabbi Menachem Mendel Schneerson, the leader of the Chabad movement, knocked a stone pillar over onto two Guyanese children, one of whom died. That night, a 29-year-old Jewish student was killed by a group of black men.

The anti-Semitic violence in late 2019, where several of the attackers caught on video or arrested were African American, as well as the civil unrest now have echoes of the racial tension from that period, according to Samuel Heilman, a professor at Queens College who studies contemporary Orthodox movements.

“In the Haredi community, there is a general racism and general feeling that is, of course, a part of the legacy of living in the inner city,” he said.

“In many ways, the Crown Heights riot was the fulfillment of their worst nightmare.”

As headquarters for the Chabad-Lubavitch movement, which is less insular than other Haredi sects, Crown Heights may feel less animosity toward the police, Heilman said, than Williamsburg and Borough Park. “They are doing outreach work,” he said. “They need to have a good relationship with the cops.”

And indeed, some Haredi leaders are criticizing people in the community for evoking 1991 as New Yorkers once again hear sirens and chanting into the night.

“You can’t compare Crown Heights riots to now,” said Yaacov Behrman, a Chabad spokesperson. “Then, rioters were attacking Jews in the streets, Jewish institutions — they were attacking a specific community. And the government was saying, let them vent.”

Now, he said, the violence is not targeting Jewish institutions. But the memories of past years linger. “There is a lot of trauma, there is a lot of fear here,” he said. “We know that if a riot gets out of hand, we know what can happen.”

In some Haredi circles, chat apps are swirling with racist memes and misinformation. One recent message asked in all caps, “WHAT IF ALL THE BLACKS SUDDENLY LEFT AMERICA” and offered unsubstantiated statistics about the impact on the nation’s average I.Q. and rates of sexually transmitted diseases.

“There is a lack of awareness, a lack of education about racial issues here,” said Elad Nehorai, a Crown Heights resident and a community organizer. “There’s this general notion like, ‘We came here to America, we were able to succeed and not be violent. Why can’t they?’”

Some community critics say it is impossible to divorce their neighbors’ attitudes towards racial justice from their political leanings and support for President Donald Trump, the choice of the majority of Haredi voters in 2016. Many quote President Trump’s designation of protesters as “thugs.”

Shulim Leifer, a Hasidic healthcare executive living in Brooklyn, pointed to a “lack of quality education and corrupt leaders who benefit personally from their relationships to power” that leads fellow community members to support “an authoritarian racist like Donald Trump.”

For some Orthodox Jews, past violence is serving more as a motivator to fix the problem, and less as a traumatic experience generating fear.

Devorah Halberstam’s son Ari was killed in 1994 by a terrorist attack on the Brooklyn Bridge. She said that while the looting and destruction is disturbing, the demonstrators need to be heard.

“One thing that I am learning from this myself is that we need to listen,” she said. “If people obviously are in pain — I’m talking about the people who are crying out legitimately and protesting— we do have to start listening to people.

“I think I have a unique perspective on it because my son was murdered,” she added. “Mothers are suffering. That’s real.”

How New York’s Haredim are responding to George Floyd protests