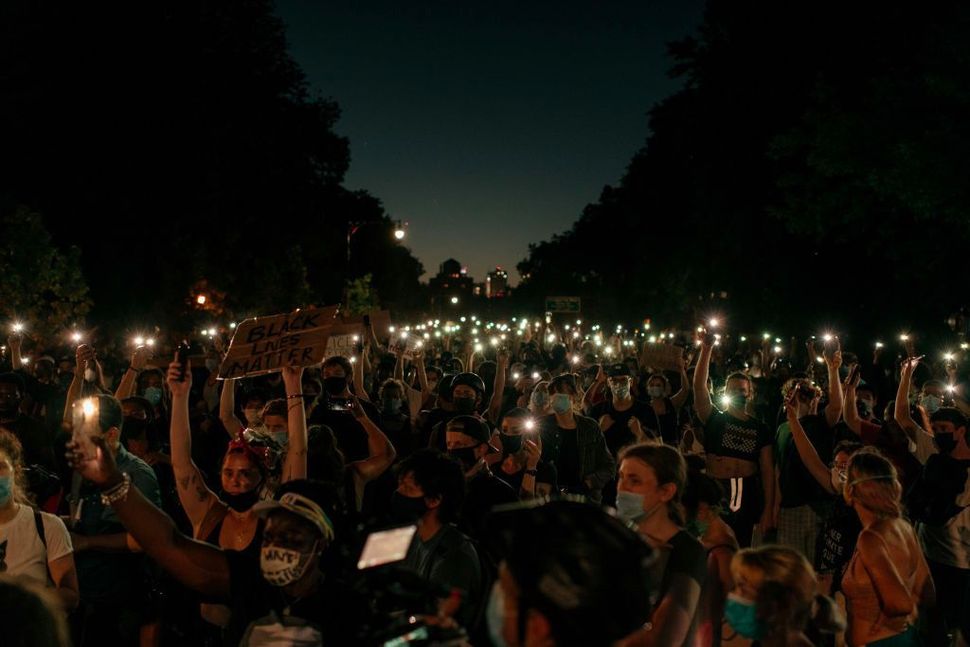 A protest in Brooklyn on June 6. Image by Getty

A city council member’s chief of staff recalled a walk home from school that became an involuntary trip to the police station, on suspicion of truancy.

A congressman described working with the Congressional Black Congress on budget proposals — only for white colleagues to reject them every year.

New York’s attorney general comforted her teenage nephew after he was stopped and frisked on the way to her home.

Stories like these — told by Samuel Pierre, Congressman Gregory Meeks, and New York Attorney General Letitia James — formed the core of a listening session hosted by the Jewish Community Relations Council on Sunday afternoon. For almost two hours, black leaders shared how racism had impacted their lives — and urged a largely Jewish audience to take concrete action against it.

The event was intended to allow audience members not to “talk and ask questions, but to actively listen,” said Rabbi Michael Miller, the organization’s executive vice president and CEO.

However, speakers also used the moment to argue that listening to stories and empathizing with the tellers is not enough.

“How many stories do you really need to hear?” asked Tamara Fish, an activist for Jews of color and the former president of the Jewish Multiracial Network. “Yes, they may inspire, but they can also become cocktail fodder. Listening is easy and easy is not what the situation calls for.”

Fish argued that it’s easy to hear stories or absorb evidence of structural racism — like the fact that New York City’s schools are among the most segregated of any metropolitan area in America — without doing anything about it.

She urged audience members to move beyond listening by learning about American history. Much of it, she said, stands “in clear defiance of [the values] we uphold as Jews,” especially the importance that Jewish tradition places on access to justice before the law.

Other speakers advocated for specific policy changes. Pierre said that a possible repeal of New York’s 50-A law, a state law that makes police disciplinary histories inaccessible to the public, could make a significant difference for state residents.

Jennifer Jones Austin, CEO of the Federation of Protestant Welfare Associations, said that those who stand with the black community on issues of police violence must stand with them when it comes to discussion of other structural issues, such as disparities in education or access to healthcare.

James voiced support for protesters and urged the audience not to let “opportunistic people hijacking the protests for their own purposes” compromise their overall message.

Like almost every gathering since the onset of the coronavirus pandemic, the listening session had a slightly informal tone. Speakers appeared in their kitchens and home offices. Someone in the room with Congressman Meeks received a phone call while he was describing a train trip through the segregated South. The invisible audience was represented only by a number in the corner of the screen, ticking steadily upward as the session progressed.

But speakers addressed the audience with the urgency of those meeting and marching in person. “My message is clear,” said James.”Let those kids march, until the walls of intractable racism come crashing down.”