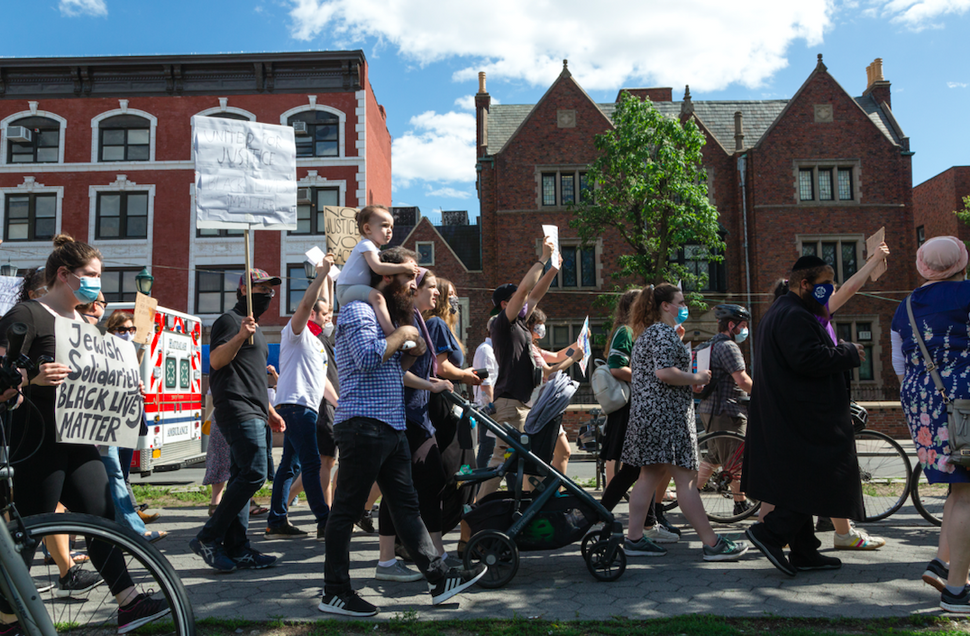 Demonstrators at a protest organized by Hasidic Jews in Crown Heights. Image by Mo Gelber

For Miriam Levy-Haim, the most exciting part of the march was watching the crowd grow.

She’d expected to gather between 30 and 50 members of her Crown Heights Chabad community to march against police violence on a Sunday afternoon in early June. In fact, hundreds of parents, teenagers and young children showed up bearing signs, including ones that read “Human decency should be a frum value” and “Orthodox Jews for Black Lives Matter.”

“We thought it was important to make a strong statement, visibly, as a Jewish community,” said Levy-Haim, 32, one of the march’s organizers. She just didn’t know how visible it would be.

Taking place in a neighborhood historically riven by racial tensions, the march gathered hundreds of members of a community typically wary of political activism. Organizers said social networks formed after the 2016 political election helped them galvanize a swath of New Yorkers unlikely to engage in the protests that erupted after George Floyd’s death.

Now, as the march gains attention from major media outlets, organizers are coalescing into an activist group using social media to spur change in Crown Heights.

“There are a lot of Chabad people who read about things in the news and say: ‘That’s not something that people like me care about,’” said Devorah Backman, 30, another organizer. “I’m interested in showing them, yes, people like you do care about this, they are talking about this.”

The 2016 election saw Brooklyn’s Orthodox Jewish population voting overwhelmingly for Donald Trump, and Levy-Haim and Backman were two of several disenchanted Chabadniks who formed a Facebook group, “After the Ugly Cry,” as a space for progressive peers, mostly young parents, to connect and commiserate. In the years since, group members shared memes, discussed the news of the day, and occasionally met up in person to attend rallies.

So on May 30, when Levy-Haim checked her phone after the two-day holiday of Shavuot and learned about the protests gripping the nation, she turned to friends she’d met through the group to process the news. A few days later, on a Whatsapp chat in the wee hours of the morning, an informal group of organizers settled on a date for a march of their own. By the time they powered down their phones for Shabbat, they’d put out the word through social media and lined up local politicians and activists to speak at the event. On a Saturday night Zoom call, just hours before the march was scheduled to begin, they ironed out the final details.

“We had no expectations because we put it together in a couple days,” Levy-Haim said. But their approach worked. While she initially hoped to gather 50 people at most, she estimated that around 300 came, many first-time protesters. 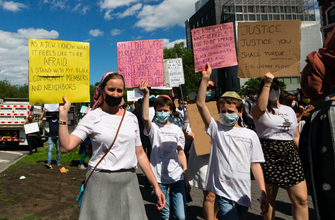 One marcher carried a sign that said, “As a Jew I know what it feels like to be afraid.” Image by Mo Gelber

In the weeks following, the march also gained national media attention unusual for goings-on within Orthodox circles. The Washington Post covered it, and on Twitter journalist Dan Rather cited it as evidence of a changing racial climate in Crown Heights.

More meaningful, for Levy-Haim, is feedback closer to home. Recently, she said, a high school classmate she’d always considered “apolitical” stopped her in the street to express support for the march. “She said, ‘Some people think if your tuchus is covered you don’t have to do anything, but a Yid doesn’t think that,” Levy-Haim said.

To her, that success indicates that a significant subset of the Chabad community is ready to engage with the current moment. Capitalizing on that energy, a core group of about 20 organizers are brainstorming ways to get involved with preexisting activism in Crown Heights. Right now, that means meeting with more established advocacy groups to learn how they can be useful.

“We live on the same streets and we have the same issues, whether it’s maternal health or making sure our parks are safe for children to play,” Levy-Haim said. “There are people who have been doing this for decades, so we don’t need to reinvent the wheel. We need to figure out how we as a group can best contribute.”

While organizers haven’t created a formal group — most planning takes place via Whatsapp — they have ventured onto Instagram, where conversations among progressive Orthodox Jews are already thriving, with a nascent online presence that seeks to make anti-racist work approachable to members of the Chabad community. Instructions on voting and calls to support local anti-gentrification initiatives like Equality for Flatbush mingle with photos of young fathers in black hats attending Juneteenth marches. 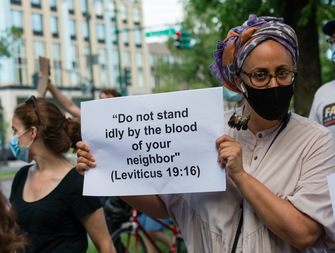 An attendee at the Crown Heights march displays her sign. Image by Mo Gelber

In marshalling their community, the march’s organizers were contravening the deeply ingrained social norms and political ideology that made a demonstration comprised of Hasidic Jews so unlikely in the first place.

Crown Heights, where the march took place, is a historically Caribbean and African-American neighborhood as well as the home of the Chabad-Lubavitch movement. In 1991, tensions between these communities came to a head when the motorcade of Rebbe Menachem Mendel Schneerson, the movement’s founder, accidentally struck two children of Guyanese immigrants, killing one. A three-day period of unrest followed, leaving two people dead.

In 2019, an epidemic of anti-Semitic harrassment rocked Brooklyn neighborhoods like Crown Heights, making visibly Jewish residents afraid to walk in their streets.

Nor has the Chabad community always been welcoming of Jews of color within its own ranks. Maayan Zik, who helped organize the march and acted as its emcee, is a black woman who converted to Orthodox Judaism. The first time she tried to attend a service at the Chabad movement’s headquarters in Crown Heights, she said, she was chased out by two white women who did not believe she was Jewish and threatened to call the police. Besides explicit hostility, Zik often contends with a lack of basic understanding. During her first pregnancy, acquaintances often asked if her bi-racial baby would be “white or black.”

“I live it every single day, to the point where it’s a blur,” she said of racism within the community. 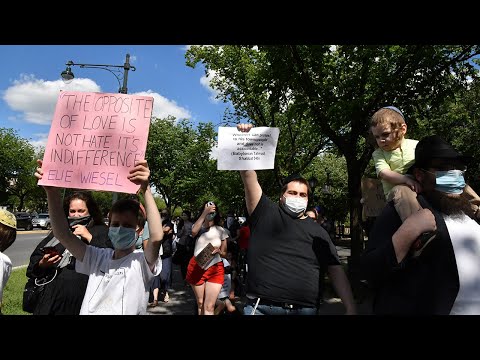 Today, it can feel isolating to hold progressive views within the largely conservative Chabad world, said Laura Melnicoff, another organizer. And even among those interested social justice causes, Levy-Haim added, “there’s no real culture of individual civic engagement.” Many feel it’s wisest to “keep your nose down, mind your own business, let the community leaders do their thing,” she said.

Organizers used their knowledge of the Chabad ecosystem to appeal to that second group. While spearheading outreach, Backman chose not to advertise on community news forums where conservative voices hold sway, fearing that aggressive pushback would intimidate prospective attendees. Instead, she circulated flyers on smaller Whatsapp chats and put word out through Orthodox Instagram influencers already known for their progressive viewpoints. In posts about the event on forums for Chabad mothers, organizers emphasized that the march would be family-friendly and the language “clean.”

While the march may have been a novel event, Melnicoff said that for her, activism is less a departure from communal norms than an affirmation of the Chabad movement’s founding principles. In fact, she said, the name of the group’s new Instagram account, “ker a velt,” draws on a Yiddish phrase meaning “turn the world over” from one Rabbi Schneerson’s speeches, which she described as a “rallying cry” to pursue a world of peace and justice.

“All these values of civil rights and equal rights, I see them confirmed in Chabad philosophy,” Melnicoff said.