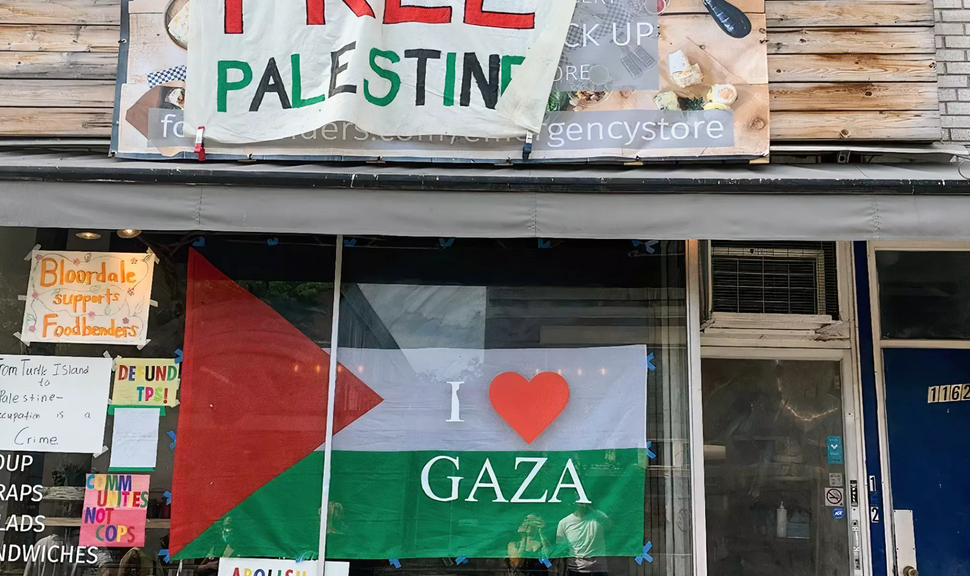 The front of Foodbenders in Toronto

What a difference a week has made to Kimberly Hawkins—the owner of Foodbenders catering company in downtown Toronto.

In just a week Hawkins’ take-out and catering business of seven years has gone from being renowned for its fresh, healthy options to infamous for her unhealthy hateful obsession with the Jewish state.

A little more than a week ago, on Friday July 3, I paid a visit to her store. This was just after word started to get out in the Toronto Jewish community about Hawkins’ anti-Semitic signs and Instagram posts.

Her anti-Zionist ravings ramped up in mid-June after she’d caught the public’s attention with F—- the police and Defund the Police signage outside her store.

Since she had posted on Instagram #ZionistsnotWelcome in her store, I pulled a keto salad out of her refrigerator and took it up to the cash register to see if she’d sell it to me.

Before I paid her, I told her I was a Zionist, a Jew and a Toronto journalist – in case she didn’t want to take my money.

She hesitated for a moment before taking my $13. I subsequently asked her if she wanted to comment on the controversy swirling around her about her series of posts, in which she called Zionists “greedy and entitled” and “Nazis.”

She’d also posted that Zionists “control the media,” and that Israel is a “terrorist state that kills little babies” – among many other anti-Semitic tropes dressed in the guise of being anti-Zionist.

She refused comment except to say she has a problem only with Zionists but loves Jews. She also told me all she was doing was standing up for Palestine and for that she was being harassed and was receiving death threats.

When I returned to the store a few minutes later to give her another chance to comment, I was ordered to leave by two of her supporters while they unleashed a torrent of f-words.

One of them called me a “hateful f—-” and told me I needed to leave the sidewalk outside her “private business” as well as the neighborhood. 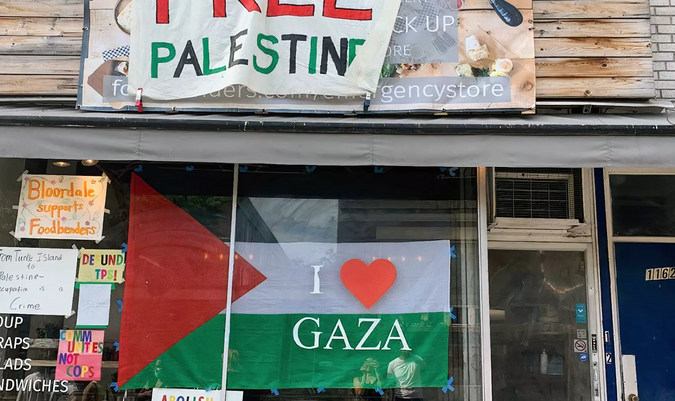 The front of Foodbenders in Toronto

The pressure started mounting that weekend when an unknown woman was seen spraying her front window with the Star of David, and the Jewish Defense League (JDL) held a peaceful picket outside the store Sunday evening. Hawkins declined to file charges against the woman.

By Monday, all of Toronto’s major Jewish advocacy groups and many members of the Jewish community had galvanized like never before. Ontario’s Premier Doug Ford tweeted that the language used by Hawkins was “disgusting” and should be condemned.

That morning I woke up to ugly comments on my Instagram page by several of her followers. One posted a comment under the lovely picture of my first post-COVID visit after four months with my 90-year-old dad saying, “Is that a rat holding his hand?”

That same day Hawkins, a single mother who is in her mid-thirties, received letters from both the Ritualfood delivery app and Uber Eats indicating they were severing their ties with Foodbenders.

On Tuesday, a DoorDash spokesman told me they too have decided to also remove Foodbenders from its platform for failing to follow its community guidelines.

“We do not tolerate any form of malicious, discriminatory or hateful behavior and any violation of this policy is grounds for deactivation,” the spokesman said.

At least two of the stores and cafes to which Foodbenders supplies products followed close behind, breaking their ties with Hawkins’ company.

By Wednesday, the Square payment system had also deplatformed her.

But Hawkins remained unrepentant, advising her increasing number of Instagram followers—a situation about which she bragged – that they should boycott Uber, which “supports the illegal occupation by an apartheid state” and that she wasn’t prepared to stop until Palestine was free. She appeared to enjoy fomenting hate on social media.

On Tuesday Hawkins alleged in an e-mail to me that I’d caused her “substantial suffering” and that my visit to her store was “totally out of line.”

She continued to insist she did not equate the state of Israel or Zionism to Judaism and does not hate Jewish people in any way. She added that she was “sorry” if people interpreted what she said as “hate” because that was not what she intended.

It was the sorriest of apologies given the tempest of her own making.

As the week wore on and pressure mounted, Hawkins posted that the “elitists” had incredible power when it came to the cancel culture – referring to the fact that the Zionists were allegedly in control of the decision by the delivery apps to break ties with her.

On Thursday her supporters tried to organize a protest outside the store to support her. But no one turned up.

Attempts by her supporters to launch GoFundMe pages were deactivated too.

That day, the first of what could end up being a variety of legal claims was filed against her. It was a discrimination claim to the Ontario Human Rights Tribunal by 86-year-old Toronto-area resident Elena Aschkenazi.

Facilitated by the Tel-Aviv based International Legal Forum, it was the first of its kind to use the International Holocaust Remembrance Alliance’s working definition of anti-Semitism. The complaint centered on the claim that attacking Zionists is a “thinly veiled euphemism for anti-Semitic hatred.”

Hawkins was also served Friday with a $750,000 defamation lawsuit on behalf of Toronto designer Shai De Luca, who shares Canadian and Israel citizenship. In his suit, De Luca claims Hawkins defamed him when she posted that he was an “IDF soldier (aka terrorist)” who was gathering his “whining Zionist friends” to attack Palestinians and Foodbenders.

Deplatformed and served up a dose of the very cancel culture which she embraces, Hawkins would never concede publicly that she has brought her troubles on herself.

If she is indeed forced to close her doors – and that remains to be seen – it will always be those “greedy, entitled” inhumane Zionists who killed her business—just like she claims they do to Palestinian children.

Sue-Ann Levy is a columnist for the Toronto Sun.