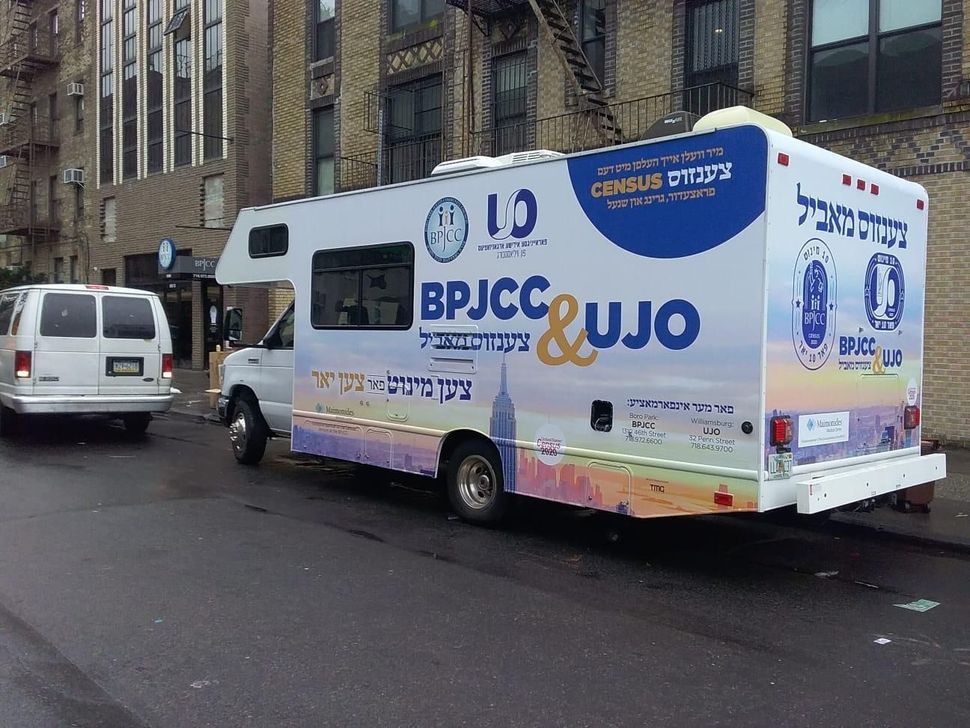 One Haredi man in Borough Park heard a rumor that the census will be used to round up Jews if there’s another world war.

A Yiddish web forum participant said Jews who fill out the census will cause plagues like swine flu and coronavirus.

Another pointed out that the paper census form only has spaces for ten people per household, which is not enough for his large family.

These are some of the reasons why Haredim, or Ultra-Orthodox Jews, shy away from filling out the U.S. census. These obstacles are especially salient in Borough Park, the religious south Brooklyn neighborhood. In the last census, more than a third of the Borough Park’s s residents reported speaking Yiddish at home. Some synagogues in the neighborhood are open 24 hours a day.

Also in the last census, taken in 2010, Borough Park had the lowest census response rate in the city — and among the lowest in the nation, said Boro Park Jewish Community Council CEO Avi Greenstein. Only 49% of households participated, compared to 61.9% of the city at large and 62.1% nationally, according to census data.

“It has something to do with our not-so-distant past being persecuted by government in Europe leading up to the Holocaust, that adds an inherent mistrust to government in general,” Greenstein said. “That’s, I think, one of the bigger reasons behind peoples’ hesitations to do a census.”

At stake are billions of dollars in federal funding for health clinics, schools, roads and fire departments and the number of seats in congress for each state. This chance only comes around once every ten years, like a comet. Since January, leaders in the Borough Park community have been working to make sure that each and every resident of the neighborhood was counted by July 31, the date originally set as the close of the census.

(The Forward has run two ad campaigns since April publicizing the census, and received about $15,000.)

Trying to learn Yiddish but getting stiff trying to study at your desk? Stretch it out with yoga in Yiddish with Reyna. Watch here.

Greenstein’s organization got a grant from the city for $75,000 to do census outreach starting in January, part of a $19 million allocation from the City Council to local organizations around the city.

Normally, that work involves in-person interactions — for example, the Boro Park Jewish Community Council planned on offering the census to people who entered their building, and holding events to draw people to complete the form. The Jewish Community Council leased a “Censusmobile,” a truck that played a Yiddish jingle about the census and parked around the neighborhood, equipped with tablets to help residents complete the necessary paperwork. Greenstein hired two full-time staff members to create partnerships and coordinate events. 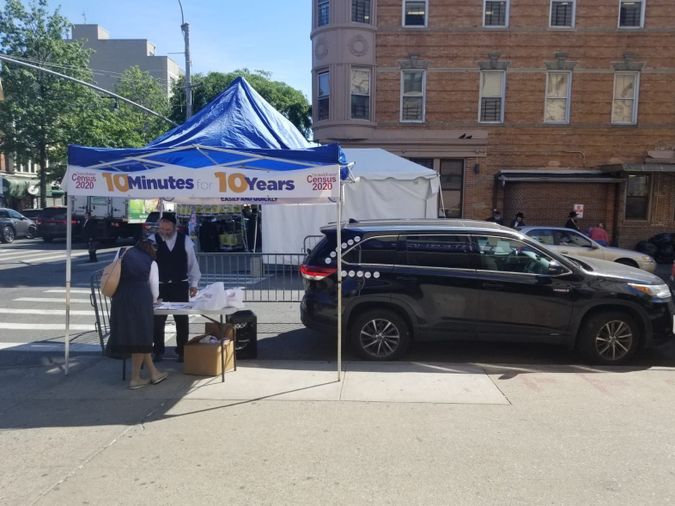 But the coronavirus waylaid the census plans and timelines.

Now, the deadline has been extended to October 31, but government grants given to groups like the Boro Park Jewish Community Council are running out. The council had gone through its funds by June. Greenstein sees outreach during the High Holidays this fall as the last major push, but the council will have to pay for that outreach itself. They are fundraising, and Greenstein said staff will “do those efforts regardless.”

Yet so far, despite the council’s efforts, Borough Park continues to fill out the census at lower rates than the city as a whole, with some census tracts in the neighborhood only reporting 32% participation. The city’s response rate is 53.5%.

Crown Heights and Williamsburg also have sizable Haredi populations, but they are more racially and ethnically diverse than Borough Park, and in the aggregate, participate more in the census: Williamsburg’s response rate was about 58% and Crown Heights’ was about 52%. But Greenstein and others said that census participation challenges are common across Haredi areas — Kiryas Joel, for example, currently has a response rate of only 48.7%.

The pandemic makes the council’s work more difficult, but some of the challenges predate coronavirus.

Borough Park is home to a population that is often distrustful of government; is usually not consuming media like the internet, television and radio and lacks a robust tradition of secular education. They are also wary of officially identifying themselves as Jews, lest history repeat itself and the state use the information to persecute them.

What’s more, the pandemic intersected with some of these other issues to strain the community’s relationship with Mayor Bill de Blasio. He singled out Jewish city residents for what he said was a failure to abide by social-distancing rules. Those comments weakened an already-tenuous trust in the government, said Greenstein and others.

Samuel Heilman, a professor of Sociology at Queens College who studies Haredim, said of New York, “The view of the government here is a little bit jaundiced” for Jewish residents in places like Borough Park. The community is also holding de Blasio’s closure of parks frequented by Haredi children against him.

“In the pandemic, many of them have felt that the government, certainly at the local level — and they don’t really make big distinctions between one and the other — is not on their side,” he said. “There’s an atmosphere of suspicion.”

When stay-at-home orders hit, Jewish Community Council staff pivoted to organizing food drives where families hit hard by the pandemic could get food and complete the census. Some methods of outreach, like flyers given to yeshivas for children to take home, did not have the impact that was desired after schools were shuttered due to the virus. They are still trying to use that method, but through summer day camps.

Greenstein said he’s still worried about the turnout after so many opportunities were lost to the pandemic.

The pandemic robbed his outreach effort of two months, he said: “Key months. The most important months that would have been our strongest focus on the census, completely taken away from us.”

The federal government understands the challenges involved in reaching Haredi communities, in Brooklyn and beyond, said Jeff Behler, director for the Census Bureau’s New York Regional Office. He said the bureau coordinates with local officials and community leaders to tailor outreach. In Borough Park, for example, the census bureau knows residents “didn’t want an outsider coming in and talking about the census.”

The bureau also knows that Orthodox residents, as well as many others, have concerns about privacy, but the government has not had any problems so far keeping peoples’ data safe, said Behler. Nationwide, most of the people who have responded to the 2020 census have done so online, said Behler. The census got additional funding around five years ago to protect respondents’ privacy.

While the census is not available in Yiddish, the bureau has created videos in the language and an eight-page document that residents can print in Yiddish with instructions on how to complete the census.

He said he is “amazed” by how partners like the Boro Park Jewish Community Council have “reengineered themselves during COVID.”

A month after this effort was supposed to end, Greenstein continues on his crusade to combat misinformation about the census and get his neighbors counted, to show the nation that Haredi residents are doing their civic duties and being represented. The Boro Park Jewish Community Council is working with synagogues to plan outreach for Yom Kippur and Rosh Hashanah. They’ll continue trying to get people to take the census through October.

And has he filled out his census?

“Absolutely,” he laughed. “If I’m not gonna complete the census, what message am I sending?”