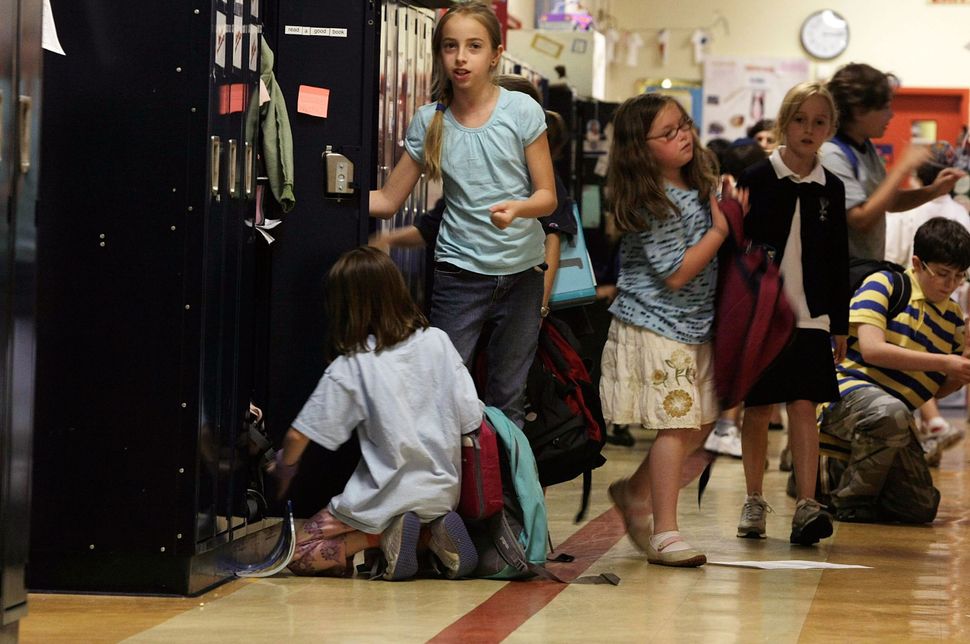 Students at the Jewish Primary Day School May 27, 2008 in Washington, DC. Image by Alex Wong/Getty Images

A new report argues that private schools, including Jewish ones, received an outsized amount of federal coronavirus aid compared to the number of students they serve.

The report, by the group Americans United for Separation of Church and State, calculated the amount of federal dollars received by religious, secular private and public schools and divided that number by the student population. Private schools received aid under the Payroll Protection Program, while public schools received support from a different pot of money — the “ESSER” funds.

“The worry in the long run that this will really be counterproductive — it will open up your religious school, your religious house of worship to government intrusion,” said Samantha Sokol, the main author of the report from Americans United for Separation of Church and State. “With government money comes government strings.”

The majority of PPP loans that went to religious schools were paid to Christian schools. Still, using the lowest estimates for money allocated to Jewish schools, which serve about 255,000 students nationwide and the lowest estimates for total PPP and education funds allocated to all schools, Jewish schools received about 1.4% of the total federal coronavirus aid to schools while serving only about .5% of students, according to a Forward calculation based on figures from Americans United.

Advocates for religious schools said this comparison between public and private schools is unfair, since PPP loans were not specifically designed as education aid, and were instead created to keep Americans employed regardless of their place of work.

Religious groups, including the Orthodox Union, Agudath Israel of America and Jewish Federations for North America lobbied the federal government to get nonprofits, including schools, eligible to receive the federal PPP money.

There are 861 Jewish schools with nearly 255,000 students in the United States, according to the most recent count. They include massive yeshivas and tiny Montessori day schools.

Some private schools will also get aid through the ESSER funds, depending on how public school districts decide to allocate their funds to schools in their areas.

The allocation of public funds to private schools, and religious schools in particular, is one of multiple separation of church and state battles being waged during the coronavirus era. The Trump administration, which has supported many policies sought by private schools and religious schools in particular, has come to the defense of houses of worship it said have been unfairly targeted by social distancing measures, for example.

Betsy DeVos’ education department has also released guidance advising public school districts to allocate education relief based on total enrollment at private schools rather than the enrollment of poor children, which public school and separation of church and state advocates have resisted.

The Reform movement and parts of the Conservative movement have previously spoken out in favor of greater separation between church and state, but the dire financial conditions created by the pandemic have complicated the stances of some religious institutions, said Katy Joseph, the director of policy and advocacy for Interfaith Alliance, a multi-faith group that supports the separation of church and state.

“My sense both for Jewish communities and for other faith communities is that the current crisis has really forced some difficult conversations,” she said. “Congregations, religious schools, organizations have come down in a lot of different places on whether and when it makes sense to accept federal funds, because of course nobody wants to furlough or let go staff that make these institutions what they are.”

The report from Americans United for Separation of Church and State uses SBA loan data for loans larger than $150,000, and the SBA does not give the specific loan amount for each business. Instead, each organization that received a loan is assigned to a bracket, which is why the report’s estimate for Jewish schools encompasses such a big range.

“Many schools, like millions of other small businesses, applied for PPP loans so that they could keep their hardworking teachers and staff on payroll,” said Motzen, of the Agudah.