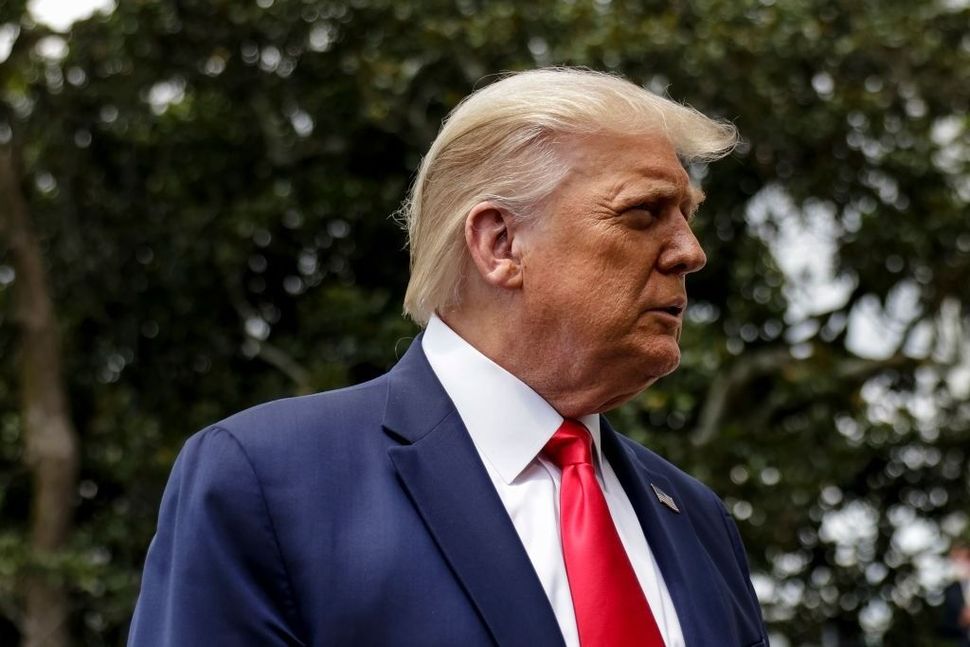 President Donald Trump stops to talk to reporters as he departs the White House for a trip to Ohio, August 6, 2020. Image by Samuel Corum/Getty Images

President Trump told a group of Jewish supporters at a fundraiser Sunday that “we need more Jews in the U.S. that love Israel,” the Orthodox news outlet Belaaz reported.

The event was held at the Long Branch, N.J. home of the late Stanley Chera, a real estate developer and a friend of Trump’s who died in April due to complications from COVID-19.

“Unfortunately there are Jews that don’t like Israel,” Trump said to over 200 Jewish supporters present. “You just lost a great supporter of Israel, Elliot Engel,” he said, referring to the Jewish New York congressman who lost his primary to progressive challenger Jamaal Bowman.

Trump’s comments echoed similar remarks he made last year, when he said that Jews who vote for the Democratic Party are “very disloyal to Israel.”

The event was held in a packed outdoor tent where most participants did not wear masks, according to footage shared on social media. Attendees were tested for the virus in a drive-through testing facility set up for the event.

Trump reminded the crowd that he had moved the American embassy in Israel from Tel Aviv to Jerusalem. He also promised that if he were reelected, “we will have a deal with Iran within four weeks.” In 2018, Trump removed the United States from the nuclear agreement that his predecessor Barack Obama had signed with the Islamic Republic along with leaders of five other major world powers. Trump had complained that the deal did not do enough to stop Iran’s nuclear program.

The price of admission to the fundraiser started at $5,600, with a $250,000 ticket buying a roundtable sit-down and photo-opportunity with the president.

At the opening of the reception, local rabbis recited a blessing for the president. As Trump got on stage, the crowd chanted, “Four more years!”

Haim Chera, the son of Stanley and a principal at his father’s company Crown Acquisitions, introduced the president. “Your sincerity and care for my father I will never forget,” Haim Chera said to Trump. “You told me he was a real friend to you, and that you knew Stanley was an authentic friend, with no agenda other than to support you.”

Stanley Chera was a real estate developer and a philanthropist for many Jewish causes, well-known in the Syrian Jewish community in New York City and in Deal, N.J. for his generosity. He was the owner of several high-end properties in Manhattan, including the St. Regis New York Hotel and the Cartier Mansion. Chera also donated more than half a million dollars to Trump’s election and re-election campaigns, The New York Times reported.