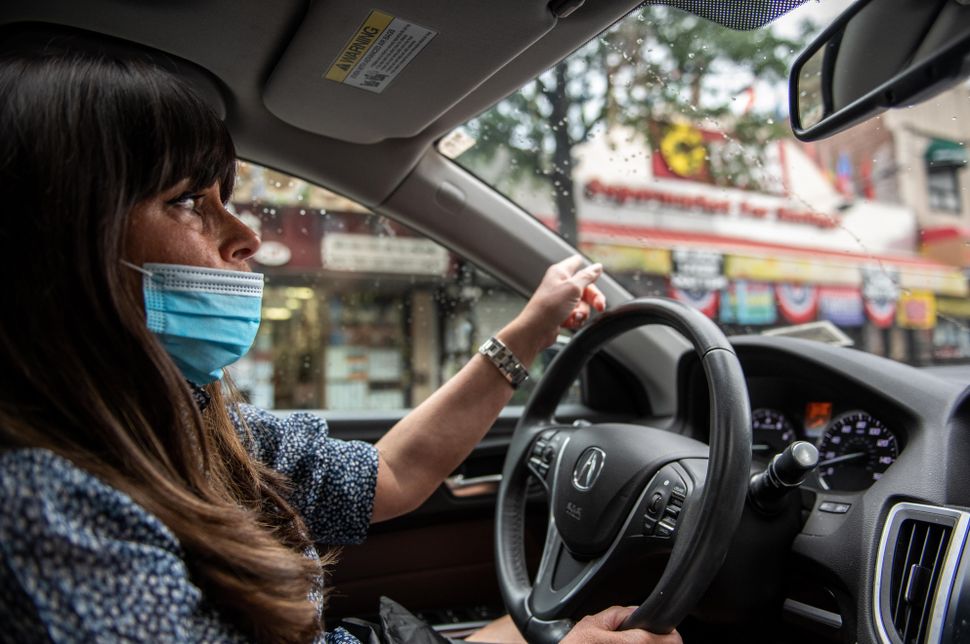 Devorah Halberstam, the co-founder of the Jewish Children’s Museum, points out landmarks in Crown Heights. Image by Paul Stremple

Jewish Crown Heights residents remember microscopic details about the riots of 1991 — 29 years ago, on Wednesday.

They recall the acronyms used to differentiate between the different types of ambulances that served the victims of the car crash that started it all. They remember the ins and outs of the court cases for one of the killers of Yankel Rosenbaum. They talk about the word the murder weapon was etched with (“killer”), the words that Al Sharpton said in a eulogy about Jews in the neighborhood (“diamond merchants”), the minutiae of the days and nights that were dissected and argued over for decades afterwards.

“I still hear the footsteps, the pounding of people running along Eastern Parkway, screaming, ‘Get the Jews’ and ‘Hitler didn’t finish it,’” said Crown Heights resident Devorah Halberstam, who co-founded the Jewish Children’s Museum that sits at the heart of the neighborhood. “I didn’t read it in the paper. I didn’t hear it from somebody else. I watched it with my own two eyes.”

About 60% of Crown Heights is Black, according to census data, and most of the foreign-born population claims a birthplace in the Caribbean.

Census data do not track religion, but about 2,500 homes reported speaking Yiddish, out of about 34,600 homes that spoke a language other than English. The neighborhood is home to the Chabad-Lubavitch movement, a Hasidic sect that stayed in the area during white flight in the 1960s and 1970s at the behest of the Lubavitcher Rebbe Menachem Mendel Schneerson.

The riot began after a car in the motorcade of a Hasidic leader accidentally struck and killed seven-year-old Gavin Cato, the child of Guyanese immigrants. Rumors circulated that the Jewish ambulance service, Hatzolah, abandoned the child; that EMTs treated the driver first; that the driver was drunk. Violence erupted in the neighborhood. Residents marched in the street for four days and a group of young Black men surrounded Yankel Rosenbaum and stabbed him.

Now, nearly 30 years later, New York City saw 242 anti-Semitic hate crimes in 2019, according to the NYPD. In Crown Heights, an Orthodox rabbi was attacked with a paving stone. That same week, an Orthodox Jewish driver was hit in the eye with what news reports said was a block of ice or a rock.

This anniversary, coming as it does after a year of violence perpetrated against both Orthodox Jews and Blacks, lays bare a rift, said Jewish residents of Crown Heights. And it’s not between them and the Black people they share the neighborhood with; it’s between them and non-Orthodox Jews they felt abandoned them in 1991, and who still haven’t really come through.

These feelings of bitterness and trauma run so deep that they persist to this day.

A number of the perpetrators of the violent incidents that happened in 2019 were reportedly Black men, and Jewish leaders question whether the response would have been more unified had perpetrators fit a more politically convenient profile.

Also, Jewish news outlets, including the Forward, called out citizens and especially fellow Jews for not doing or saying enough.

“If the perpetrator wasn’t a white supremacist who voted for Trump, then it didn’t really happen, did it?” asked Forward Life editor Avital Chizhik-Goldschmidt in late August of 2019.

To be sure, the Jewish community broadly did respond to violence against visibly Orthodox Jews more quickly, and with more concern, in 2019 than they did in 1991.

The ADL doubled funding last year for an anti-bias education program in public schools, and has offered dozens of cash rewards for information about perpetrators of hate violence.

“ADL has worked for almost three decades to improve relations in the aftermath of the riots,” said Alexander Rosemberg, ADL NY/NJ Deputy Regional Director in a statement.

The community also staged a massive march in January to protest the violence against visibly Orthodox Jews, such as those in Crown Heights.

Yet those whom the event purported to stand up for had some qualms about it. It generated criticism from some Haredi Jews who are culturally opposed to organizing events around negative subjects. Was this really an event in partnership with the affected community?

For some Crown Heights Jews, it felt a lot like the time of the riots. 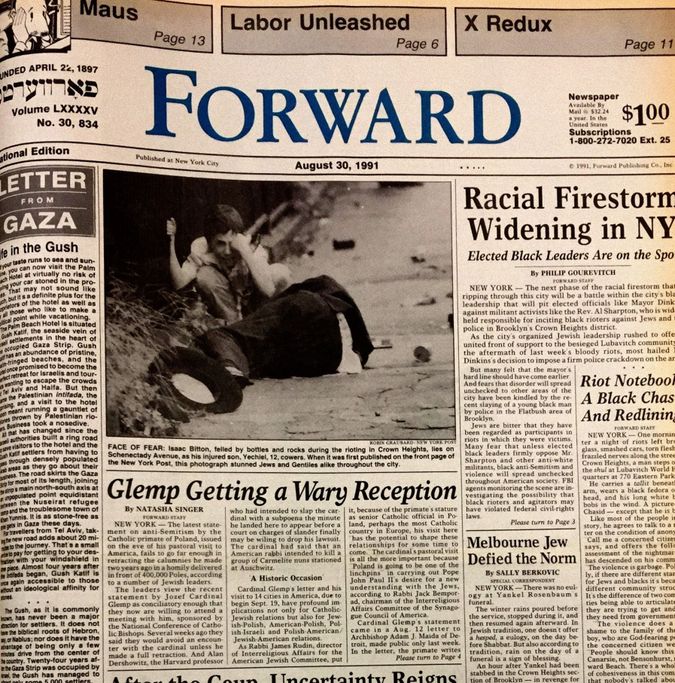 The Forward’s coverage of the Crown Heights riot from 1991. Image by Chana Pollack

One Jewish leader from outside their community did speak out on their behalf, and articulated some of what they were feeling. Abraham Foxman, then-national director of the Anti-Defamation League, criticized his own organization from within: “You could say, ‘What took the Anti-Defamation League 10 days to call you together and to say there is anti-Semitism in Crown Heights?’” he said, as printed in the Sept. 6, 1991 issue of the Forward, “There seems to be a self-imposed self-restraint. There seems to be a color consciousness operating when the issue comes to anti-Semitism.”

Residents describe a disconnect, a feeling of being misunderstood, mischaracterized and blamed for the riots, memories that still buzz like phantom phone calls in the back pocket.

“Our enemy wasn’t really the Black, our enemy was the successful Jew living in suburbia,” said Rabbi Shea Hecht, a Crown Heights resident and the chairman of the board for the National Committee for the Furtherance of Jewish Education. They “had no understanding of what really took place in Crown Heights, and they were quick to pass judgement and say that it was the rich Jews taking advantage of the poor Blacks. That was not what was going on in this neighborhood at all.”

Indeed, Jewish residents of Crown Heights say that justice was never served. They feel their fiercest and most effective advocate was not a Jewish New Yorker. Instead, it was Norman Rosenbaum, Yankel Rosenbaum’s brother and fiercest advocate.

And less than a month ago, he died at age 63, likely closing the book on finding the rest of the crowd that killed the 29-year-old student. The brothers were Australian, and that’s where Norman died.

One man did go to prison for Yankel’s murder, but it took a lot of work on Norman’s part. Lemrick Nelson received a 10-year prison sentence after an acquittal in a state murder trial, a conviction in a federal civil rights trial that was eventually overturned and an eventual retrial. Norman flew back and forth from Melbourne to keep the issue in the public eye as apathy threatened to soak into the community like syrup.

The family eventually sued the hospital that treated Yankel, winning a $1.25 million settlement for medical malpractice after doctors did not address one of his four stab wounds for an hour.

But according to those who knew Norman, that was not enough.

“There were still many people who participated that night in a stabbing that never had to answer to anybody,” said Hecht, the rabbi, who used to host Norman Rosenbaum at his home during trips from Australia. “That’s painful, and that was one of the things that Norman went to his grave with, saying, ‘I didn’t complete my entire mission.”

Yet despite this history, and recent acts of violence, today’s residents don’t see Black-Jewish tension ratcheted up by gentrification at the root of their problems. Instead, it’s the individual person on the street who fails to understand the complicated and intentionally insular lifestyle of the Orthodox Jews of Crown Heights.

“You can’t blame a whole community because of individuals who have committed those crimes,” said Devorah Halberstam of her Black neighbors. “You just can’t live in that mindset, otherwise you’ll never be free.”

Halberstam’s son, Ari, was killed in a terror attack in 1994, three years after she witnessed the Crown Heights riot. She’s learned from her own experience, she said, that “you never get complete justice,” and “whatever justice you do get you have to fight tooth and nail for.”

Halberstam has devoted her life to building bridges in Crown Heights and beyond, co-founding the Jewish Children’s Museum that she devoted to her late son. She described a Black child visiting the museum and making a shofar by hand. 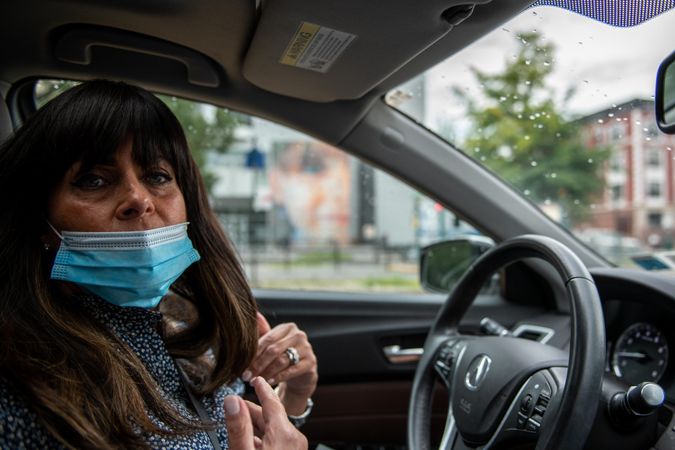 This, she said, is the kind of thing that prevents violence from happening again. Education is the key to peace, said Halberstam and others in the neighborhood.

She and Richard Green, the head of the Crown Heights Youth Collective, are working this week on One Crown Heights, a day of festivities usually held outdoors, that this year is all virtual. This Thursday and the following, from 6 p.m. to 8 p.m., storytellers and musicians will perform and parents will fill out the census and help children meditate.

For Crown Heights’ most devoted peacekeepers, the work does not stop, even though 29 years have passed.

“Young people ask me all the time questions about that — ‘Why do they do this? Why do they do that? Why can’t a man shake a woman’s hand? What are those little tassels that they wear?’” said Richard Green. “Those are questions that young people have and once they understand what is going on there, it’s much easier for them to accept it.”

Green has been at the forefront of community-building efforts in Crown Heights since before the 1991 riot that has forever stained the neighborhood. At the center of his philosophy is finding common ground between people living in seemingly different universes on the same block.

Green helped Hasidic families in the neighborhood turn on the lights and the fan on Shabbat when he was a child. He recalled being gifted with a coin left on a plate for his service.

“Sometimes it feels a little tough: some say it may feel like carrying water in a strainer,” he said. ”But to me, at least we’ll get some of it to the other side.” 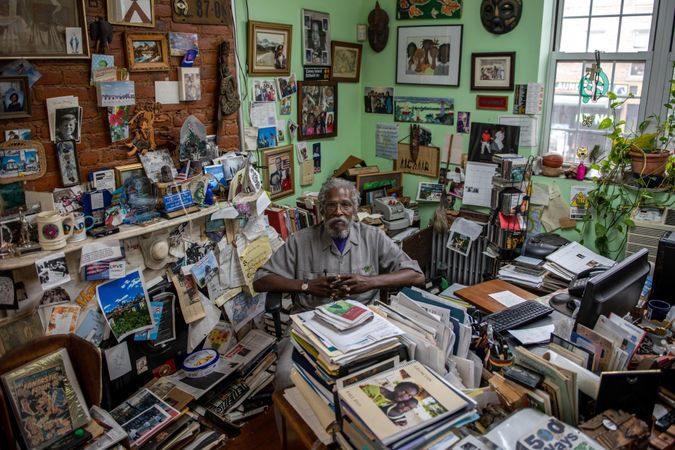 And he said that the neighborhood’s progress showed this spring, when protests in other neighborhoods about George Floyd’s killing by a police officer descended into chaos, but Crown Heights remained mostly calm.

“We were able to keep our communities from going to that level that we’ve seen happening,” he said.

Towards the end of our interview, Green took out a photo he took on his cellphone and printed out on a sheet of photo paper. He handed over the picture, which showed three Hasidic boys and one Black boy on a basketball court.

“One thing they have in common is the game they’re playing,” he said. “All the other stuff? Secondary.”