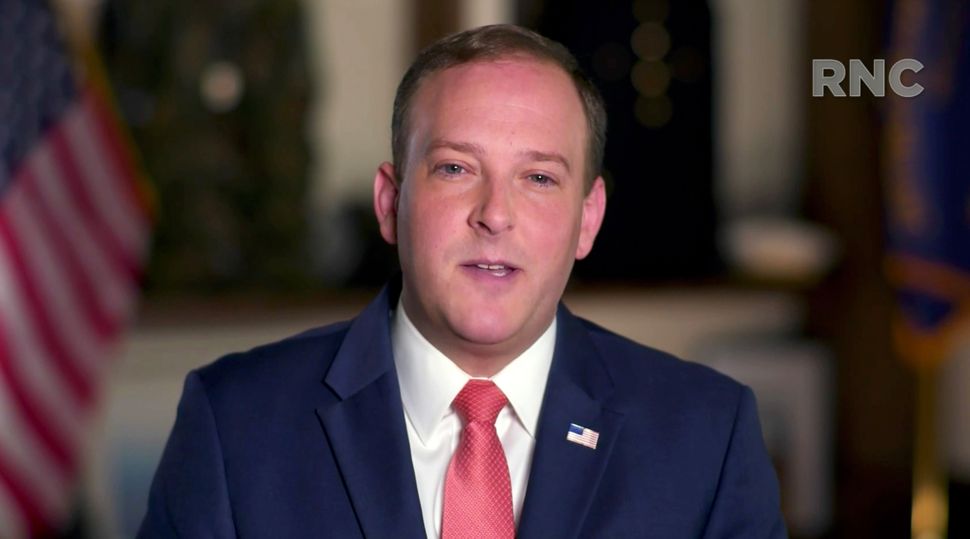 Zeldin also praised the president’s response to the COVID-19 pandemic.

“During a once-in-a-century pandemic, an unforeseeable crisis, sent to us from a far-away land, the president’s effort for New York was phenomenal,” Zeldin said.

Zeldin has tied his electoral fortunes to Trump’s, a popular move among his district’s Republican voters, but still a risky bet in one of the country’s “truest swing districts,” as one political analyst has described it. For his loyalty to the president, Zeldin has been rewarded with access to the White House and vocal support from Trump in his 2018 campaign.

Speaking in a pre-recorded address at a Veterans of Foreign Wars Hall, Zeldin shouted out front-line medical workers, relating a story about the premature birth of his twin girls and their precarious health during the first months of their lives.

That experience, he said, pushed him to get on the phone with Jared Kushner when he found out his district was running low on personal protective gear for medical workers. Zeldin claimed that, as a result of his conversations with the White House, the Trump administration directed hundreds of thousands of N95 masks to Suffolk County.

Zeldin also claimed that Trump authorized private labs in New York state to test for the virus “at blinding speed,” which is false. On March 13, the FDA did allow the state to contract with private labs to process coronavirus tests, doubling the state’s testing capacity in the near term and drawing praise from New York Governor Andrew Cuomo.

But it took a while — a week before, Cuomo had lambasted the federal government for not authorizing private labs to do the tests.

And Trump’s own testing plan, released in late April after he repeatedly claimed inaccurately that the country’s test capacity was “fully sufficient to begin opening up the country,” also called for less testing than what public health experts said was necessary.

Zeldin also gave Trump a shoutout for sending thousands of ventilators to New York, which the federal government did do. On March 24, the state received 4,000 ventilators after Cuomo called on Trump for help.

That 4,000 ventilators (of a reported 8,000 in federal stockpiles) was still far short of the 30,000 ventilators health officials had said the city would need. In early April, Cuomo ordered 1,000 ventilators directly from China, as states competed for the machines and other medical supplies without a central federal plan for distributing the supplies.

New York never ended up needing as many ventilators as originally forecasted, and by mid-April was sending the machines to nearby states managing their own surges in cases.

“We are the land of the free, because of the brave, and we are the land of opportunity, because we have a president who wants to empower the best of who we are to be the best that we can be,” Zeldin said of Trump in concluding his speech. “There’s never been a nation greater than ours, never a people more resilient than ours, and never a future for America more promising than ours right now.”