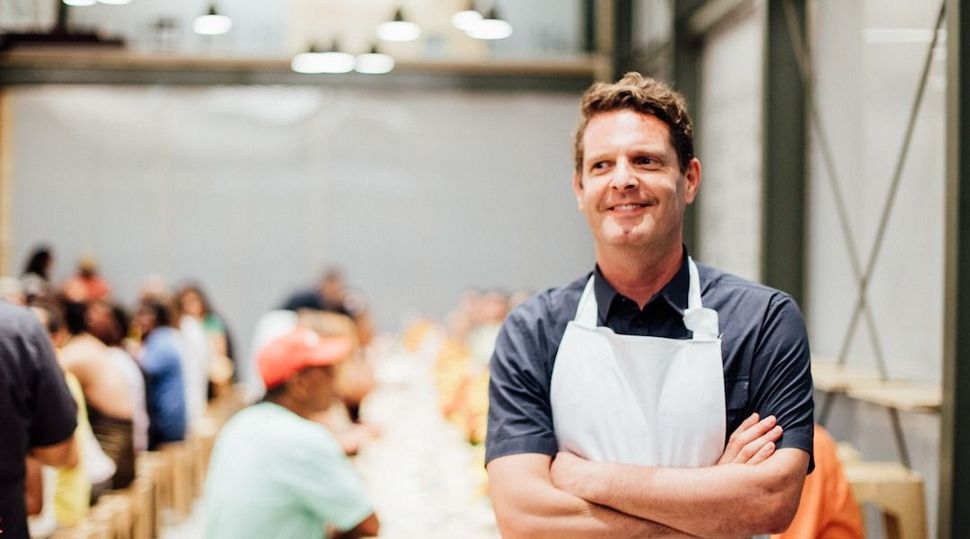 David Hertz is the cofounder of Gastromotiva, a Brazilian-based organization that fights unemployment and social inequality. Image by Courtesy of the Charles Bronfman Prize

The Brazilian chef and activist David Hertz has been preparing for this pandemic long before it hit.

When it did, the virus laid bare a lot of gaps in American society, but perhaps the harshest one is this: between those who can enjoy the time to make sourdough, cook meals with their family and plant a garden, and those who could not, quite literally, put food on the table.

Food insecurity, as a landmark photo essay in The New York Times recently showed, is rampaging through America’s lower and middle-classes along with the coronavirus. More than 37 million Americans are food insecure, according to the U.S.D.A. Each time I post a new dish to my Instagram, I feel fortunate and guilty. How can people who love food bridge the divide between the food-fortunate and the food-insecure?

Hertz, 46, has been doing just that for a long time. “Hunger” is one word with a complicated set of causes — economic inequality, food waste, racism, and education to name a few. So Hertz’s organization, Gastromotiva, has taken a variety of approaches to tackling it.

The organization trains residents of low-income neighborhoods to become professional chefs. It created Solidarity Kitchens to enable these students — 6,000, by Hertz’s count — to earn a living by supplying healthy food to their neighborhoods. Gastromotiva’s food bank in Brazil has distributed more than 55 tons of food and prepared more than 90.000 meals for homeless and vulnerable people since COVID-19 exploded in Brazil. Hertz also helped found the Social Gastronomy Movement (SGM)— using food as a mechanism for social change, which has created $10,000 grants for ten organizations worldwide using a grassroots approach to alleviating hunger.

It’s a lot. When I reached Hertz by Zoom at his apartment in Rio de Janeiro, I asked him how he would sum up his approach. Not surprisingly for someone who began his professional career in culinary school, he reached for a kitchen metaphor.

“We cook solutions for social inequalities,” he said. “We use food as a tool to bring empathy, interdependence, understanding how everything in the world is interdependent.”

Hertz was raised in what he described as a small, inward-looking conservative Jewish community in the south of Brazil. His family was in the embroidery business, and they expected him to go into the business too.

Instead, at age 18, he went traveling — and discovered food.

His food growing up was basic, he said, “just sustenance.” India and Asia opened his eyes. A stint as a volunteer in the kitchen at Kibbutz Hatzerim helped propel him toward culinary school.

But cheffing at the fine dining establishments then taking off in Brazil’s booming early-2000s didn’t satisfy him. A friend asked him to show some impoverished residents of a nearby favela how to cook.

As Hertz told the story to me via Zoom, he walked onto the balcony of his apartment and pointed his camera toward a tram station two blocks away. The tram leads directly up a shanty-covered hillside, where some of the country’s poorest residents live.

Hertz’s parents were sure he wouldn’t make it back alive. Why, they wondered, couldn’t he just go into the family business?

“When I went there, that became my spiritual calling. I knew I had been getting prepared to become that person,” he said.

Inspired by chefs Jose Andres and Jamie Oliver and microfinance pioneer Muhammad Yunus, Hertz founded Gastromotiva, to train residents of these favelas to be chefs themselves.

In 2016, during the Rio Olympics, Hertz and famed Italian chef Massimo Botura created Refettorio Gastromotiva in a Rio favela, a restaurant that fed poor residents by turning food from the games that would otherwise be wasted into healthy meals. When the pandemic forced the Refettorio and the school to close, Hertz pivoted to the food bank and Solidarity Kitchen.

Now there are 28 such kitchens in Brazil and three in Mexico. One of the Solidarity Kitchens is in Hertz’s family synagogue in Sao Paulo, Communidad Shalom. After Hertz spoke there, the synagogue decided to become a Solidarity Kitchen and now prepares 1,250 meals per month for homeless and vulnerable people in its area.

“They’re feeding the poor for free, but the people who do it get paid, and that’s wonderful,” said Hertz.

The work has earned Hertz accolades: the 2019 Charles Bronfman Prize and the Basque Culinary World Prize “special recognition” for his COVID-19 response.

Hertz is planning to bring the model to cities around the world, including the United States. One kitchen opened in Minneapolis, sponsored by the group Appetite for Change. Others are planned in the coming year for Los Angeles, New York, and Miami. His goal, he said, is to feed a million people each month around the world through Solidarity Kitchens.

For now, the quarantine has Hertz stuck in Brazil. He is cooking a lot — just like the fortunate among us. Cooking is where he still draws inspiration for his work toward social change.

“It’s my meditation,” he said.

He is also working on a model to make Solidarity Kitchens sustainable, and not solely rely on charitable contributions.

With a grin, he acknowledged that meant figuring a way to make the kitchens profitable, “some kind of social business.”