Something remarkable, maybe even historic, happened when Palestinian terrorist Leila Khaled appeared live via YouTube — the site knocked her off.

Just 22 minutes into a long-planned Sept. 23 seminar featuring Khaled, the transmission abruptly stopped and a message appeared against a black screen: “This video is unavailable.”

Those four words capped an intense, weeks-long battle over Khaled’s appearance on a panel sponsored by San Francisco State University. As opponents finally convinced one tech platform — Zoom — not to host the panel, organizers scrambled to Facebook, only to be blocked there too. Finally they flipped to YouTube, where the company took them off one channel, then knocked them off again when they popped up on another.

In the end, opponents declared a victory not just against Khaled, but for the very idea that Big Tech has the right — and the responsibility — to limit speech on its platforms.

“Today was an important day,” said Jonathan Greenblatt, chief executive officer of the Anti-Defamation League. “Three of the most prominent brands in Silicon Valley stepped forward and said, ‘Enough. We don’t want our brands associated with this kind of bigotry. We don’t want our products to give voice to people who have snuffed out the voices of other people.’”

Whether the move means Zoom, Facebook and YouTube will work harder to referee the messages and people that appear on their platforms remains to be seen. The decision may also backfire on the very groups claiming victory.

“By taking this action Zoom is saying they do bear a responsibility for the content on their platform,” said Suzanne Nossel, chief executive officer of PEN America and author of “Dare to Speak: Defending Free speech for All.” “Is that something they’re willing to take on?” Announcement of speaking engagement with Leila Khaled Image by Twitter

“There’s no liability on the part of Verizon if you engage in conspiratorial action over the phone,” she said. “This seems to blur the line that Zoom would have potential culpability. I’m surprised that’s the direction the company wants to go in In.”

Nossel made clear she was not addressing the validity of the concerns over Khaled, but the larger issue over free speech and new technologies. Who’s to say, asked Nossel, that in the future, pressure won’t be applied to Zoom and similar companies to prevent seminars on abortion, or in favor of Israel, or any number of controversial subjects?

“People may try to exploit this for causes they disagree with,” she said.

The ADL sees it differently. It has been working with the NAACP and other groups in the #StopHateforProfit coalition to pressure platforms to take stronger measures against hate speech and other misuses.

“Zoom has the right to choose,” said Greenblatt. “It’s not just a medium. These are platforms.”

In any case, Greenblatt said, canceling an appearance by a convicted terrorist and wanted fugitive is a low bar when it comes to policing content.

“It sets a precedent that some ideas are not in bounds,” said Greenblatt.

Khaled is a senior member of the Popular Front for the Liberation of Palestine, a U.S.-designated terrorist organization. In 1969, she hijacked a TWA flight, later blowing up the front of the plane. A year later she was captured during a foiled attempt to hijack an El Al flight.

She was scheduled to be the featured speaker at a virtual discussion titled “Whose Narratives? Gender, Justice and Resistance,” organized by SFSU’s Arab and Muslim Ethnicities and Diasporas Studies department. University President Lynn Mahoney said in a statement defending the panel that she condemns anti-Semitism and “other hateful ideologies that marginalize people based on their identities, origins or beliefs,” but is also convinced that a public university is “committed to academic freedom … and scholarship without censorship.”

As soon as publicity for the event went out in late August, Jewish groups attempted to persuade Zoom not to play host.

The Lawfare Project argued to the university and Zoom that Khaled’s appearance at the event would be a violation of American law.

In a letter to the U.S. Department of Justice, an attorney with The Lawfare Project wrote that providing Khaled with a platform to speak to college students “may give rise to violations” that make it “unlawful to provide material support or resources to a foreign terrorist organization.” Khaled is a senior member of the Popular Front for the Liberation of Palestine, a U.S.-designated terrorist organization.

One of the organizers of the program, Rabab Abdulhadi, wrote in an email to those who had registered for the Zoom program that “Zoom has threatened to cancel this webinar and silence Palestinian narratives. We expect SFSU/CSU to uphold our freedom of speech and academic freedom by providing an alternative venue to this open classroom.”

On Sept. 22, a day before the planned event, the Lawfare Project joined with other groups demonstrating outside of Zoom’s San Jose, California offices to protest plans to use Zoom for the program. The groups, including the ADL, SFSU Hillel and Shield of David, joined under the name #EndJewHatred.

Zoom later issued a statement to the Lawfare Project saying Khaled’s “reported affiliation or membership in a U.S. designated foreign terrorist organization” was a violation of Zoom’s Terms of Service.

In an email to the campus community Sept. 23, Mahoney wrote that the university “disagrees with and [is] disappointed by Zoom’s decision not to allow the event to proceed on its platform.” 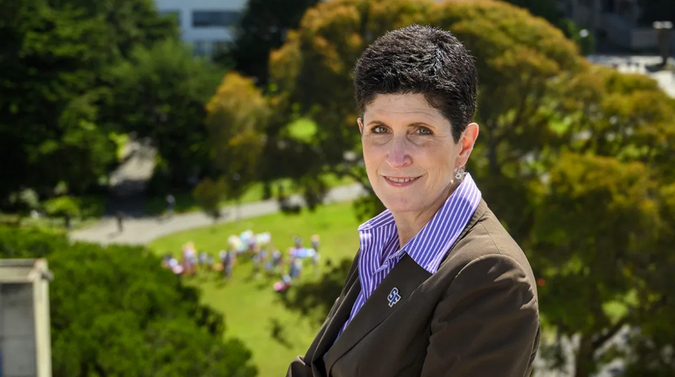 Lynn Mahoney is the president of San Francisco State University. Image by SFSU

“Zoom’s cancelation of the event will be deeply wounding to some members of our community who will feel themselves and their dissent silenced once again, just as the participation of Leila Khaled in a class panel discussion is deeply wounding to others in our community. We cannot embrace the silencing of controversial views, even if they are hurtful to others.”

Zoom’s last-minute cancellation sent the organizers to Facebook Live, which turned them down as well.

Gerard Filitti, senior counsel for the Lawfare Project, said his organization “contacted counsel at all of the major platforms to advise them” that the university was planning to use its platform for its program and that “this was a violation of the law and they could face criminal penalties for hosting it.”

He said organizers “waited until the last minute to try to sneak it in onto Youtube.”

When YouTube took down the initial transmission, the group switched to another channel. YouTube shut down that transmission as well.

Judging by live comments during the program, of the 987 viewers who tuned in, many were opposed to it.

Khaled appeared as one of the panelists on screen but remained silent as a professor introduced her and the program at length. The program was shut down before her turn came to speak.