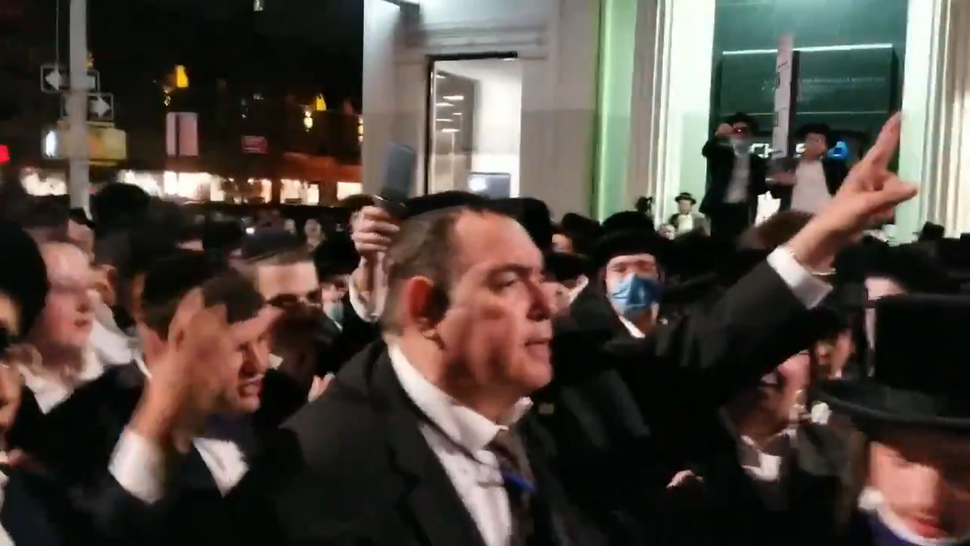 At the gathering, a video shared on social media and first reported by JTA showed protesters burning a pile of masks in protest of the governor’s new rules.

There is a mask burning going on in Boro Park, Brooklyn. pic.twitter.com/HKebbFp3pr

One person, Berish Getz, was in “critical condition” after being beaten with rocks by protesters, according to reporting from Jacob Kornbluh of Jewish Insider. The person was seen in videos being treated by members of the Orthodox ambulance team, Hatzolah but is now in stable condition and undergoing body scans for injuries from the attack.

The man is the brother of Mordy Getz, a businessman and the owner of the large Judaica shop Eichler’s, who has been the subject of threats for months for repeatedly calling out community members for not following safety rules and continuing to gather for prayer services during the pandemic. Getz did not immediately respond to a request for comment.

Update: One person in critical condition — being transported to Maimonides Hospital — after beaten with rocks by protesters at the anti-Cuomo protest in Borough Park early this am pic.twitter.com/aGIYgst91p

A police spokesperson said in an emailed statement that one person was injured “from a physical confrontation with other congregant(s),” but was in “stable” condition. Police did not make any arrests or issue any summonses, according to the statement. The statement did not respond to an emailed question about protester interactions with police.

Videos from the scene also showed a crowd of Orthodox men assaulting a man with a camera.

“You’re not going anywhere!” one man can be heard yelling, while other voices yell to stop.

The man could be seen in later videos running away from the crowd.

Some reporter got swarmed and chased out by Jews in Borough Park tonight. What a scene. Wow. pic.twitter.com/m0WVTsOniT

Heshy Tischler, an Orthodox radio personality who has mocked city and state health rules and encouraged going maskless, took center at the protest.

“You are my soldiers,” he told the crowd of mostly men over a loudspeaker. “We are at war.”

Kalman Yeger, the city council representative for Borough Park, also joined the protest, encouraging the crowd to push back against what he characterized as infringement of their religious freedom.

“We are not going to be deprived of the right that we have in America, like everybody else in America, the right to observe our religion,” he said. “I don’t care who in government thinks that they can stop us, they’re wrong. Let them try.”

Coumo announced Tuesday afternoon that the state would soon limit attendance at indoor religious gatherings to 10 people in coronavirus hotspots in and around New York City, including major Orthodox hubs around Borough Park, in the Kew Gardens area of Queens and in Orange and Rockland Counties.

He framed the new rules as a necessary measure to save lives, invoking in all but name the Jewish ethic of pikuach nefesh, which requires breaking religious rules to preserve life.

“In Jewish teaching, one of the most precious principles is saving a life,” Cuomo said. He added that he was imposing the harsh rules “out of respect, and it’s out of love, and it’s because I want to protect them.”

But the rules began to generate backlash even before his Tuesday afternoon press conference concluded.

Orthodox figures said that while Cuomo had met with Orthodox leaders from the region earlier in the day to urge them to enforce existing health rules, he had not told them about the impending 10-person cap, and had told them that they would only need to enforce 50 percent capacity at religious institutions in their communities.

A statement from Orthodox lawmakers in the Borough Park area released Tuesday evening accused Cuomo of “a duplicitous bait-and-switch.”

“Governor Cuomo’s surprise mass closure announcement today, and limit of 10 individuals per house of worship in ‘red zones,’ is appalling to all people of religion and good faith,” the group said in a statement.

This week, ultra-Orthodox communities are celebrating the harvest holiday of Sukkot, whose observance requires gathering in small huts, and looking forward to Simchat Torah on Saturday night. In Orthodox communities, both holidays are famous for parties filled with dancing, which often spill out into the street outside synagogues.

The new rules will effectively outlaw any kind of holiday gathering that Orthodox communities would be used to, and they come as some in the community are already openly flouting rules at both indoor and outdoor events.

I’ve always advocated respectful dialogue to resolve issues. What @NYGovCuomo did now isn’t tough love or diplomatic it’s a blindside & likely unconstitutional. There was NO discussion of reducing houses of worship to 10 today. Religious & communal leaders did NOT agree to this! pic.twitter.com/3p6yZylBXj

The new rules announced Tuesday could go into effect as early as Wednesday but no later than Friday, Cuomo said. The divide hotspot areas into yellow, orange and red zones, with graduated restrictions on businesses, schools and religious gatherings for each designation.

In addition to Borough Park, the rules will clamp down hardest on Hasidic hubs in Orange and Rockland counties. The Hasidic village of Kiryas Joel, in Orange County, has a positive test rate of nearly 28 percent, the highest in the country.

The Orange County map has KJ right in the middle pic.twitter.com/vMuPCa0C0o

In addition to the limit on the number of people who can gather inside, nonessential businesses and schools in the hardest hit areas will be closed.

A spokesperson for the state Department of Health did not immediately respond to a question about whether the rules apply to outdoor gatherings in designated “red” zones. Many Orthodox communities also held services outside during Rosh Hashanah and Yom Kippur, both in small backyard services and in large tents.

The protest Tuesday night came after police clashed Monday evening with young Orthodox revelers in Crown Heights. The neighborhood, a hub of Hasidic Jews in the Chabad movement, is not facing a shutdown, though its average rate of positive coronavirus tests over the last two weeks is at 2.41 percent, putting it at number two on the city’s list of areas they have not shut down but are still monitoring closely.

At the event — a dance celebration for “Simchat Beit HaShoeva,” a festival marked by Orthodox Jews during the holiday of Sukkot — police did not disperse the crowds of hundreds of dancers, which videos showed had few people wearing masks.

During the celebration, officers closed off a block of Kingston Avenue for the dancers “to ensure public safety and to reinforce the importance of best health practices,” a spokesperson for the NYPD said in an emailed statement.

Officers did not issue summonses or make arrests because “there was no reason for such enforcement,” the spokesperson said.

Members of New York City’s Orthodox community had already expressed frustrated with what they have characterized as culturally insensitive and limited outreach by the city from contact tracers and the health department, and some had signaled that civil disobedience would follow from draconian shutdown rules being implemented in Orthodox neighborhoods.

Many in the community have felt caught in the middle as they try to encourage fellow Jews to adhere to distancing rules even while bristling at what they have described as the government’s ineffective approach to educating the community on state rules. Their concerns stretch back to March, when early spikes of the virus in Hasidic areas led to a social media backlash that identified Hasidic communities with the virus itself.

“We have to crack down very, very hard on people that are in violation” of the rules, said Rabbi Yoel Schonfeld, the leader of Young Israel of Kew Gardens Hills, an area included in the shutdown.

“On the other hand, we feel that we are having an unfair finger pointed at us” by politicians, Schonfeld said. “The way they are talking so brazenly about the Orthodox community, they probably never have done so with any other ethnic group.”

Cuomo’s press conference compounded Orthodox frustration because it revealed inconsistencies between the state and the city’s plans.

On Sunday, New York City Mayor Bill de Blasio proposed a closure of nonessential businesses, which Cuomo waffled on, deciding in the end that he was in favor of it.

Here are Cuomo’s new coronavirus restrictions. It is not clear how the mapping of these areas will be done. pic.twitter.com/L7DCqJ8h1A