A billboard that appeared on Highway 17 in Savannah,GA on Oct. 25.

George Soros, the billionaire Jewish philanthropist, is back in campaign news again — as if he ever left.

This time he has popped up in a controversial race in coastal Georgia, but the Philadelphia-based group behind the ads says it is targeting at least 40 candidates nationwide.

A billboard that appeared on Highway 17 in Savannah,GA on Oct. 25.

Earlier this month, billboards aimed at defeating Cook Jones went up, proclaiming she “is funded by George Soros.” Mailers reached voters with the same message. The billboards were taken down within a day after members of the local Jewish community complained to the billboard company, but locals continued to receive mailers.

Soros, who is 90, remains a favorite bogeyman for right-wing groups opposed to his support of liberal and progressive causes and candidates. As part of his efforts, he funds a Political Action Committee, Justice & Public Safety, that supports reform-minded candidates in state and local elections whom opponents characterize as anti-police, as they have in the Georgia race. 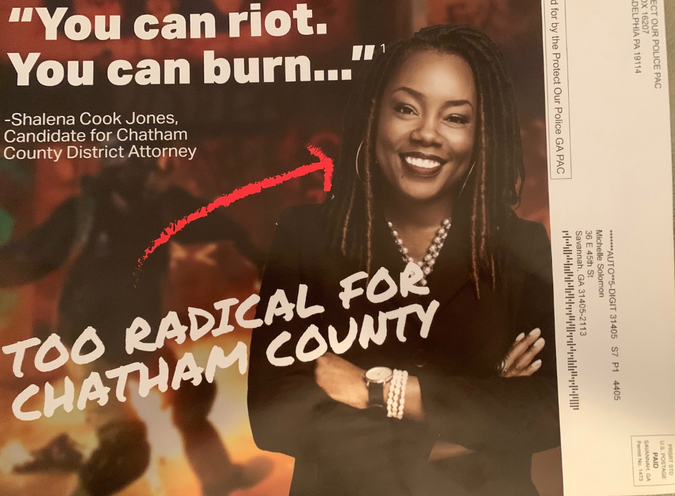 A mailer sent to households in Savannah, GA.

But the ADL and other anti-hate organizations contend that the mere mention of Soros by groups opposed to him embodies antisemitism, given his Jewish heritage and the abundant anti-Jewish conspiracy theories that contend Soros and other wealthy Jews rule the world.

“There are those in our community who see it that way, as well,” said Adam Solender, executive director of the Savannah Jewish Federation. Most of Chatham County’s 4,000 Jews live in Savannah. “That’s unusual here for an election; it’s unusual in general. Antisemitism here almost does not exist. Jews have been living here in Savannah for 285 years.”

The billboards and mailers were the handicraft of a new political action committee, Protect Our Police, a Philadelphia-based group formed in July in the aftermath of the killing of George Floyd by police in Minneapolis and the demonstrations and protests for racial justice that followed throughout the summer.

The PAC is supporting 40 candidates for various offices in 15 states, including 12 for the state legislature in New York. The rationale, its website says, is “to combat the anti-Police agenda, calls to defund and disband Police departments, and toxic rhetoric and headlines that have dominated the news cycle over the last decade.”

The police PAC’s work is also a direct response to the Soros PAC, as Nick Gerace, the PAC president and a former Philadelphia police officer, told the right-leaning One America Network in a recent interview.

“We’re going to be the counterpunch to George Soros and his campaign and agenda of anarchy and lawlessness all across this country,” he said.

“Let-em-go-Larry is very much on our radar for next year,” Gerace told the Philadelphia Inquirer.

By law, PACs cannot work with a campaign, but it’s not uncommon for many of them to have a nod-nod-wink-wink relationship with the campaign they are assisting.

But in a video of Heap speaking at an Oct. 12 campaign event, posted on social media by Cook Jones, Heap cites Soros as a financial backer of various protest groups around the country, a reference that “has blatantly played upon white supremacist fears that he is secretly plotting America’s violent destruction,” according to an opinion article in savannahnow.com by Cathy Skidmore-Hess, a history professor at Georgia Southern University, and Michelle Solomon, a community activist. 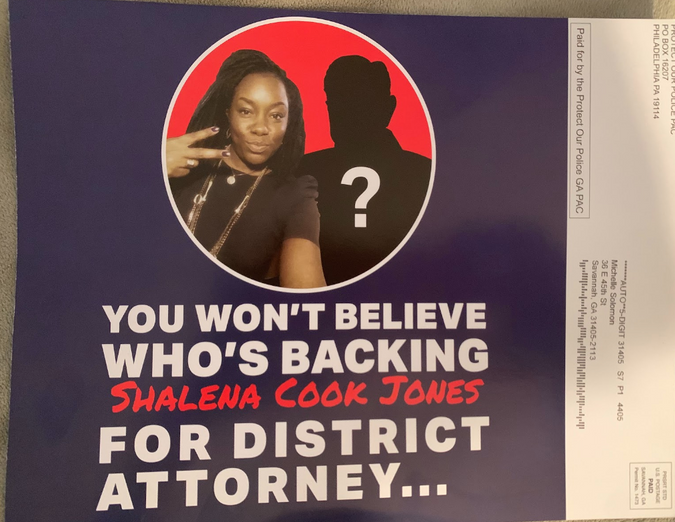 A mailer sent to households in Savannah, GA.

Besides the references to Soros, the Protect Our Police efforts in Georgia have also an image of Cook Jones that appeared doctored and words attributed to her that her campaign insists were taken out of context — the combination of which has lent a racist tinge to the messaging.

A photo from Cook Jones’s Facebook page shows her with her first two fingers in a V peace sign, evoking to some a nod to gangs; cropped out of the photo is her daughter beside her, giving the same sign. The police PAC denied altering the photo in any way, Gerace said. He also contended that the billboards came down “to shift strategy and change creative,” not as the result of any community pressure.

The billboards also used a quote attributed to Cook Jones as she campaigned at a busy intersection — “You can MARCH. You can RIOT. You can BURN.” But they appear without what she said before — “You can do this. Vote. Vote” — and after: “But we need you to vote, to make a difference.”

“Is there a racism component” to the anti-Cook Jones campaign? Certainly,” said Solender. “There is a heightened awareness of it within the Jewish community.

Dominic Mangoni, chairman of Protect Our Police who retired after 35 on the Philadelphia police in 2012, a year he was the city’s highest paid employee with a salary of $310,436, referred questions about his group’s work to Gerace. But Gerace, who retired from the force after 12 years in 2011, declined an interview request. In an email response to several messages, he said the group is “too busy” with elections so close at hand.

As a result, it remains unclear whether Protect Our Police is using references to Soros or suggestive racial images in other campaigns. According to the Daily Caller and other published reports, the PAC has raised nearly $1 million since its formation. Gerace said in a follow-up email that Cook Jones is “the only candidate we know of who is supported by George Soros who we are campaigning against.”

While there has been no polling in the Georgia race for the next four-year term, Daniel Skidmore-Hess, a professor of political science at Georgia Southern and husband of Cathy Skidmore-Hess, rated the election “a tossup.”

That might not be so surprising in a solid Republican state that has been trending Democrat in recent years, which accounts for its two tight senate races this year and polling that suggests Joe Biden has a better-than-even chance of defeating President Trump, who won the state by five points in 2016. Jill Biden campaigned in Savannah on Oct. 26, and Joe Biden made two stops in Georgia on the 27th — Warm Springs and Atlanta.

Heap won her first term in 2012 with nearly 60 percent of the vote. Four years later she ran unopposed. Whether Soros is a factor or not, this time, said Daniel Skidmore-Hess, “she has a serious challenger.”

Michael Janofsky is an editor and writer in Los Angeles.