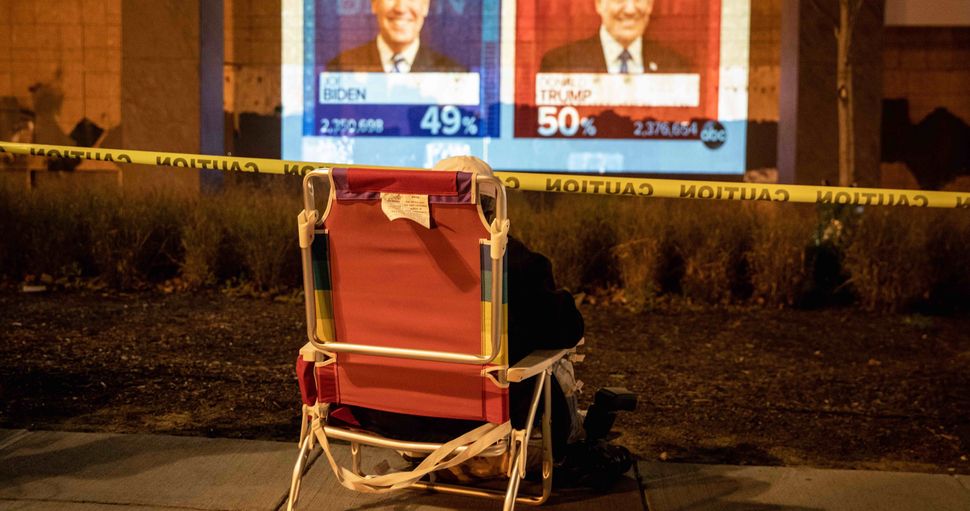 Rabbi Joshua Heller was trying to settle into a Tuesday evening Zoom class on the Cairo Geniza, the ancient archive of Jewish life, but his congregants had more contemporary concerns on their mind.

“People were like, ‘But we have to watch the results,’” said Heller, senior rabbi of Cong. B’nai Torah, outside of Atlanta. “I was like, ‘If we get any real information on who is president before 9 p.m., I will eat a geniza fragment.’”

American Jews are about as politically engaged as they’ve ever been, and for many that meant deep anxiety as results-predicting needles wobbled and definitive answers proved elusive throughout Tuesday evening.

Recent polls suggested that nearly three-quarters of American Jews planned to voted for former Vice President Joe Biden, placing their hope in him to address coronavirus and unite the country.

But significant swaths of the community were pulling for President Donald Trump to be reelected to further safeguard Israel and protect religious liberties of Orthodox groups.

With antisemitism on the rise, many Jews on both sides of the political spectrum have described this election as the most Jewish one of their lives.

“It’s been a while since I have seen people really invoke their Jewish identity in terms of choosing a candidate in the way that I have this year,” Heller said.

Some turned to prayer to address the uncertainty. One video sent around social media early Tuesday showed a young man davening while draped in a large Trump flag.

Had extra Kavvanah this morning on Hashivah Shofeteinu and Sim Shalom.

Others studied Torah. Victoria Cook, the moderator of the progressive Facebook group Torah Trumps Hate, said she was drinking red wine while studying with her son from the Book of Kings, which she described as being “all about corrupt kings and how to run a just nation. Very on point!”

About 2,000 people tuned into a Zoom program put on by T’ruah, the rabbinic human rights group, designed as Jewish counter-programming to CNN’s “Magic Wall” and other sources of educated guess-making. Jews from around the country expressed their thanks in the comments to have a place to not think about the demographic nuances of Pennsylvania counties.

Rabbi Angela Buchdahl of Central Synagogue in Manhattan opened the T’ruah program with a song based on the words of the Emma Lazarus poem inscribed on the Statue of Liberty. She asked the hundreds already watching to not think of the election as being about one man or one party winning, or red states and blue states.

“It’s about compassion winning, and humanity winning,” she said. “Remember, it is purple mountains majesty that make America beautiful.”

Despite the ongoing lack of answers, there were Jews in purple states, as well as those who bet big on this election, who were trying not to get caught up in the crush of getting the latest news immediately.

“To me this is not entertainment, this is serious business,” said Dr. Richard Roberts, a retired pharmaceutical executive in Lakewood, N.J., who has donated hundreds of thousands of dollars to Trump and other Republican campaigns.

Instead of checking the results, Roberts said he was organizing the house, checking his email and feeding his collection of hundreds of tropical fish spread across several tanks.

Katie Vogel, a co-founder of the independent Jewish community Havayah, in Cincinnati, said that she was fielding endless texts from members watching the tightening race in Ohio. She said she was encouraging them to take it slow.

“Hitting refresh constantly on your computer, on the AP’s website or The New York Times, is not good for your health, and humanity, and yiddishkeit,” Vogel said.

But the tension still ate into people on both sides of the contest who were hoping for a decisive answer Tuesday evening.

Rivkie Feiner, a nonprofit consultant and a life-long resident of the Hasidic hub of Monsey, N.Y., said she and her whole family were glued to all of their screens.

“In terms of our religious perspective, faith in Hashem” — God — “is what’s keeping me — I can’t say calm, but as calm as I can be right now,” she said.

Feiner, who said she voted for Trump, said that she has never seen stronger or more passionate support for a Republican candidate in Monsey than this year.

“We did what we were supposed to do, but the results are not in our hand, they’re in His hand,” she said.