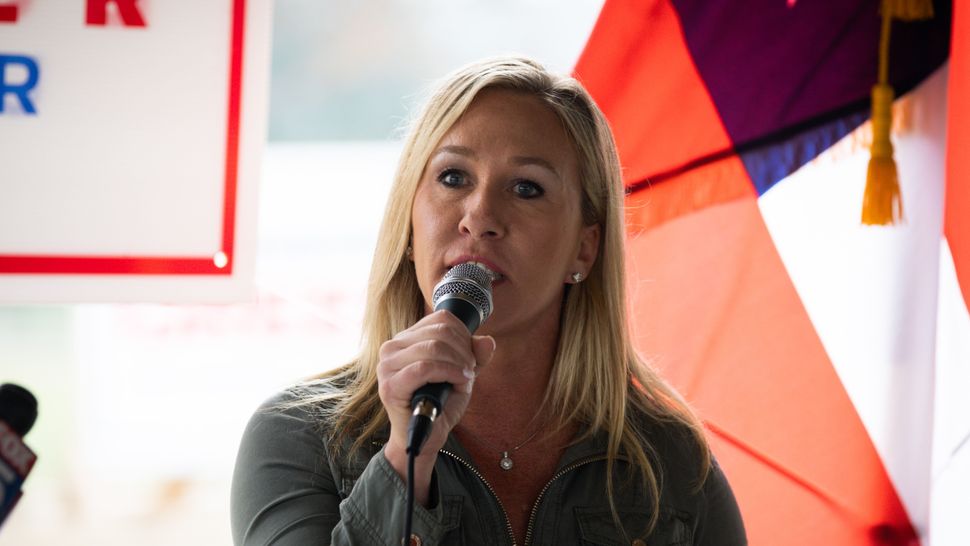 Georgia Republican House candidate Marjorie Taylor Greene endorses Sen. Kelly Loeffler (R-GA) during a press conference on October 15, 2020 in Dallas, Georgia. Greene has been the subject of some controversy recently due to her support for the right-wing conspiracy group QAnon. Image by Dustin Chambers/Getty Images

The antisemitic QAnon theory alleges that a satanic cabal of elite Democrats and Hollywood celebrities is running a child sex-trafficking ring and harvesting children’s blood to stay young — and two women who have publicly supported it won seats in the U.S. House of Representatives this week.

Marjorie Taylor Greene of Georgia and Lauren Boebert of Colorado are the first QAnon supporters to walk the halls of Congress, but some analysts say they might not be the last.

Angelo Carusone, CEO of the liberal watchdog Media Matters, says those victories — despite heavy losses for other far-right candidates like Laura Loomer in Florida — are a sign of a steady rightward shift in the Republican Party, even if President Donald Trump loses the election.

Those candidates’ success says as much about where Republicans “are as about where they’re going,” he said.

The far-right candidates are “here to stay,” he said. “They’re not going anywhere.”

Marjorie Taylor Greene’s spokesman Nick Dyer said Greene had not mentioned QAnon since announcing for Congress, even though in September she tweeted the QAnon hashtag #SaveTheChildren.

(Dyer also called the Forward “the Fake News Media,” and suggested that this reporter “move on with your life,” and “think about a different career.” )

In 2017, she was recorded saying, “There’s a once-in-a-lifetime opportunity to take this global cabal of Satan-worshiping pedophiles out, and I think we have the president to do it.”

Yet Joe Watkins, a former White House aide to former President George H.W. Bush, said these victories are isolated incidents, not a trend, and he is “not concerned.”

“Candidates who cater to the more extreme versions of what people in the party say can sometimes win,” said Watkins, who is also a host of the television show “State of Independence.” But “political parties necessarily have to think about how they win in the next cycle.”

Both the Democratic and Republican parties have over time struggled to contain far-right and conspiratorial candidates. Hugo Black, a Democratic U.S. Senator in the 1920s, was a member of the Ku Klux Klan. But candidates with ties to the “alt-right,” which emerged in 2016, and the QAnon conspiracy theory, which emerged in 2017, have so far tried to find their home in the Republican Party.

In March of this year, Republican leaders in Illinois embarked on a massive publicity push involving robocalls, ads, door-knockers and mailers to convince voters not to support a Republican primary candidate, the former leader of the American Nazi Party Arthur Jones. He lost, but still won more than 1,600 votes in the district.

In June, Iowa Rep. Steve King, who retweeted a British neo-Nazi and endorsed a white nationalist politician in Toronto, lost his primary after the Republican Jewish Coalition raised $40,000 to unseat the incumbent.

And the RJC called on the president to “provide greater moral clarity in rejecting racism, bigotry, and anti-Semitism” after Trump’s assertion that there were “fine people on both sides” of a white supremacist rally that turned violent in Charlottesville.

After Greene won her primary, two congressmen introduced a resolution condemning QAnon. It passed, but 17 Republicans voted against it.

Boebert said in May she hopes QAnon “is real because it only means America is getting stronger and better and people are returning to conservative values.” In August, a spokesperson said she does not support QAnon or other conspiracy theories.

While the two women are the only victors tied to QAnon, Media Matters released a list of 27 candidates who have endorsed, given credence to or promoted the QAnon conspiracy theory who ran for Congress this November.

Carusone said far-right and conspiratorial candidates received contributions from “big money donors,” support from establishment politicians like the Governor of Nebraska and even from President Trump.

Also, Laura Loomer — a far-right Republican provocateur who lost her race for Congress in Florida — Cawthorn, Greene and Boebert beat out more moderate primary candidates, said Carusone. That’s a reflection of “how power is being organized on the fringes.”

The election itself has shown the power of conspiracy theories in the Republican Party.

As the president continues to baselessly claim that the election was stolen from him, there has already been a cleavage in the party between those who are pushing that as a conspiracy theory and those who are staying out of it.

Loomer’s Telegram message to supporters Wednesday claimed without evidence that there was “lots of voter fraud” and “we don’t have free & fair elections anymore.”

Greene asked in a tweet that “every ILLEGAL vote must be thrown out and prosecuted,” though there has been no evidence to suggest that workers are counting anything but legal votes.

“Where are Republicans! Have some backbone,” tweeted Eric Trump, the president’s son. “Fight against this fraud. Our voters will never forget you if your [sic] sheep!”

All but one of the 12 Republican politicians or Republican strategists contacted for this article either did not respond or declined to comment.