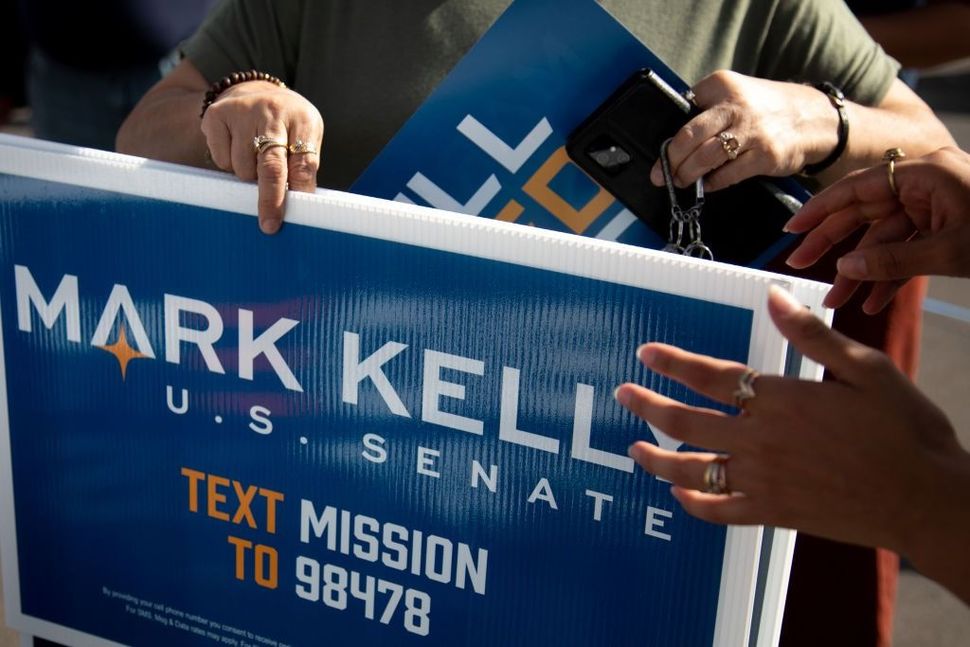 When U.S. Rep. Gabby Giffords was shot outside a Tucson-area grocery store in 2011, she represented a blue island in the largely red sea of Arizona. The attempted assassination of Giffords, who is Jewish and had spent several years in the state legislature before being elected to Congress in 2006, shocked the state’s Jewish community.

Shir Attias, 23, who grew up attending Temple Chai in Phoenix, said it motivated her to become involved in activism around gun control. “I remember it clearly despite being very young,” Attias said. “It was one of the things that got me into politics.”

Today, Arizona is very different. A Republican stronghold has become a swing state — and people like Attias, who works for the Jewish Democratic Council of America, are coming into their own as Jewish activists who see a chance to turn Arizona blue.

This year, Giffords’ husband, Mark Kelly, soundly defeated his Republican opponent, U.S. Sen. Martha McSally. Kelly’s race was an opportunity for Arizona’s liberal Jews, long in the political minority, to help Democrats pick up a Senate seat while supporting a candidate many in the community were fond of.

“Gabby Giffords is a figure that people love in the Jewish community,” said Rabbi John Linder of Temple Solel. “I think she was a motivator for Jews to support Mark Kelly’s campaign.”

The state has changed a lot since Republican presidential candidate Mitt Romney won Arizona by 10 points in 2012, one year after Giffords’ shooting. In 2016, President Donald Trump carried it by nearly four points. Now, as votes continued to be counted there on Sunday, President-elect Joe Biden holds a narrow lead in the state.

Arizona is likely to remain competitive in future elections as Democratic voting blocs gain ground. Jewish voters make up 2% of Arizona’s population, more than any swing state outside of Florida (4%) and Pennsylvania (4.5%), experts say they are not yet a cohesive political group.

Florida and its 772,000 Jewish voters has long been the focus for Jewish organizations trying to influence the presidential election. This year was no exception, with liberal groups like Bend the Arc, IfNotNow and the Jewish Democratic Council of America all investing heavily in the state. The Republican Jewish Coalition spent at least $15 million to persuade Jewish Floridians to tick the box for Trump.

“One thing about Florida is that usually a few thousand votes can really make a difference,” said Michael Binder, a political science professor at the University of North Florida. “This year was really an outlier.”

As Florida becomes less competitive — Republicans have swept the last three statewide elections — Arizona, and its own substantial set of Jewish voters, is seeing its elections get tighter with each cycle.

Arizona’s estimated 135,000 Jews are concentrated in Phoenix and the surrounding Maricopa County, which has helped the state turn purple.

“The places where we saw the highest Democratic vote totals this year are also the places where there are the most Jews,” said Kent, the Bend the Arc strategist.

Arizona’s Jews are significantly more liberal than the state’s overall population, according to the American Jewish Population Project. Thirty-six percent of Jewish adults identify as liberal, compared to 24% statewide.

But religious identity doesn’t seem to play a large role in the politics of most state residents, said Brooks Simpson, a political historian at Arizona State University. Simpson said that race, class and culture dominate. Republicans appeal to white-middle class voters, especially those native to the state, for example, along with some long-term Latino residents opposed to recent immigration. Democrats rely on younger Latino voters and recent arrivals from California, New York and Illinois, who bring liberal politics with them.

Liberal voters began to become more vocal 10 years ago around passage of SB 1070, the anti-immigration “show me your papers” legislation and the racist policies of Maricopa County Sheriff Joe Arpaio which included instructing his deputies to target Latino residents based solely on their race.

“These people resent the image that Arizona has sometimes projected nationally — framed by SB 1070 and the Arpaios of the state — and they want to push back against that,” Simpson said.

Linder, the rabbi of Temple Solel, said the 2020 campaign is the most politically active he has seen Arizona Jews since they mobilized to oppose SB 1070 more than a decade ago. But the engagement of many of his congregants and other Jews around the state is on both sides.

“The Jewish community does not speak in one voice,” Linder said.

Faith Boninger is one of Linder’s congregants who actively supported Democratic candidates this cycle. She phone-banked in favor of an education-funding ballot measure through a nonpartisan interfaith group that works with Temple Solel, and hosted a virtual party for Hiral Tipirneni, a Democratic congressional candidate.

Tipirneni narrowly lost her race to Republican incumbent David Schweikert in a district where Jewish voters make up 6% of the electorate — the highest in the state. Trump won the district by almost 10 points four years ago and Schweikert took 62 percent of the vote. This year, Schweikert won with about 52%. Presidential results for the district were not immediately accessible.

Boninger is also part of the local chapter of the National Jewish Women’s Council, a liberal group, but she said Judaism was not central to her political identity.

“I do naturally gravitate toward it but it’s also the network that I’ve built up,” Boninger said. “A lot of these things are just based on happenstance.”

State Rep. Aaron Lieberman, a Democrat and social entrepreneur who won his Maricopa County district by less than 2% in 2018 and was reelected this year, said he sees many progressive Jews like Boninger involved in political activism. But he doesn’t see the “Jewish vote” as a meaningful segment of the Arizona electorate.

“I don’t think the Jewish community is big enough or monolithic enough to be courted as a whole,” Lieberman said. “And it’s not like they go to a meeting and say, ‘OK, who should the Jews vote for?’”

Yet people like Attias, the organizer who entered politics after the Giffords shooting, are starting to actively court Jewish voters as Jews. The Jewish Democratic Council of America, where she works, called and texted Jewish voters in the state more than 46,000 times during the election. The group’s digital advertisements received 3 million views, she said.

Bend the Arc also focused its phone- and text-banking program on Arizona as one of a handful of swing states it targeted this year. Kent said the organization didn’t have specific numbers for the state, but contacted over 4 million voters nationwide.

Attias said it wasn’t always “Jewish” issues that motivated Jewish voters. She saw some suburban Jewish voters, including Israeli-Americans who had been less engaged in previous election cycles, vote for Democrats this year out of concern over the local response to COVID-19.

“We just experienced such a dearth of leadership from our governor — who fell in line with Donald Trump every step of the way — that I think especially in the Maricopa County suburbs, Jewish voters said enough is enough.”

Lieberman said that while politicians may not be actively courting the state’s Jewish population, elected officials have made gestures that recognize its growing influence. He cited unanimous support in the legislature for a bill that would have mandated Holocaust education in the state’s public schools. Its passage was stalled by the pandemic, but the state board of education recently adopted similar standards.

“That just speaks to a real passion for Jews and Jewish voters in Arizona,” Lieberman said.