Georgia’s election-weary Jewish community is ready for another fight 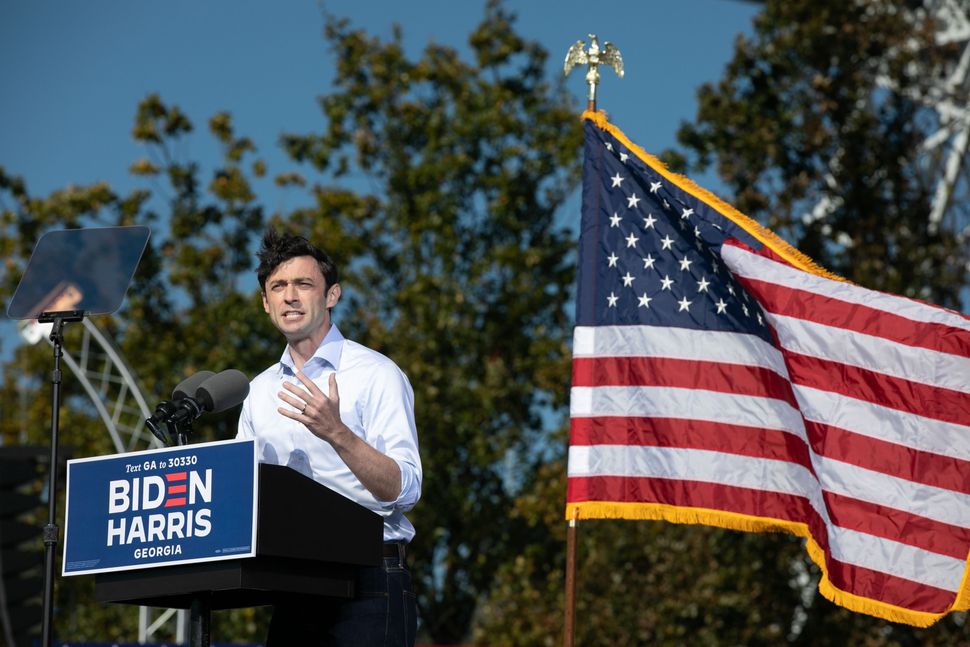 Jon Ossoff addressing a crowd in Georgia. Image by Getty

The next high stakes election is in Georgia, and the Jewish community is ready for it.

Local synagogues and political groups are planning efforts to get people who will turn 18 before the vote to register. The Republican Jewish Coalition has raised money and is sending staff over from Florida. The Anti-Defamation League is monitoring for an expected uptick in antisemitic social media messages related to the campaigns.

“We don’t get a moment to rest in Georgia,” said Allison Padilla-Goodman, vice president of the ADL’s Southern offices. “It’s gonna get ugly.”

Both of Georgia’s Senate seats are in play in two Jan. 5 runoffs. The close margin of Georgia’s presidential contest — about 12,000 votes, as of Monday evening — has led some to wonder about the role the state’s Jewish community could play in helping decide the runoff, which most political observers see as all-or-nothing for either party.

Since runoffs generally have depressed turnout, political observers and organizers say, securing a better edge from the Jewish community, with its consistently high voting rate, could be what puts either party in control over the Senate.

In Arizona, Georgia, Pennsylvania, Wisconsin and Nevada, President-elect Joe Biden’s margin of victory amounted to fewer votes than the number of votes cast for him by Jewish voters, said Halie Soifer, the director of the Jewish Democratic Council of America, citing estimates of the Jewish votes in those states based on a national survey of Jewish voters from the progressive group J Street. Absent those voters, Soifer concluded, Biden may not have won.

Already, Georgia’s election season has been notable for its Jewish resonances.

Jon Ossoff, who is challenging incumbent Sen. David Perdue, is Jewish. If elected he would be the first Jewish Democrat to hold statewide office.

In July, the Perdue campaign ran a digital ad that enlarged Ossoff’s nose, drawing accusations of antisemitism. Perdue apologized for the ad and blamed it on an outside graphic designer.

Over the past several months, Georgia’s Jewish community has tracked the rest of the country’s heightened political passion, said Dov Wilker, the regional director for Atlanta for the American Jewish Committee. In Georgia, he said, the enthusiasm is driven by the Jewish elements of the campaigns, as well as perennial Jewish issues like Israel, and especially domestic issues, such as the pandemic and systemic racism.

“What I’m seeing is a lot more people who until this election were not politically involved, and are now trying to get people to vote, curing ballots, doing all they can to ensure their candidate wins,” Wilker said.

No reliable data has emerged from the election so far that could help estimate Jewish voter preference in Georgia. But the state’s community of roughly 103,000 Jewish adults is slightly more conservative than the Jewish community nationwide, according to population data shared by Professor Leonard Saxe, director of Brandeis University Steinhardt Social Research Institute.

This tension between the two political poles is embodied in some of Atlanta’s leading Jewish institutions, many of which receive funding from local Republican donors. Bernard Marcus, the co-founder of Home Depot, is a major donor to President Donald Trump as well as a philanthropist in the Jewish community — including to his synagogue, The Temple, where the senior Rabbi Peter Berg has been vocally supportive of the local movement against systemic racism, and is personal friends with Rev. Raphael Warnock, the Democratic candidate challenging Sen. Kelly Loeffler.

Berg said that the Jewish community has been affected by the strong statewide push, spearheaded by former gubernatorial candidate Stacey Abrams, to register new voters.

“There is a real momentum in Georgia this year for registering and for voting that I haven’t seen in a long time,” Berg said. “The Jewish community likewise, from both sides, has really felt the push to get out there and vote.”

Local Jewish groups have differed in their approaches: The Jewish Democratic Women’s Salon, centered on a private Facebook page with 1,600 members, aims to get Jewish women involved in general voter outreach. Local Republican Jewish groups are targeting people inside the community, according to Dan Israel, a product manager who has been part of Georgia’s delegation to the Republican National Convention four times.

Israel has worked with the Loeffler and Perdue campaigns. He is not a Trump fan — “Trump was not one of my first 17 choices,” he said — but he has begun encouraging moderate Jews to embrace a divided government led by Biden, as a check against the progressive wing of the Democratic Party.

Valerie Habif, a co-founder of the Jewish Democratic Women’s Salon, said that its volunteer members focus almost exclusively on encouraging non-Jews to vote. They recently worked to cure ballots in the wake of the election, and have otherwise spent the election season phone- and text-banking, sending postcards and dropping off literature in the place of in-person canvassing, which they plan to continue for the runoff.

“We do not need to work to get the Jewish vote out,” Habif said. “The Jewish community knows how important their vote is. They don’t sit out elections.”

With Jewish groups inside Georgia up and running, national groups are now setting their agendas and planning their attack.

The Republican Jewish Coalition has already spent $150,000 since Sunday afternoon, according to its executive director Matt Brooks. Its Florida staff will become its Georgia staff, and it is planning new digital ads to target Jewish voters.

The message, Brooks said, will be that “Keeping a Republican Senate is a brake on extremism, and will ensure that the Democrats don’t have a blank check to give to” the party’s progressive leaders, like Alexandria Ocasio-Cortez and Bernie Sanders. (Brooks told JTA that the RJC will not refer to Biden as “president-elect” until “states certify the election and the courts have ruled on allegations of fraud and irregularities.”)

Soifer, of the Jewish Democratic Council of America, said her group is focused on making sure Jews don’t miss the runoff vote, and they will continue airing their 15-second ad highlighting the Perdue campaign’s Ossoff-nose incident.

“Jews didn’t want to see an incumbent senator attack a candidate based on antisemitic stereotypes,” Soifer said. “And we’ll continue to remind them.”

At the ADL, Padilla-Goodman says that they are already hearing concerns about antisemitism and misinformation related to the runoffs entering the political conversation on social media. She expected that her office would put out a statement this week urging candidates and campaigns not to use antisemitism as a wedge tool.

“We know that in times of insecurity and political instability, antisemitism can flare, and we’re ground zero for that in Georgia right now,” she said. “We’re kind of bracing ourselves.”

So far the runoffs have continued to make news over Jewish issues.

Warnock recently came under fire from some Atlanta Jews after Jewish Insider noted that he signed onto a 2019 statement from a group of Christian clergy that visited Israel and the West Bank that likened the “heavy militarization of the West Bank” to “the military occupation of Namibia by apartheid South Africa.”

The statement specifies that its signatories “support a two-state solution in which a safe and secure State of Israel will reside next to a safe, secure, viable, and contiguous State of Palestine.”

Loeffler, Warnock’s opponent, seized on reports of the Israel statement in a tweet Monday evening, accusing Warnock of “a long history of anti-Israel extremism” and referring to the Black Lives Matter movement as “anti-Zionist.” (Loeffler, whose husband is Jewish, has campaigned with Marjorie Taylor Greene, the newly elected Georgia representative who has expressed her support of QAnon, the antisemitic conspiracy theory.)

Warnock’s Jewish supporters in Atlanta noted in response that he has attended the AIPAC policy conference with Berg, leader of The Temple.

Brooks said that he felt that Israel statement Warnock signed could hurt the candidate’s chances with Jewish voters. But Jewish political observers disagree with the notion that Warnock is not a strong supporter of Israel.

“I do not think that Warnock has a proven track record of being anti-Israel,” said Sam Olens, a Jewish Republican and the former Attorney General of Georgia. “Warnock is very active with social justice issues, but that doesn’t mean he is anti-Israel at all.”

And some observers believe Israel may be a moot point in this election anyway, because each candidate is seen by their supporters as being pro-Israel.

“It’s a blessing that all four candidates are strong on Israel,” said Berg. “It’s a testament to what they stand for and to the Jewish community in Georgia, which has nurtured those relationships.”

Georgia’s election-weary Jewish community is ready for another fight