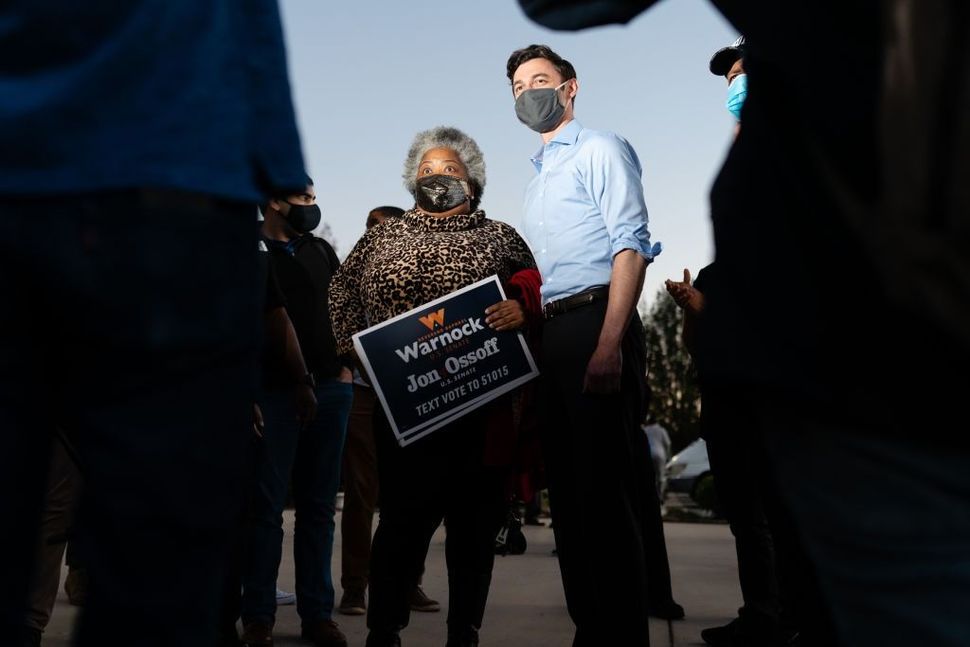 When Rev. Gerald Durley was preparing his endorsements for the 2020 general election in Georgia, he knew U.S. Senate candidate and fellow Black pastor Raphael Warnock would have a place at the top. Durley once served at the historic Ebenezer Baptist Church in Atlanta where Warnock is now senior pastor and the two have been in touch throughout the campaign.

In contrast, Durley barely knows Jon Ossoff, the Jewish film producer running alongside Warnock again in the Jan. 5 run-off election that will determine control of the U.S. Senate.

“Warnock has been out on the front lines of marches and standing up for gun control and affordable health care for years — Ossoff has not been there,” Durley said. “If somebody said, ‘What’s the name of his company?’ I wouldn’t have any idea.”

But the 33-year-old Georgia native still received top billing on Durley’s endorsement list, which he said was circulated statewide by officially nonpartisan organizations like the NAACP and Urban League.

The alliance between Atlanta’s white Jewish community and its Black residents is now helping both Warnock and Ossoff mobilize voters and fend off blistering GOP attacks as the two seek to unseat Trump-friendly conservative Sens. David Perdue and Kelly Loeffler and hand unified control of the legislative branch to President-elect Joe Biden.

“You have a strong coalition between the Jewish and Black community here which has activated around politics for decades,” said Lindy Miller, a Jewish businesswoman active in local Democratic circles. “That has only increased in proportion to how regular civic engagement has increased over the last several years.”

Experts say that most voters in Georgia have already decided who to vote for in January, meaning the result will hinge on which side can bring the most people to the polls and avoid any scandals that could derail their campaigns.

But with Biden winning Georgia by fewer than 13,000 votes, drawing even a few of the small number of swing voters, or convincing Democrats to turn against either Ossoff or Warnock, could determine the results. Republicans need to pick up only one of the two seats in order to hold control of the Senate, but Democrats need to win both.

Ossoff and Warnock have been holding joint campaign events. Part of Warnock’s stump speech includes reference to his background growing up in the public housing projects of Savannah and Ossoff’s experience growing up as the child of Jewish immigrants.

Democrats in the white Jewish and Black communities across Georgia emphasize that they are not supporting Ossoff and Warnock due to their race or religion. Yet observers also agree that the identity of the two Democratic candidates has shaped the race, from the attacks on Warnock to accusations that Ossoff is an untrustworthy socialist and, as Newt Gingrich claimed on Fox News recently, “a product of Hollywood and Silicon Valley.”

“It’s not like we don’t know that we have a Black candidate and a Jewish candidate, but I guess the GOP wants to make sure we know,” said Valerie Habif, who runs the Jewish Democratic Women’s Salon, Atlanta.

The Perdue and Loeffler campaigns did not respond to requests for comment about their campaign strategies.

The race has also been influenced by the relationship between Atlanta’s Black churches and largely white synagogues, which goes to the birth of the Civil Rights Movement. Martin Luther King Jr., who led the same church Warnock now does, was close to Rabbi Jacob Rothschild of The Temple, an iconic Atlanta synagogue.

Sherry Frank, former director of the American Jewish Committee’s Atlanta office, and others in the Jewish community mobilized in 1972 to help elect King’s confidant, Andy Young, to Congress. She said the two groups have closely collaborated in the years since, through both formal committees and personal friendship like the ones she maintained with Coretta Scott King and former Rep. John Lewis, who died in July.

Durley said he has traveled to Israel several times with Jewish clergy and like Frank has worked on campaigns across religious lines since the 1970s.

“That kind of legacy lays the foundation for what we do today as Jon Ossoff and Raphael are campaigning,” Durley said. “Now when some of the more thorny political issues come up we can look at them from a different perspective.”

For Warnock, Israel has been one of those politically thorny issues. After past sermons emerged in which Warnock criticized the Israeli occupation and praised Palestinian protesters, opponents began to claim that he did not support the U.S.-Israel relationship.

Ossoff’s status as a Jewish candidate helped Warnock defuse the issue, said Audrey A. Haynes, a political scientist at the University of Georgia.

Indeed, Ossoff himself came out swinging on Warnock’s behalf.

“Reverend Warnock is a beloved friend and ally of Georgia’s Jewish community and a friend of Israel,” Ossoff said in a statement to the Forward last week. “Kelly Loeffler’s baseless attacks on the Reverend make me sick.”

“It’s a baseless, absurd attempt to try and create division in the Jewish community on an issue that — from the outside — is deemed to be the most critical issue,” she said. “But I can tell you that Jewish Georgians care about all the same things that every other voter cares about.”

The Republican Jewish Coalition said that it has made thousands of Jewish voter contacts in Georgia to support the Republican candidates and executive director Matt Brooks has defended criticism of Warnock’s positions on Israel as fair game.

Brooks cited several of Warnock’s comments, including his use of the phrase “birds of prey” to refer to the manner in which Israeli soldiers shot Palestinian protesters.

“How can you defend that and try to convince the Jewish community he’s a good guy,” Brooks wrote on Twitter to Rabbi Jill Jacobs, executive director of T’ruah and a Warnock supporter.

But so far the attacks on Warnock, which are largely drawn from videos of sermons he delivered at Ebenezer Baptist, appear to have fallen flat within the Jewish community.

“The Republicans would like to think they have another Rev. Wright circa 2008 and the Obama campaign but they don’t,” said Steve Berman, an Atlanta developer and Democratic donor, referring to a controversial relationship that dogged Obama’s race. “Warnock’s positions are clear.”

Black clergy have also been crucial in lifting Ossoff.

“The Black church is an institution that speaks out much stronger and is much more politically partisan than any synagogue,” said Frank, who used to direct the American Jewish Committee’s Atlanta office.

She recalled attending meetings where church leaders discussed who to endorse, as Durley did, and announced how many buses they would provide to bring voters to the polls.

The association with Wanock and his progressive bona fides might also enhance Ossoff’s reputation with voters who lean to the left.

“Warnock may appeal to Black voters who are more progressive or who are relatively nonpolitical but understand that this is a historic moment in Georgia,” said Haynes in an email. “Ossoff would likely benefit from the direct appeal of Warnock to his supporters of color.”

Likewise, it seems likely that Black voters who know Warnock from his extensive civic engagement efforts but are less familiar with Ossoff will vote for the duo in January.

“All the people in the African American community are staunch Ossoff supporters all the way,” said Durley. “There’s no way that someone would vote for Warnock and not vote for Ossoff — impossible.”

Despite the benefits that both Ossoff and Warnock derive from the Jewish and Black Christian communities, the Democrats still face an uphill battle in the runoff. Biden received roughly 100,000 more votes than Democrats did in the two Senate races during the general election. And Democrats have a history of forcing runoffs only to lose by enormous margins.

In an eerily similar 2008 contest, Democrat Jim Martin ran three points behind Republican Saxby Chambliss in the general election but lost by nearly 15 points in the runoff. Martin’s loss denied Democrats a filibuster-proof majority in the Senate.

But Democrats are hopeful this year may be different.

“You’ve got to get your voters out and obviously Democrats have a weak record of doing that,” Berman said. “But having said that, this is Stacey Abrams’ Georgia now.”

Abrams, who lost a contested election for governor in 2018, is credited with registering scores of new voters in the last two years and for helping push Biden over the edge in Georgia. She also has ties to the local Jewish community, including frequent appearances at the Jewish women’s group.

The Jewish Democratic Council of America, National Council of Jewish Women, Bend the Arc and other liberal Jewish groups have also turned their attention to Georgia either directly campaigning for Warnock and Ossoff or supporting the technically non-partisan work Abrams is doing to register and turnout voters.

Haynes said Democrats appear to have an edge in organizing as the election nears and infighting continues to plague the Republican side.

“Canvassing, messaging, ballot requests, registration — Democrats are volunteering left and right,” Haynes said. “But here in Georgia, the Republicans are calling each other RINO and Trumplican, and a lot of other things.”

And whether or not the close ties between the Black and Jewish communities moves the needle in the Senate, longtime political watchers like Frank still marvel at the circumstances.

“It’s just amazing that the possibility for a Democratic the majority in the Senate rests on a Black and a Jew,” she said. “I don’t think anyone could have dreamed up this kind of weird alignment.”