Why is Raphael Warnock’s Israel stance suddenly an issue in his Georgia Senate campaign? 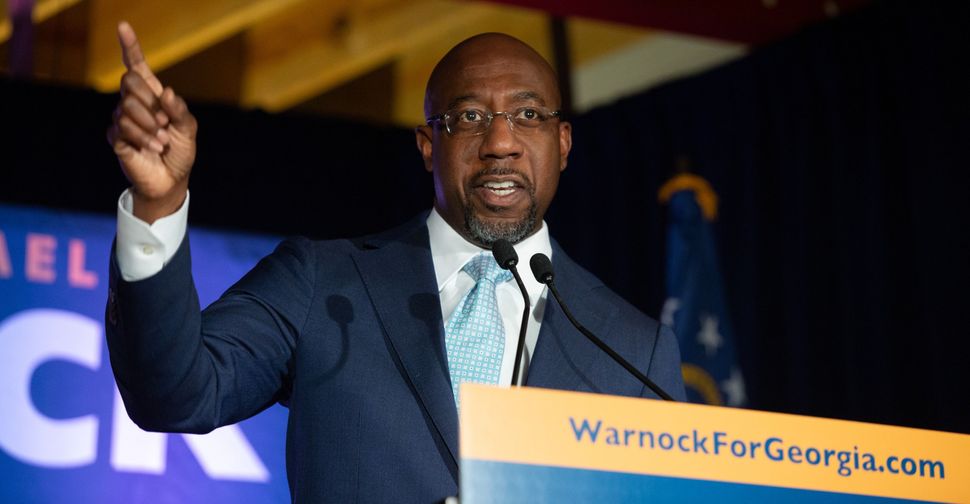 The Israel positions of the Democratic candidate in one of Georgia’s two Senate runoffs came under scrutiny in the past week from both media organizations and his opponent despite his strong ties to the city’s Jewish community.

Rev. Raphael Warnock leads the Ebenezer Baptist Church in Atlanta, the pulpit from which Rev. Dr. Martin Luther King, Jr. preached. He’s worked with the city’s Jewish community in both clergy exchanges and interfaith programs, and is running against Sen. Kelly Loeffler, a Republican.

Several Jewish leaders who spoke to the Forward for a recent story about Georgia’s Jews and the runoffs scoffed at the notion that Warnock is not a friend to the Jewish state.

“He’s publicly praised the memorandum of understanding, he’s strongly against BDS, and he’s talked about what it would be like to have a stronger alliance between the state of Georgia and Israel,” said Rabbi Peter Berg, leader of the large Reform synagogue The Temple, and a close personal friend of Warnock’s.

Warnock’s and Loeffler’s campaigns did not immediately respond to requests for comment.

Here’s a quick look at why Warnock’s views on Israel are being questioned:

On Nov. 5, Jewish Insider published an article headlined “Raphael Warnock signed letter likening West Bank to apartheid South Africa.” The article refers to a statement that Warnock signed, along with a group of Black and South African Christian clergy, after the group toured Israel and the West Bank in 2019.

The statement expresses the group’s support for a two-state solution to the Israeli-Palestinian conflict, and says that the group toured Yad Vashem, Israel’s Holocaust museum and memorial, and visited a refugee camp. According to the letter, the group learned about living conditions in the Gaza Strip and the occupied West Bank and participated in a bible study with a rabbi.

The statement is highly critical of Israel’s military occupation and of settlement expansion in the West Bank, which it said served to “render the proposed two-state solution unworkable.”

But its comparison between Israel and apartheid South Africa — an equivalence rejected by nearly all American Jewish groups — is more nuanced that the one suggested in Jewish Insider’s headline.

In a section listing “patterns that seem to have been borrowed and perfected from other previous oppressive regimes,” the statement includes “The heavy militarization of the West Bank, reminiscent of the military occupation of Namibia by apartheid South Africa.” (South Africa held Namibia under military control from 1915 through 1990, an occupation deemed illegal by the United Nations.) Jewish Insider quotes this section of the clergy’s statement in the ninth paragraph of its story.

The Jewish Insider report was later aggregated in news outlets on both the right, like Fox News and the Free Beacon, and the left, like Mondoweiss. Jewish Insider’s publisher and managing editor did not immediately respond to requests for comment.

On Monday evening, Loeffler tweeted out one of those articles, also claiming without evidence that Warnock had defended the Chicago pastor “Jeremiah Wright’s anti-Semitic comments.” (Warnock defended Wright in 2008 amid a media frenzy over Wright’s sermons about American injustice. Wright has since made antisemitic comments.)

.@ReverendWarnock has a long history of anti-Israel extremism. He defended Jeremiah Wright’s anti-Semitic comments. He embraced the anti-Zionist BLM organization. And he thinks Israel is an “oppressive regime” for fighting back against terrorism. https://t.co/QuuoqU9tIT #gapol

What has Warnock said about Israel in the past?

Berg and other Atlanta Jewish leaders rejected the notion that Warnock has a “long history of anti-Israel extremism,” or that he supports the views on Israel expressed in the 2016 platform of the group the Movement for Black Lives, as suggested in Loeffler’s tweet. (The Movement for Black Lives has since dropped its controversial Israel language.)

“He’s an African-American preacher. Clearly he’s gonna be immersed in a lot of Black Lives Matter issues, but that doesn’t mean he supports that one little document of that small original group,” said Sam Olens, the Jewish Republican former Attorney General of Georgia.

Warnock has not shied away from strong criticism of Israel’s military occupation.

Jewish Insider on Monday published an article about a 2018 sermon in which Warnock accused Israel of shooting unarmed Palestinian protesters. (A United Nations investigation later found reasonable grounds for accusations that Israeli snipers had shot at Gazan children and people identified as journalists. Israel contested the report’s findings.) Warnock added in the sermon that he supports a two-state solution.

In a position paper outlining his views on Israel, Warnock quotes MLK: “Israel’s right to exist as a state in security is incontestable.”

“I understand and recognize Israel’s unique historical importance as the greatest proponent of democracy in the Middle East and America’s most important ally in the region,” the six-page paper continues.

The paper also states Warnock’s opposition to the boycotts, divestment and sanctions movement, and what he calls the movement’s “anti-Semitic overtones.” Warnock states his support for military aid to Israel, and his “alarm” at President Donald Trump’s withdrawal from the Iran nuclear agreement — a move which Warnock characterized as “incentivizing Iran to return to their pursuit of the bomb.”

Warnock’s campaign reiterated some of those statements in a comment to Jewish Insider for its article on the Christian clergy statement: “The reservations he has expressed about settlement activity do not change his strong support for Israel and belief in its security — which is exactly why he opposes ending direct military aid to such a strong ally,” the statement read.

Why is Raphael Warnock’s Israel stance suddenly an issue in his Georgia Senate campaign?