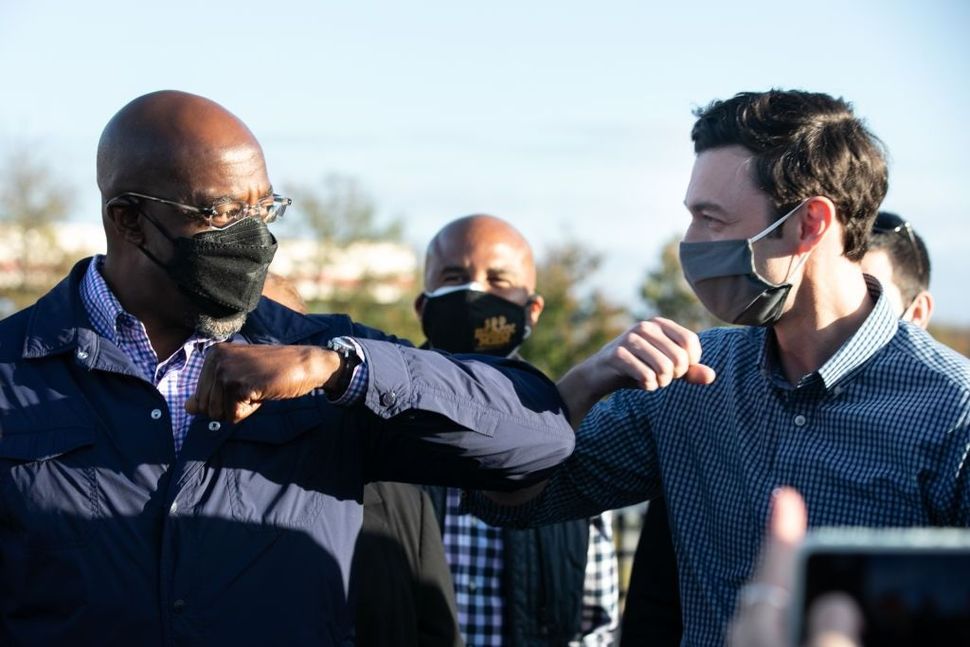 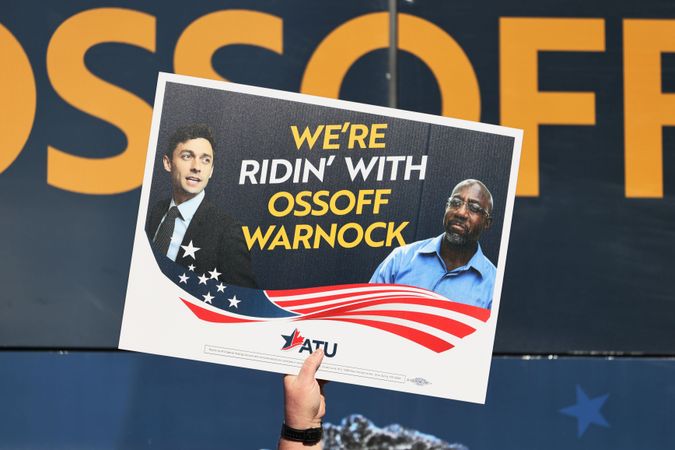 Democrats appeared on the cusp of taking control of Congress early Wednesday morning, as the Rev. Raphael Warnock defeated Republican incumbent Kelly Loeffler in one of two Georgia Senate runoffs and Jon Ossoff was locked in a narrow race again incumbent David Perdue in the other.

If he prevails, Ossoff will become the first Jewish Senator from the Deep South since the 19th century — and Sen. Chuck Schumer of New York likely the first Jewish Majority Leader of the Senate.

“I think we’re going to be very pleasantly surprised,” said Lindy Miller, a Democrat who lost her own Georgia runoff in 2018 and was watching the returns come in Tuesday evening.

Democrats need to win both seats in order to control the Senate with 50 seats and Vice President-elect Kamala Harris serving as the tie-breaking vote.

The contest between Ossoff and Perdue has been on the radar of Jewish politicos at least since the summer, when the Republican incumbent was forced to delete an online advertisement in which Ossoff’s nose had been enlarged.

But that one-off incident of alleged antisemitism paled in comparison to the vitriolic campaign that began after no candidate in either race secured the 50% necessary in the November general election to avoid Tuesday’s runoff.

Loeffler and her conservative allies quickly seized on a clip of Warnock describing Israeli soldiers as “birds of prey” in a sermon condemning violence against Palestinian protesters three years ago. Republicans paired that with a letter Warnock had signed after a trip to Israel and the occupied West Bank that referenced apartheid.

While his Jewish allies sought to contextualize the letters and sermon, Warnock dropped the critical stance toward Israel and went all-in on his support for the Jewish state. He came out opposed to conditioning military aid to Israel, said the apartheid analogy was false, and touted his attendance at AIPAC conferences.

But critics said he failed to confront his past statements directly, by explaining what he meant at the time, and cited other controversial sermons and alleged misconduct at church-based programs he had overseen.

“This person is a problem and despite his election-eve conversion and his assurances to the contrary he’s got a long-standing record that raises legitimate questions and serious concerns about what he will do and say if he’s elected to the U.S. Senate,” said Matt Brooks, executive director of the Republican Jewish Coalition, which invested heavily in the runoff.

Put on the defensive early, Warnock and Ossoff pivoted, with an assist from liberal Jewish groups, to painting Loeffler as the true bigot. They cited her endorsement of far-right Congresswoman-elect Marjorie Taylor Greene, who promoted the antisemitic QAnon conspiracy theory during her campaign, and the photos Loeffler took with white supremacists at two campaign events. Loeffler said she did not know the men and condemned their views after the photos emerged. 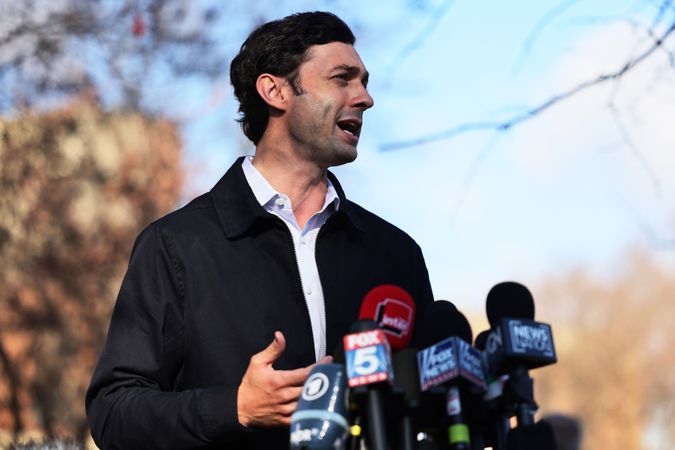 Outside of the summer advertisement, Perdue largely stayed out of the crossfire between Loeffler, Warnock and Ossoff over direct claims of white supremacy and antisemitism, though he fueled the narrative that the Democratic candidates were closet radicals seeking to destroy America.

Jewish groups helping the Democrats didn’t go after Perdue in the same way as they attacked Loeffler, though Dove Kent, strategic director for Bend the Arc, was loath to give him much credit for not being pictured with white supremacists.

“We have not seen the kind of connections, at least visibly, that Loeffler has,” Kent said. “But frankly the amount of connections and ties that Loffler has made to white supremacist individuals and groups is so much greater than any elected official should have.”

Experts agreed there weren’t many Georgians waiting to make up their mind about which candidates to vote for. Instead, the roughly $830 million spent on the runoff — and the periodic focus on Israel — was largely meant to turnout each side’s supporters.

Charles S. Bullock III, a political science professor at the University of Georgia, said the GOP focus on Israel in the race had far more to do with motivating white evangelicals than trying to win over Jews. 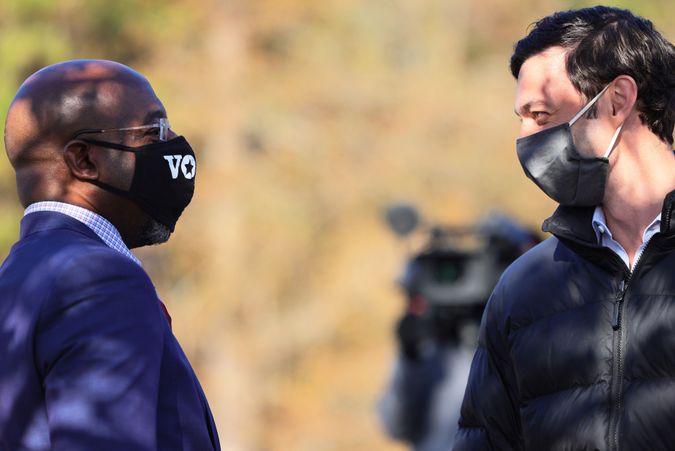 The results capped an unprecedented 2020 campaign season in which President Donald Trump was defeated by former Vice President Joe Biden while Republicans held onto nearly all Senate seats in battleground states and made gains in the House. Trump has refused to recognize the election results and dozens of Republicans in Congress have backed his false claims of voter fraud.

Republican infighting over how strongly to back Trump dominated the final days of the Senate races, with the president pressuring Georgia’s secretary of state to overturn Biden’s victory in the state. Perdue and Loeffler sought to hold onto Trump’s base and the energy he generated while gliding over the president’s own claims that Georgia’s election system was rigged and the runoff contest illegitimate.

If Ossoff wins his race, Biden will have a friendly majority in both chambers of Congress for at least the first two years of his presidency, before the 2022 midterms put both chambers of Congress back up for grabs. However, despite claims by Perdue and Loeffler that Democratic control of the Senate would mean unfettered radicalism, if Democrats win both races much is likely to ride on the votes of moderates like Sen. Joe Manchin of West Virginia.

But the strong showing for Democrats, regardless of final results, has also energized Miller and the other liberal Jewish activists who mobilized to get Warnock and Ossoff elected.

“We knew that this could happen,” Miller said. “Democrats left nothing on the field today. Nothing.”