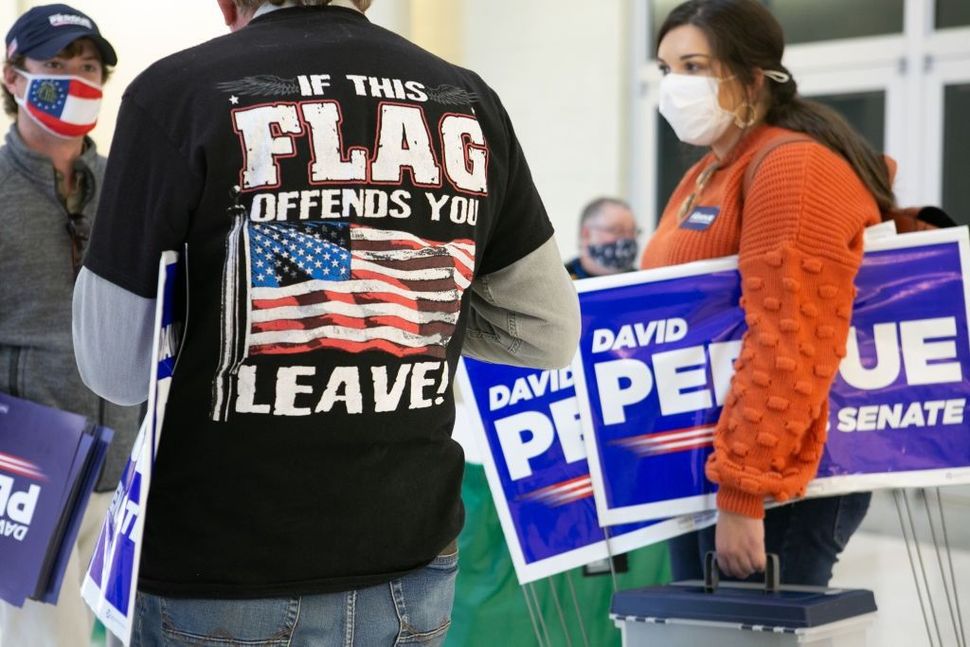 After weeks of Republican attacks against Democrat Rev. Raphael Warnock’s record on Israel, progressive groups are pushing back by pointing to what they say are Sen. Kelly Loeffler’s ties to white supremacists.

Loeffler, a Republican, turned her attention to Warnock shortly after the November election, in which neither candidate passed the 50% threshold required to avoid a runoff in Georgia. Since then, she has released a steady stream of allegations that Warnock does not support Israel and is associated with a host of right-wing boogeymen like Fidel Castro and Louis Farrakhan.

Jewish leaders in Atlanta, where Warnock is pastor of a major Black church, rallied to his defense last month. Now, as a photo of Loeffler and a Ku Klux Klan leader emerged last week, his Jewish allies are launching a concerted counterattack, albeit one that is struggling to gain traction against Loeffler’s onslaught.

“Kelly Loeffler has claimed to speak for our Jewish community while actually empowering those who would do us harm,” said Dove Kent, strategic director for Bend the Arc.

Bend the Arc and IfNotNow, another progressive Jewish organization, circulated the photo of Loeffler posing with white supremacist Chester Doles at a campaign event on and in press statements. Doles is a former Ku Klux Klan leader and avowed neo-Nazi who was imprisoned in 1993 for the beating of a Black man in Maryland.

The Loeffler campaign condemned Doles and said she did not know who he was when the photo was taken. But her ties to white supremacists are deeper than a single photo, Kent said, pointing to another photo in which Loeffler posed with another member of Doles’ current group.

Loeffler also gave an interview in July to Jack Posobiec, a far-right activist who has close ties to white supremacists. And Kent said Loeffler’s endorsement of right-right conspiracy theorist Marjorie Taylor Greene, who was elected to a U.S. House seat in Georgia in November, was more evidence of her far-right leanings.

“Loeffler has clearly made tying herself to extremists part of her electoral strategy,” Kent said. “This is not just a one off photograph or a two-off photograph.”

Loeffler’s campaign did not respond to a request for comment. But Matt Brooks, director of the Republican Jewish Coalition, said that she had quickly condemned white supremacists while Warnock has not explained his own alleged ties to controversial figures.

“Kelly Loeffler has taken the aggressive position of distancing herself from bad actors,” Brooks said. “Reverend Warnock has not.”

Republicans have sought to tie Warnock to Castro, the former president of Cuba, and Nation of Islam leader Farrakhan, as well as controversial Chicago pastor Jeremiah Wright.

Castro spoke at a New York church where Warnock was a youth pastor in 1995, though Warnock said he never met Castro. He did praise Wright, but PolitiFact found that Loeffler’s claims about his relationship with Barack Obama’s former pastor were misleading.

And this week, Fox News published an article stating that Warnock “praised Farrakhan’s Nation of Islam” in a 2013 speech. They cited a video in which Warnock fielded an audience question about Black churches’ relationship with the Nation of Islam and Black Muslims.

Warnock said the Nation of Islam was important to the historic development of Black theology because it challenged Black Christian preachers “to keep us honest about the meaning of the proclamation coming from our pulpit.” He did not mention Farrakhan.

Despite pushback from the left, the claims about Warnock have become ubiquitous in the television ads flooding Peach State airwaves.

Bullock said revelations of Loeffler’s associations with far-right figures have been covered by the media but have not featured prominently in Warnock’s campaigning so far.

“None of that has shown up in any of the ads run against her,” he said.

Warnock is the only candidate in the double runoff, which also features Democrat and Jewish media executive Jon Ossoff in a race against Republican Sen. David Perdue, who has remained almost entirely positive in his campaign advertising.

“He’s maybe decided to hope that some share of voters are tired of the nastiness and attack ads,” Bullock said.

In one Warnock ad that features a puppy, he drops a doggie bag into a trash can while saying of Loeffler, “I think Georgians will see her ads for what they are.”

The Jewish Democratic Council of America has also stayed upbeat in its work on the runoff, which has focused on promoting Warnock’s close ties to the Jewish community.

“The Republican Jewish Coalition spends all its time vilifying the Democratic candidate and say very little about their own candidates,” Halie Soifer, the group’s CEO, said. “That’s just not our approach. We know voters want to hear why they should support candidates.”

One recent ad from the Jewish Democratic Council of America offers an implicit rebuke of claims that Warnock is hostile to the Jewish community; it features Warnock praising historic collaborations between Black and Jewish civil rights leaders.

Brooks, for his part, doesn’t think the renewed emphasis on Loeffler’s alleged ties to the far right are legitimate — or a result of the steady stream of attacks on Warnock.

“This is a campaign,” Brooks said, “and campaigns use whatever opposition research they have on the other.”

News reporter Arno Rosenfeld can be reached at [email protected]