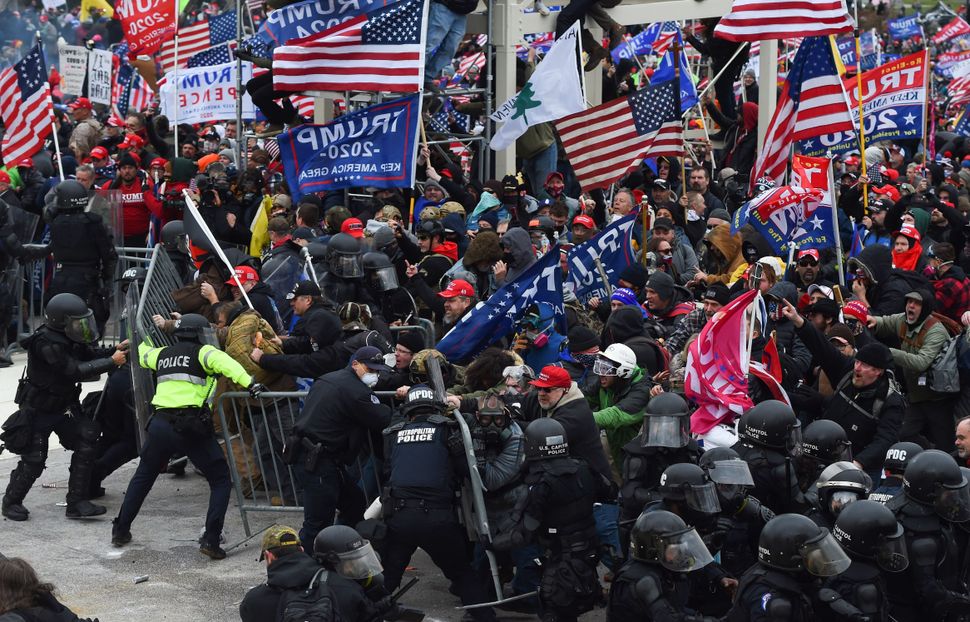 Trump supporters clash with police and security forces as they push barricades to storm the US Capitol in Washington D.C on January 6, 2021. Image by Getty Images

The Anti-Defamation League’s call for President Donald Trump to be removed from office is not likely to lead to that result. But it is nonetheless a significant event: the first major, mainstream American Jewish organization to take such a stand, and an unprecedented one for the 108-year-old organization.

Jonathan Greenblatt, the group’s chief executive officer, told me in a phone interview Sunday that he knows the president is not likely paying attention to the ADL’s news releases. But as one of the nation’s leaders on tracking and fighting white supremacy, he said, the ADL had to make the strongest possible statement after Wednesday’s assault on the Capitol.

“The idea that a sitting president could incite a terror attack on the American government, there is no precedent for that,” said Greenblatt. “It is indisputable that the responsibility lies right at his feet.”

Smaller, left-leaning Jewish groups unanimously condemned the president and called for his resignation or impeachment, but so far no major Jewish organization has done so except for the ADL.

The goal of the statement, he said, isn’t to oust a president who will soon be an ex-president anyway. It’s to stop the rise of the racist, antisemitic terrorist groups whom the president sicced on Congress.

“This presidency will be bookended from Charlottesville to Capitol Hill” is how Greenblatt put it in our call. 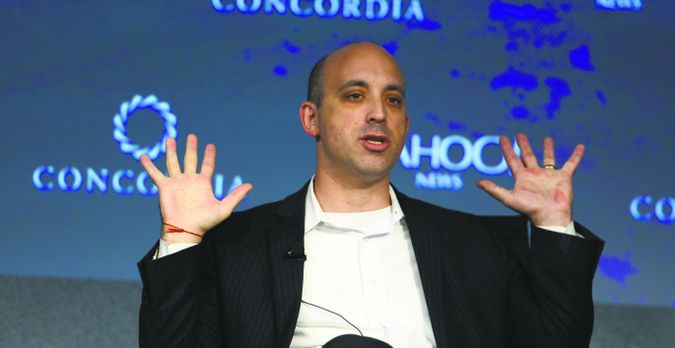 About 200 white supremacists marched with their tiki torches and white-power signs at the 2017 “Unite the Right” rally in Charlottesville that killed a counterprotester. Some estimates suggest as many as 20,000 people joined last week’s “Stop the Steal” rallies in Washington, D.C., that led to the invasion of the Capitol building and temporary disruption of Congressional certification of November’s election results.

“They had maps to the offices and zip ties for handcuffs,” Greenblatt said of the insurrectionists. “They knew what they were doing, these were highly trained people.”

Chillingly, he said he does not believe the attack would have been as successful if highly-placed officials did not in some way help.

“These guys had to have gotten a midnight tour from someone,” he said.

After a terrifying Wednesday afternoon, Congress managed to carry out its duty to formally declare Joe Biden would become the 46th president of the United States hours after the violent mob was removed from the Capitol. The FBI and local police have made some arrests. Twitter has permanently banned Trump from its platform. And the internet is full of memes like the one of an intruder’s head mounted on Speaker of the House Nancy Pelosi’s office wall.

But it would be naive to believe the good guys have won. Greenblatt and others who have been monitoring the post-riot internet chatter among the far-right want to cut short any victory laps.

“White supremacists think of what happened as a watershed moment,” he said. “They are already planning for the next one.”

That’s because, as Timothy Snyder wrote in The New York Times Magazine this weekend, lies outlive liars. The Big Lie that Germany lost World War I because of the Jews was 15 years old by the time Hitler took power.

After German democracy beat back the 1923 Beer Hall Putsch, the hooligans, energized by what they perceived as their watershed, reorganized, recruited, and reemerged in 1938 to take over the country.

“How will Trump’s myth of victimhood function in American life 15 years from now?” Snyder asked in the article. “And to whose benefit?”

The question, and the parallels, are not so far-fetched. In a powerful video message uploaded to Twitter, former California Gov. Arnold Schwarzenegger called what happened at the Capitol “an American Kristallnacht.” Schwarzenegger, who immigrated to the United States from Austria in 1968, warned that he witnessed firsthand the aftermath of what happens when people believe in lies—a democracy destroyed, a ghost of a country filled with broken people, like his own father.

How do we stop it, I asked Greenblatt. Trump will exit center stage, but there are new, younger and smarter opportunists in the wings, like Republican Sens. Josh Hawley of Missouri and Ted Cruz of Texas. Twitter can block people and Amazon can thwart fringier platforms like Parler, but sites like Gab and 4Chan inevitably pop up in their place, an endless game of Whack-a-Crazy-Mole.

The task of preventing that will require government, news organizations and civil society to work together, Greenblatt said. The Departments of Justice, Homeland Security and State have to make domestic terror a priority and work in cooperation with state and local law enforcement. The Departments of Health and Human Services and Education need to work on deradicalization, offering alternatives to the dead-end belief systems online.

Social-media companies have to be held accountable. The ADL and the Stop Online Hate coalition will continue to pressure tech platforms, app stores, credit-card processors and cybersecurity companies that turn hate into viable businesses. None of this eradicates hate groups, but it can re-marginalize them.

I reminded Greenblatt that four years ago, after Trump’s election, he had said at an L.A. forum that although the ADL had criticized Trump during the campaign, he was willing to approach the president with an open mind.

“Donald Trump comes to the job with a more intimate relationship with the Jewish people than any of his predecessors,” he reminded the audience.

Greenblatt was as stumped as I am at how a man with Jewish grandchildren can look out at a sea of Confederate flags, white-supremacist insignia and “Camp Auschwitz” T-shirts and say, “I love you. You are very special to me.”

And what of the Jews who still support him, I asked. When Rabbi Adam Kligfeld of Temple Beth Am, a Conservative synagogue on the West Side of Los Angeles, praised Senate Majority Leader Mitch McConnell for standing up to Trump on his Facebook page, several commenters rushed to Trump’s defense because of what he did for Israel.

“I get that,” said Greenblatt, who said he received a lot of angry emails and tweets from Jews after the ADL’s call for Trump to be removed.