Sheldon Adelson leaves behind a Jewish philanthropic empire. What’s next? 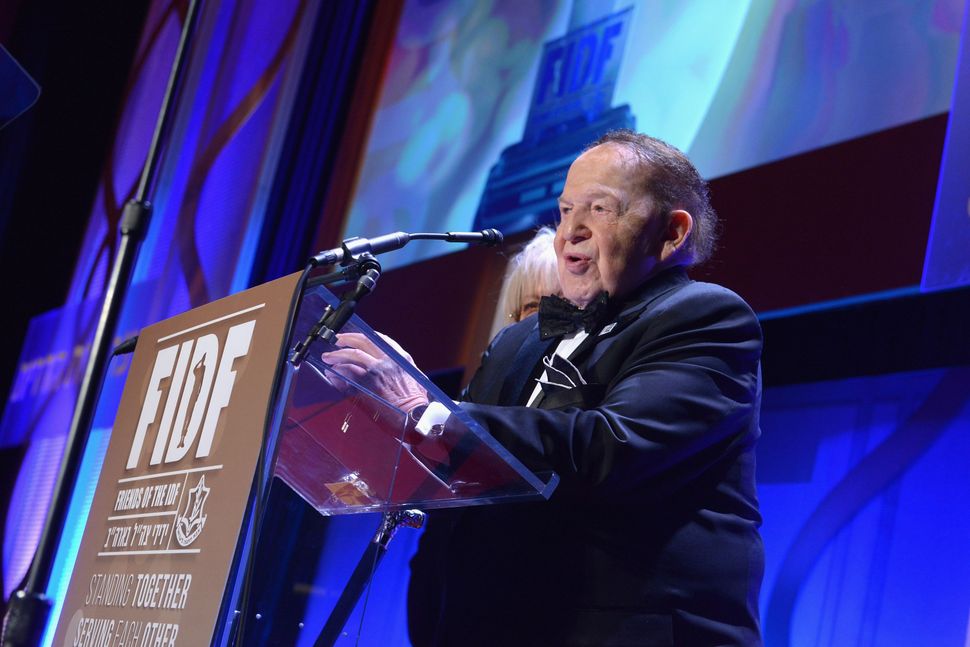 Dr. Miri Adelson and Sheldon Adelson address the 2016 Friends Of The Israel Defense Forces Gala at The Waldorf Astoria on March 15, 2016 in New York City. Photo by Shahar Azran/Getty Images

Love him or hate him, Sheldon Adelson’s impact on the Jewish nonprofit world cannot be overstated.

Adelson, the casino magnate who died Tuesday at 87 of non-Hodgkin’s lymphoma, is best known as the top political contributor in the country, donating more than $218 million to Republican campaigns in the 2020 election cycle alone. But he and his wife, Miriam, also have sent thousands of young Jews to Israel through Birthright; helped make Benjamin Netanyahu the longest-serving leader in Israeli history; built a solid foundation for Yad Vashem and shifted the American-Jewish conversation — and Israeli domestic politics — steadily rightward through their support of pro-Israel organizations and campus initiatives.

Through their main philanthropic funnel, the Adelson Family Foundation, the couple has written checks small and large to Jewish organizations including Congregation Ner Tamid in Nevada ($750 in 2019) and the Maccabee Task Force Foundation ($15,336,449 that same year). The 2019 filing contains donations to 80 different charities, almost all associated with Israel or Judaism.

And their philanthropy extends far beyond the Jewish sphere. The Adelsons, whose fortune stems from a casino empire headquartered in Las Vegas, also funded the Adelson Medical Research Foundation, which gave nearly $38 million in 2018, according to the most recent annual filing available online, to causes like the Boston Children’s Hospital Trust, Dana Farber Cancer Institute, the John Wayne Cancer Center and universities in Israel and the United States. (Miriam Adelson is a doctor.)

Through yet another nonprofit, Adelson, whose son Mitchell died of a drug overdose in 2005, also quietly funded a drug treatment and rehabilitation facility for opioid-addicted patients.

While he was known for his seven- and eight-figure contributions, the majority of donations in Adelson’s nonprofit’s most recent filing were in the five- or six-figures and went to some lesser-known organizations. The Chelsea Nursing Home in Massachusetts, for example, was given $200,000. Friends of Israel Scouts got $650,000. Gideon Hausner Jewish Day School in Palo Alto received $333,333 and the Israel Guide Dog Center for the Blind, $36,000.

The occasional gift in the hundreds of dollars illustrates a phenomenon that people close to Adelson describe: This was a man without much interest in soliciting applications or RFPs. Instead, he donated to causes he liked or heard about from friends and family.

His confidants say that’s not likely to change.

“Sheldon worked on instincts quite a bit,” said Barry Shrage, the former president of Combined Jewish Philanthropies in Boston, where Adelson grew up the son of a cab driver, and continued to spread wealth throughout his lifetime. “I think Miri will continue that.”

Dr. Miriam Adelson, Sheldon’s second wife, was born in Israel and drove her husband’s philanthropic and political focus even more narrowly toward Israel after their marriage in 1991. For their wedding, the Adelsons shipped 150 of their closest friends to Israel on a private plane and hosted a reception in the Knesset’s Chagall State Hall.

The Adelsons’ fundamentalist commitment to Israel has earned them ever-more conservative bedfellows, some that might have never risen to the public consciousness without their financial support. Long-gone is the cozy relationship between Adelson and the American Israel Public Affairs Committee — in 2007, Adelson broke with AIPAC for supporting increased American funding to Palestinians.

Instead, the casino mogul linked up with the Israeli-American Council, founded in part by Adam Milstein, who notoriously said without evidence, in 2019, that Rep. Ilhan Omar of Minnesota and Rep. Rashida Tlaib of Michigan were “representatives” of the Muslim Brotherhood. Adelson also donated generously — at least $1.8 million over four years — to the Zionist Organization of America, led by Morton Klein, who has been accused of Islamophobia, and who called Black Lives Matter an “antisemitic, Israel-hating, Soros-funded” hate group.

Adelson occupied a seemingly unique throne at the intersection of Zionism, Jewish Jewish philanthropy and Republican campaigns. While those worlds expect donations to keep coming in comparable amounts and to the same causes under Miriam, the exit of such a strong character does leave an opening for others in similar realms to increase their prominence and power.

One is the investor Paul Singer, who supported Marco Rubio during the 2016 Republican presidential primary and who donated $1 million to a political action committee attempting to snuff out then-candidate Donald Trump’s campaign. If the Republican Party turns back to the center, Singer’s vocal opposition to the Iran nuclear deal and his organization devoted to supporting Israeli start-ups could give him runway to vie for the Adelson crown.

Seth Klarman, another billionaire investor, donated $2.9 million to Republicans in 2016, but has since made seven-figure contributions to Democratic PACs. While Klarman is to the left of Adelson, there are some parallels — including investment in the media.

Klarman co-founded and largely financed the Times of Israel website in 2012 — five years after the Adelson-backed Israel Hayom disrupted Israel’s news landscape by distributing free what was often seen as a mouthpiece for Netanyahu’s political agenda. The Times of Israel, run by the widely respected editor David Horovitz, has grown to be perhaps the largest and best-read English news source of Israeli news, and also hosts several North American Jewish news websites.

In any case, Adelson’s staunch conservatism and laser-like focus on Israel made him unique and possibly irreplaceable among Republican Jews, as did his personal legend.

Raised in poverty in the ragtag Dorchester neighborhood of Boston, Adelson told Shrage, the longtime Boston federation head, that he was inspired to become a philanthropist after a Jewish neighbor paid for him to attend summer camp.

And perhaps that pearl of an opportunity helped drive Adelson to what sometimes looked like desperation in defense of Israel.

“Having all that money made him feel life-or-death responsible for the fate of the Jewish people,” Shrage said.

Sheldon Adelson leaves behind a Jewish philanthropic empire. What’s next?