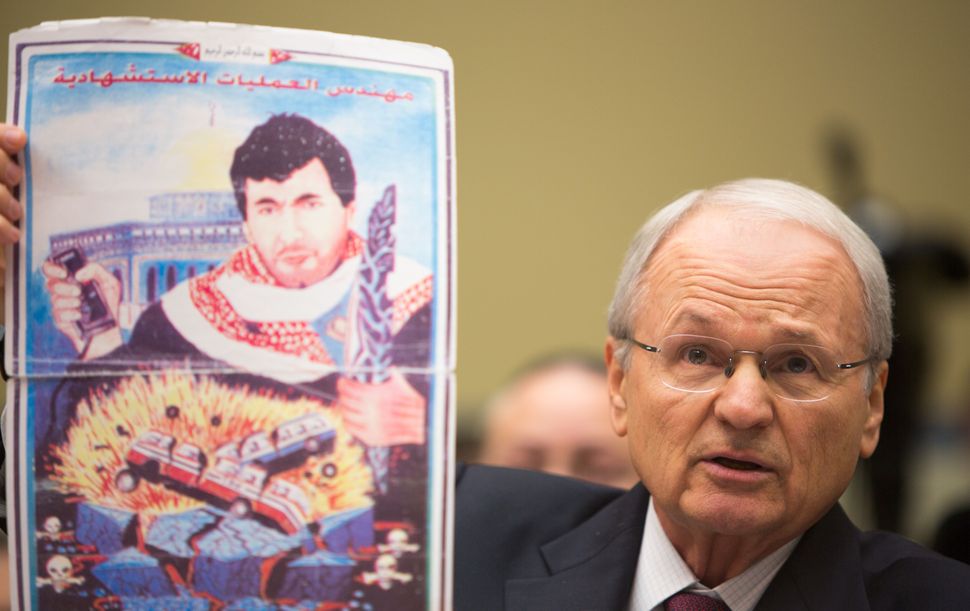 WASHINGTON, DC – NOVEMBER 08: Morton Klein of Zionist Organization of America attends a hearing at the National Oversight and Government Reform Committee on moving the U.S. Embassy in Israel to Jerusalem on Capitol Hill on November 8, 2017 in Washington, DC. (Photo by Tasos Katopodis/Getty Images) Image by Getty Images

Louis Brandeis, the first Jew to be confirmed as a Supreme Court justice, embodied the image of the liberal moderate so famously taken to task in Martin Luther King Jr.’s “Letter from a Birmingham Jail.” On race, Justice Brandeis usually sided with progress but was not particularly outspoken in favor of racial justice and equality. When he did act to gradually move the needle, it was usually in private by, for example, encouraging black students at Harvard Law School to work for the NAACP. The late great Justice was an opponent of racism who wasn’t looking for a fight.

On the issue of protecting the rights of Jews and combating anti-Semitism, however, Brandeis was much more audible. An avowed supporter of the Zionist movement, he was active in the Zionist Organization of America during its early years and played an important role in uniting the movement’s leadership in 1930. The ZOA, associated as it was with figures such as Brandeis, was a mainstream organization and so it was no surprise that it was ultimately included in the Conference of Presidents of Major Jewish Organizations, the umbrella of mainstream American Jewry.

Today, the ZOA continues to embrace the name and likeness of Justice Brandeis — against the wishes of at least one of his heirs — including at its annual Louis D. Brandeis Memorial Dinner, which in past years has featured Steve Bannon, Sebastian Gorka, and the Fox News firebrand Jeanine Pirro. Its principal mission now, it seems, is to be the home of proud far-right Jews who are unapologetic in their support for the entirety of President Trump’s agenda.

In recent years, the organization’s image has become inseparable from that of its president, Morton Klein, whose active Twitter presence resembles the worldview of a Breitbart comment section denizen. Which is, to be blunt, racist, Islamophobic, and flirtatious with a strand of anti-Semitism popular on the far-right.

The examples of Klein’s execrable behavior and statements are too numerous to discuss them all individually at op-ed length.

They changed their name from Hebrew immigrant aid society to merely hias because they no longer bring hebrew(Jewish) refugees to America or elsewhere. They do bring Muslim refugees to America and ADL polls show most of them are antisemitic. https://t.co/w79TyE9GXf

But his most recent verbal salvo, a preposterous attack on the Black Lives Matter demonstrations taking place across the country in the wake of the police murder of George Floyd, deserves special focus. On Saturday, Klein tweeted an anti-Semitic conspiracy theory: “BlackLivesMatter is an antisemitic, Israel hating Soros funded racist extremist Israelophobic hate group.”

This was not the first time Klein has engaged in unhinged attacks on Soros, and he invokes that name for a reason. As Emily Tamkin, a journalist and author of a forthcoming book about George Soros, has documented, the purpose of these attacks is to target “the many men and women whom these conspiracy theories patronize, delegitimize and, often, further marginalize.” In this view, Black Lives Matter is not an organic response to the countless indignities and crimes of racism, but a dangerous menace financed if not controlled by a liberal Jewish billionaire.

The other parts of Klein’s rant are at best misleading: an organization called the Movement for Black Lives indeed issued an anti-Israel platform position that falsely accused the Jewish state of “genocide.” It was a horrible statement that has since, thankfully, been removed from their website.

But this organization is not the driving force behind the Black Lives Matter movement and many — I would venture to say the vast majority — of people attending BLM protests are not especially familiar with it. They are there to protest racism and police brutality in America, not Israel. Similarly, these protests are not the initiative of an organization, including ones that have received funds from Soros’ Open Society Foundations.

By way of contrast to Klein, mainstream American Jewry is standing in solidarity with the Black Lives Matter movement. Several of the largest organizations in the Conference of Presidents, including the Conference itself, have put out statements supporting the movement. They have all been bereft of the conspiracy theories Klein has tweeted and retweeted on a number of occasions.

The record continues to show that Morton Klein is an unabashed racist. Accountability for our community looks like demanding that @Conf_of_Pres expel Mort Klein from this communal body or leaving it altogether. pic.twitter.com/7rO2PVFKiy

But as my friend and Forward columnist Tema Smith put it, “If you stand with black Jews, that should mean always, even when it’s politically inconvenient or uncomfortable.”

If you stand with black Jews, that should mean always, even when it’s politically inconvenient or uncomfortable.

Translated for current circumstances, this means you can’t stand with Black Lives Matter one day and the next politely join a consensus with a man who deems those demonstrations “Soros funded,” “white hating” and “filled with hatred of Jewish people.”

Why are BlackLivesMatter supporters&leaders filled with hatred against Jewish people &Israel, but praise the terrorist Palestinian regime that pays Arabs to murder Jews and Americans. BLM lies about Israel even though MartinLutherKing said if youre anti Israel you’re antisemitic. https://t.co/Dpq4YcrNl8

The United States Constitution guarantees freedom of speech and assembly, as it should, and the ZOA is entitled to operate any way it wishes and promote whatever horrific views it wants. It is up to anti-racist members of the Conference of Presidents if they want to continue legitimizing them. If it is impossible to censure or remove Klein from the Conference, they should consider leaving and forming a new umbrella that is representative of the Jewish values they want to uphold.

Justice Brandeis, perhaps to his regret, did not speak out strongly enough against racism. Still, he was a man of his time — the early 20th century — and was more enlightened than most of his generation.

American Jewish leaders have no such excuse today. They know Klein’s statements and views are abhorrent, and it’s time they stopped being silent in the name of an unrequited collegiality and morally corrupt consensus. Enough is enough.