Here are the notable Jews who were pardoned by President Trump 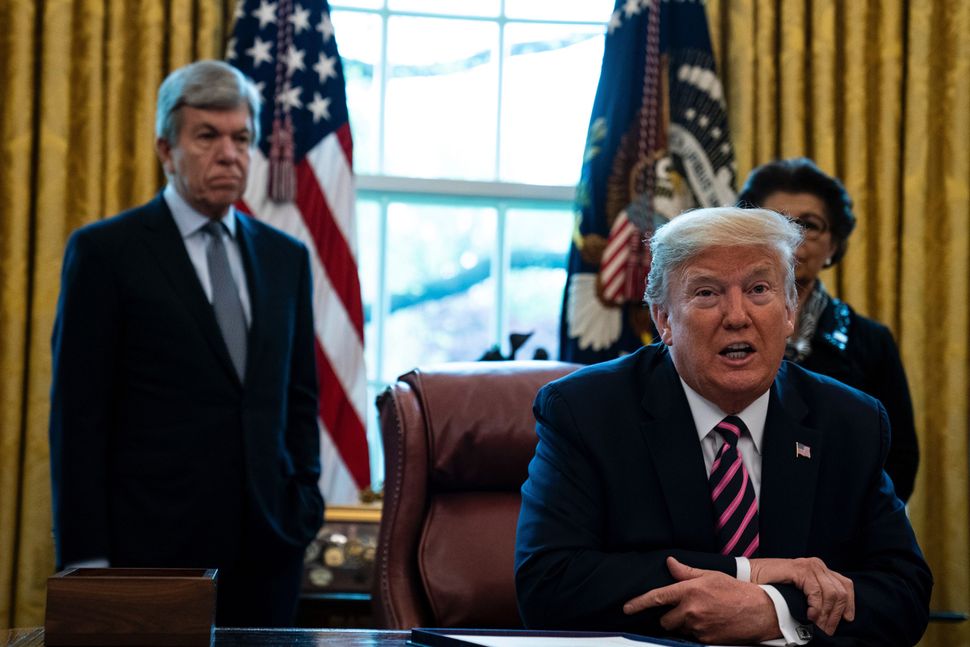 U.S. President Donald Trump participates in a signing ceremony for H.R.266, the Paycheck Protection Program and Health Care Enhancement Act, with members of his administration and Republican lawmakers in the Oval Office of the White House in Washington DC on April 24th, 2020. The bill includes an additional $321 billion for the Paycheck Protection Programs forgivable loans to cover payroll and other costs for small businesses. Hospitals and other health care providers will receive $75 billion and another $25 billion is allocated for COVID-19 testing. (Photo by Anna Moneymaker/The New York Times/POOL/Getty Images) Image by Getty Images

Former President Donald Trump closed out his tenure in the White House as so many presidents do, with a slew of pardons. The 143 names included major figures like Steve Bannon, and former Congressman Rick Renzi, but also some notable Jews, including:

A leader in the Syrian Jewish community, Adjmi heads A&H acquisitions, a New York City real estate company. He spent four years in prison in the 1990s after he was convicted of money laundering on behalf of Colombia’s Cali Cartel, once one of the most powerful criminal organizations in the world. According to the White House, Adjmi’s pardon was backed by Haim Chera on behalf of his father, the late Stanley Chera, who was a fellow Syrian Jewish real estate mogul – and close friend of former President Trump.

Broidy, the disgraced former RNC finance chair, pleaded guilty last year to acting as an unregistered foreign agent on behalf of Malaysian Prime Minister Najib Razak. Razak offered Broidy $75 million to bring an end to the U.S. Justice Department’s investigation into the 1MDB scandal in which Razak allegedly stole $700 million from Malaysia’s state-run enterprises. Broidy, who was heavily involved in Jewish causes, was supported in his plea for clemency by several rabbis.

Former editor-in-chief of the New York Observer, and a long-time friend of Jared Kushner, Kurson was charged with cyberstalking during his divorce proceedings. However, the White House’s statement about his pardon states that his ex-wife wrote a letter in his defense, denouncing the charges and claiming that the focus on the case was politically motivated.

Hillel “Helly” Nahmad is a scion of the Nahmad family, an art-dealing dynasty based in Monaco with roots in Aleppo, Syria. Combined, the various members of the Nahmad family are said to be the largest buying force in the art world today. Nahmad is also a former neighbor of Trump, owning the entire 51st floor of Manhattan’s Trump Tower.

Nahmad served five months in prison in 2014, after pleading guilty to running an underground gambling ring. According to the New York Times, the ring had ties to the Russian-American mafia. The ring is said to have brought in some $100 million of which Nahmad received a cut.

Sella, the former commander in the Israeli Air Force who recruited Jonathan Pollard as a spy, spent some three decades in a U.S. prison for his role in the affair. Unlike his agent who was released in 2015, Sella was only released on parole in November of 2020. His pardon was requested by Israeli leadership to bring a final end to the Pollard affair.

Weinstein, an Orthodox Jew from Lakewood, NJ, was convicted and sentenced to 22 years in prison for a real estate Ponzi scheme he ran, and another two years for an investment fraud plot, where he falsely claimed to investors that he controlled blocks of Facebook stock during the social media giant’s public offering in 2012. Weinstein’s Ponzi scheme cost investors some $200 million. According to the White House, his pardon was supported by Alan Dershowitz and the Tzedek Association, which advocates prison reform.

Weiss, a Brooklyn native, wasn’t looking at release this decade or even this century. In fact, his release date was set for June 10, 2738. Weiss’s 845-year prison sentence for his involvement in a fraud scheme that stole millions from the National Heritage Life Insurance Company. His sentence was the longest for a white collar crime in American history. His pardon was also supported by Dershowitz.

Here are the notable Jews who were pardoned by President Trump