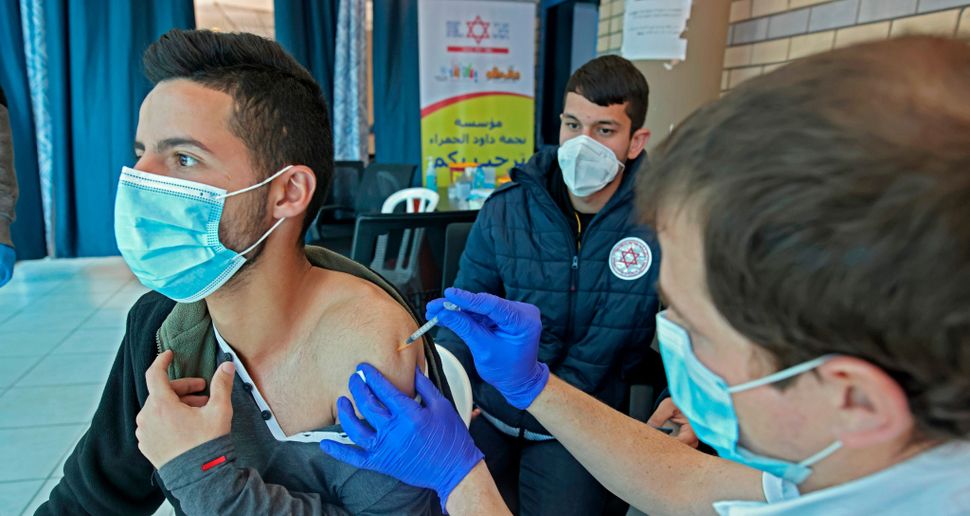 A paramedic with Israel’s Magen David Adom medical services administers the Pfizer-BioNTech COVID-19 vaccine to a Palestinian man on February 23, 2021 at Qalandia checkpoint on the crossing between the West Bank city of Ramallah and Israeli-annexed east Jerusalem. By AHMAD GHARABLI/Getty Images

Israel’s cabinet has approved extending the country’s vaccination campaign to Palestinian laborers working in Israel and in West Bank settlements, the Coordinator of Government Activities in the Territories said in a statement Sunday.

Some 100,000 Palestinians are estimated to hold a permit allowing them to work inside Israel and the settlements.

The inoculation campaign is set to begin in the coming days, the statement said, without disclosing how many vaccine doses were allocated for it.

Israeli medical staff will administer the vaccines, which were manufactured by Moderna, it added.

Ran Goldstein, executive director of Physicians for Human Rights Israel, said the decision to vaccinate Palestinian workers is “an essential and necessary step, and better late than never.”

At the same time, he said, “Israel has an ethical and legal obligation to vaccinate the entire Palestinian population,” adding that it’s “appropriate to put considerations and interests of health over every other consideration.”

The Palestinian Health Ministry announced two weeks ago that Israel has agreed to vaccinate up to 100,000 Palestinian workers in Israel, following a meeting between Palestinian and Israeli health officials.

Some 30,000 workers have been sleeping in Israel on a daily basis, in a bid to prevent infection by people moving between Israel and the West Bank. However, some officials estimate that many other workers return to the West Bank each day illegally.

The Palestinian Authority has also asked Israel to ensure vehicles used by its Health Ministry are allowed to move freely in the West Bank, particularly in the area of Masafer Yatta in the South Hebron Hills, where Palestinians say Israel has obstructed health workers’ movement.

Israel has provided 2,000 doses of the Moderna vaccine to the Palestinian Authority earlier this month, allowing it to begin vaccinating medical workers, and the P.A. says it independently acquired 10,000 doses of the Sputnik V vaccine.

This story first appeared on Haaretz.