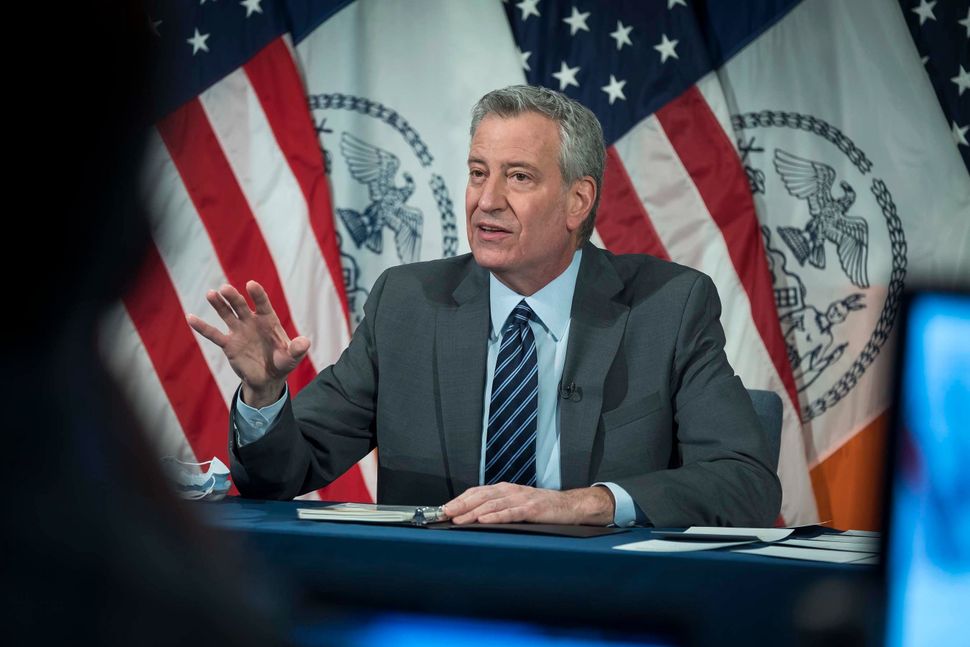 New York City Mayor Bill de Blasio condemned offensive remarks by Susan Lerner, executive director of Common Cause New York, against the Orthodox Jewish community in Brooklyn. In an interview with the Gothamist in February, a local New York website, Lerner characterized the Orthodox community as an ‘extremist bloc.’

“I find her comments absolutely wrong, and I find them unacceptable,” de Blasio said during a daily press briefing at City Hall on Monday.

The comments by Lerner, the longtime head of the government watchdog group and an advocate for voter reform, were featured in a Feb 19 article about mayoral candidate Andrew Yang’s position in defense of yeshiva education. Lerner suggested that the new ranked-choice voting system will reduce the influence of this large voting bloc. “If you’re pandering to an extremist bloc, you’re perhaps not being strategic,” she said.

In response to a Forward survey last month, Yang, one of the leading mayoral candidates, said he would not take action to boost secular education in yeshivas if elected mayor of New York City, a position that was perceived as an attempt to galvanize support in Brooklyn’s Orthodox communities. “As mayor, I will always respect religious freedom including the freedom of parents to do what’s best for their kids educationally,” Yang told the Forward. “Thus, we shouldn’t interfere with their religious and parental choice as long as the outcomes are good.”

Yang’s response was the one most in line with the position of the ultra-Orthodox leadership, which is wary of any government interference in the private education system. The other candidates’ responses ranged from working closely with the community to enact changes to fully enforcing the law when needed.

Lerner has been an outspoken critic of the yeshiva education system. Last week, Lerner doubled down on her initial comments. “No politician should support any school or community flouting NYS law. Genug shoyn,” she tweeted, using the Yiddish phrase for “enough already.”

Last week, State Assemblyman Simcha Eichenstein from Brooklyn called on Lerner to step down from her position after she refused to retract her comments amid criticism from local politicians. “If I called an ethnic group an ‘extremist bloc’ you’d call for my resignation,” Eichenstein wrote on Twitter.

Eichenstein said in a statement on Monday that it is “outrageous and completely unacceptable” that Lerner is still in her position. “Had Susan Lerner made these remarks about any other ethnic group, there would have been a mass protest calling for her resignation,” said Eichenstein. “There is no place for bigoted and divisive language in the halls of government.”

But the mayor stopped short of calling for Lerner’s resignation. “I think she should immediately clarify them and recognize that that’s just not fair to characterize such a large and diverse community that way,” de Blasio said.

At the briefing, de Blasio defended his administration’s approach on the matter and his handling of the inquiry into the yeshiva education system. He suggested his approach was to balance it with respect for people’s “constitutional rights.”

“What we’ve tried to do is to work with yeshivas to improve education for our children,” he said. “That is our responsibility and the state’s Department of Education’s responsibility. But you can do that in a respectful manner that also respects people’s constitutional rights — that’s the balance we have struck. And in fact, what we found overwhelmingly is a good outcome. With real work, there was agreement on how to improve the curriculum for the benefit of everyone.”