In 2019, the City of Chicago informed Robert’s Fish Market, the only kosher fish market in Chicago, that the permit for its iconic sign had expired. The city fined the shop’s owner, Arturo Venegas, and Venegas took it down.

That made a tough business even tougher. But it also galvanized neighborhood support, leading to a new sign — and new hope for the revitalization of a Jewish neighborhood. 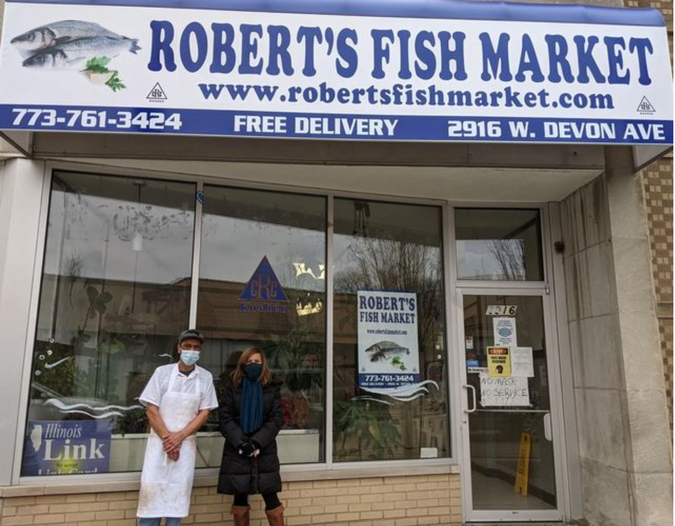 Opened in 1976 by original owner Robert Schuffler in the West Rogers Park neighborhood on Chicago’s far North Side, Robert’s Fish Market is a neighborhood staple within the local Jewish community. Schuffler spent a happy life in the fish market for over 20 years before handing over the reins to Venegas, who was his apprentice and employee, in 2002.

Although Schuffler died in 2015 at the age of 97, he left behind a legacy that’s still felt in the community, symbolized by the shop’s simple blue and white awning sign with big letters that reads “Robert’s Fish Market.” 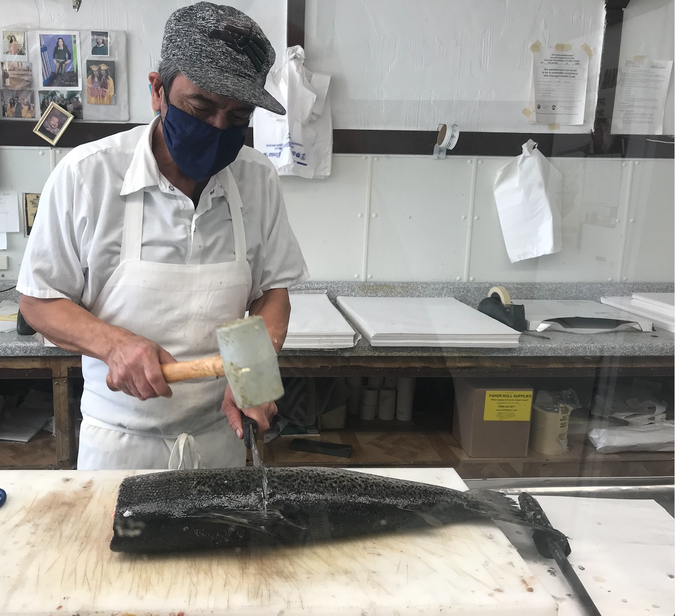 The sign, which Venegas remembers was up long before he came to Chicago in 1983 from Michoacan, Mexico, has helped bring in new and loyal customers over the decades. But after the City of Chicago fined the shop in 2019 because the sign’s permit was not up to date, Venegas was forced to take it down.

“When I took over, the sign was there so I didn’t know” the permit wasn’t up to date, Venegas said.

The shop went over a year without its signature sign, which made business difficult, he said.

Customers didn’t see the sign, said Venegas, “so they would drive all the way to Broadway and Devon. They were so used to seeing it so they’d call me and ask, ‘Did you move?’ and I’d say, ‘No, we are still here.’”

That’s when the community stepped up.

When she heard about the city dispute with Venegas’ sign, Ellen Doppelt knew she had to go to bat for one of the community’s own. Doppelt is executive director of the Jewish Neighborhood Development Council of Chicago (JNDC), which has been a voice for the Jewish community since the 1970s, when West Rogers Park was close to 75% percent Jewish,

“He needed an organization like ours to step in, help in getting estimates, apply for special funding and for the permits — the whole maze of everything,” Doppelt said. “Getting the sign and the whole project was a nice partnership with Arturo and the landlords of the building. That speaks well for Arturo — they really wanted to do this for him.”

She said the new sign cost a little under $3,300, and funding came from the JNDC, the Rogers Park Business Alliance and some directly from Venegas.

She also credits 50th Ward Alderman Debra Silverstein for helping expedite the permit application sign process and navigating city requirements, which can be daunting for small business owners serving top-quality products to their customers without any other employees to help.

“Robert’s Fish Market has been a fixture in the 50th Ward for decades, and I was very happy to help them revitalize the storefront,” said Silverstein in a statement. “The city permitting process can be difficult, but my office is always available to help business owners and residents navigate the bureaucracy.”

After help from the community and local city officials, Venegas got a new awning and storefront sign in early January with the same iconic blue letters and an improved picture of the two fish that greet customers, keeping the historic kosher business looking fresh and a step toward Jewish neighborhood revitalization.

In the over two months that Robert’s has had the new sign, Venegas said business has increased and new customers have found him because of it. Just as patrons can breathe some relief, the owner can too, because now his business can run smoothly again. He said he has received compliments about the new sign as well.

With a slight smile and a bow of his head, he said the pandemic has also brought in more business lately. He called it an unexpected side effect

“I don’t want to say thanks to coronavirus, but business went up,” he said. “There’s more people cooking at home now.”

West Rogers Park community members and local organizations have been working to make Devon Avenue, the street that the fish market lives on, a more inviting and revitalized business corridor since 2014. Doppelt said she sees the new sign at Robert’s as an extension of that work, especially as the neighborhood’s demographic has changed over the years.

“The stores on Devon that cater to Jews are a fraction of what they used to be,” she said. “We want to keep those stores viable and competitive, and attractive as possible because there is competition from stores in Skokie and Evanston.”

The area, which is one of the city’s most diverse neighborhoods along with neighboring communities West Ridge and Rogers Park, used to be a bustling center of Chicago Jewish life in the 1950s and ‘60s. After Jews moved to the suburbs, the area began to see an influx of Asian, African, Mexican and Eastern European businesses, which are still prominent today. Now, the neighborhood is experiencing a modern-day rebirth as a largely Orthodox Jewish residential community.

This past and present history of the Jewish community is documented in “Driving West Rogers Park: Chicago’s Once and Future Jewish Neighborhood,” a documentary produced by filmmaker Beverly Siegel, who is also the president of JNDC.

Venegas, who has lived in Chicago for 38 years, said the changes on Devon Avenue are “night and day.” He remembers seeing families out with children and friends until the early hours of the morning when he and Schuffler used to work until 2 a.m. Now, as the street has experienced many closed businesses and culture changes, it’s quiet and not as clean, he said.

Folks at the JNDC and the Rogers Park Business Alliance hope that isn’t the case for much longer. As Devon Avenue completes construction on its massive, years-long streetscape project to make the neighborhood a shopping destination with more pedestrian and bike-friendly access, there is excitement that the street can once again become the main thoroughfare.

Silverstein, which has governed the area since 2011, agreed. The alderman said that the street upgrade is “safer, brighter and greener” and will help the area financially.

“Devon Avenue has undergone a sweeping transformation over the last few years, with a multimillion-dollar Streetscape project and new and exciting businesses,” Silverstein said in her statement to The Forward. “The new awning will help Robert’s Fish Market fit right in.”