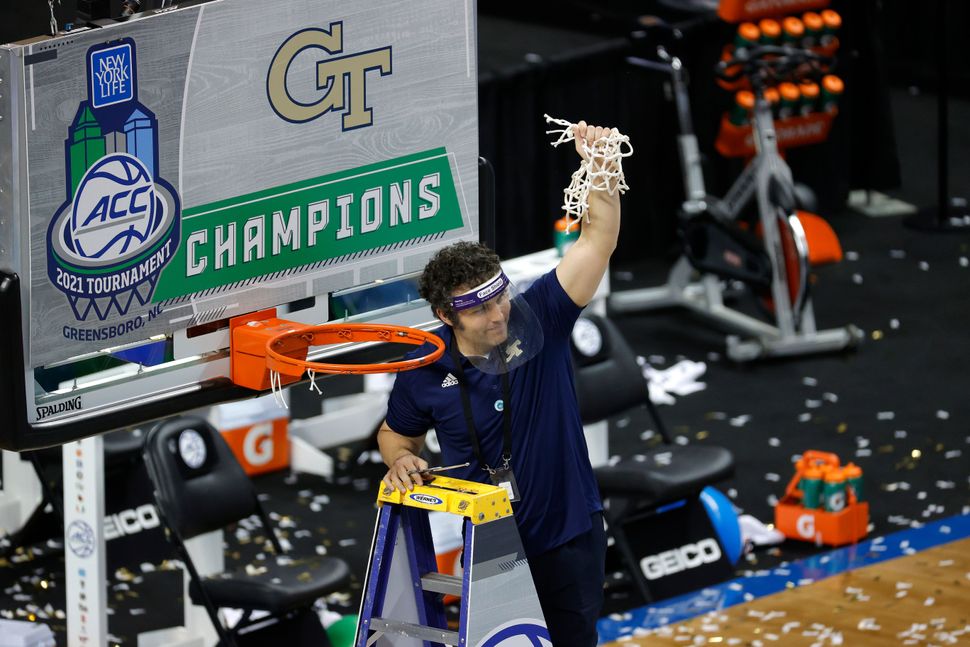 Josh Pastner cuts the net from the rim after defeating the Florida State Seminoles Image by Jared C. Tilton/Getty Image

Georgia Tech’s Josh Pastner became the first Jewish head coach to lead a college basketball team to win an Atlantic Coast Conference championship, topping a division that includes titans Duke and North Carolina and becoming another example of the renaissance for Jews in American sports.

Pastner, 43, a native of West Virginia, had already won the admiration of sports fans across the country earlier in the conference tournament, after his 55-second answering machine message was played on ESPN and went viral.

The conference Pastner won in his fifth year at Georgia Tech is known for producing Michael Jordan, Tim Duncan, Zion Williamson and many more of basketball’s all-time greats and current stars. And its coaching ranks have long been dominated by waspy icons like Dean Smith, Roy Williams, and Mike Krzyzewski.

Pastner, with his dark, curly hair and stout, sub-six-foot frame, may cut against that image. But he is no less sermon-inclined than his peers. 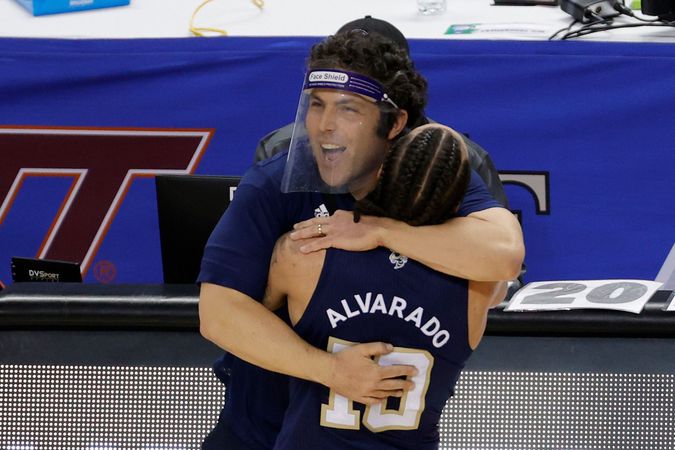 Josh Pastner and Jose Alvarado #10 of the Georgia Tech Yellow Jackets celebrate in the final seconds of the second half of the ACC Men’s Basketball Tournament championship Image by Jared C. Tilton/Getty Images

In a 2017 profile of Pastner published in the Atlanta Jewish Times, the coach said he carried a copy of Abraham Twerski’s book “Growing Each Day” with him on the road. (Twerski died in January.)

And the voice message greeting anyone who gets Pastner’s voicemail is unabashedly inspirational.

“Focus on what’s important and be grateful,” he says in the message. “Live your life with no regrets. I am not in right now but if you leave your name and telephone number clearly, I will get back to you as soon as I can.”

Pastner entered basketball through the side door. As a freshman at the University of Arizona, he walked on to the Arizona Wildcats team — in other words, he was not offered a scholarship to play for the school — and ended up playing four years under legendary coach Lute Olson. In 1997, he was on the Arizona team that won the Division I national championship. 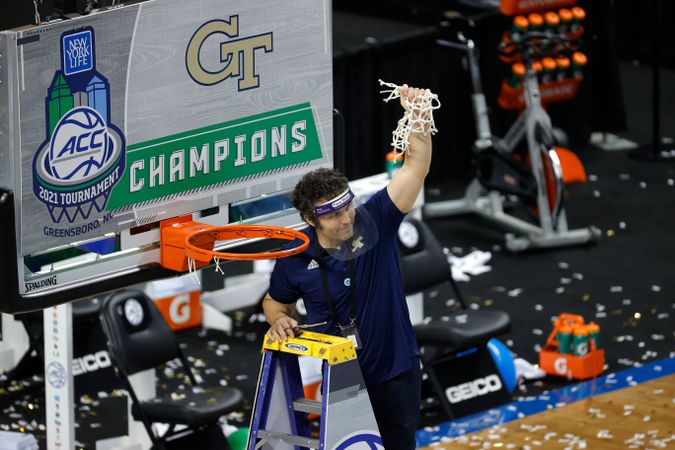 Josh Pastner cuts the net from the rim after defeating the Florida State Seminoles Image by Jared C. Tilton/Getty Image

Whenever he has received acclaim for his victories on the sidelines, Pastner has also made headlines for being a mensch.

In 2017, at the end of his first season as a head coach, he paid for all the tickets in the student section for both of the team’s NIT games.

“Some people call it tzedakah; I call it paying it forward,” he told the Jewish Times at the time.

And on Sunday night, as the team reveled under the confetti of its first championship in 28 years, Pastner remembered to thank the broadcast crew for their work.

As for the curly locks that have become his signature aesthetic, they face an uncertain fate. Pastner promised to let his team have its way with his hair — as long as they cut the ACC tournament nets first.

But he may ask for a reprieve until the conclusion of Georgia Tech’s run in March Madness. The No. 9-seed Yellow Jackets put their eight-game win streak on the line against No. 8-seed Loyola (IL) on Friday.

“I’d rather keep my hair as it is,” Pastner said Sunday night. “Maybe I’ll say it’s a good-luck charm.”