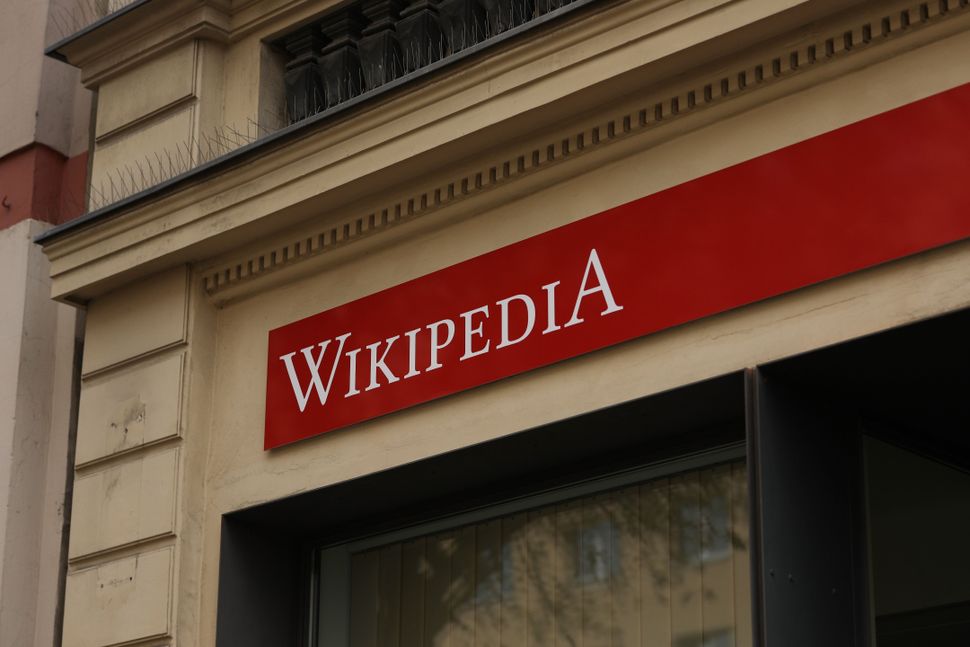 Wikipedia logo is seen on November 06, 2020 in Berlin, Germany. Photo by Getty Images

The ADL launched an effort last spring to train some of its employees to contribute to Wikipedia articles but it wasn’t until late last month that the edits made by ADL staff came to the widespread attention of volunteer editors on the website.

“I love the ADL … But this is a $100 million per year + organization. And they have arranged nine staff on a sort of Wikipedia source placement offensive.”

“I have noticed that majority [sic] of their edits consist of working ADL sources into different articles,” an editor who goes by the username Graywalls wrote in a March 24 post.

Todd Gutnick, a spokesman for the ADL, said the organization hired an experienced Wikipedia editor last May to train eight of its staff to contribute to the user-generated encyclopedia and that it had followed the website’s rules. A ninth ADL employee was already an active Wikipedia editor when the project began.

“ADL staff members who contributed were fully transparent,” Gutnick said in an email, adding that they followed Wikipedia’s conflict of interest guidelines and disclosed their affiliations on their user biographies and elsewhere on Wikipedia.

The ADL staff involved in the project made 261 edits across 34 articles, adding more than 9,000 words to Wikipedia, according to a webpage they used to coordinate the work, before deciding to suspend the editing campaign on April 2.

Many of the edits focused on the ADL’s research into domestic extremism, including contributions to the articles on the QAnon conspiracy theory, the Jan. 6 riot at the U.S. Capitol and the far-right militia group the Three Perecenters.

“Wikipedia is a unique project in that thousands of editors come together to ensure that good, reliable information is freely available to the public,” Gutnick said. “ADL experts have extensive knowledge to offer this public discussion and several of them saw an opportunity to contribute that expertise, particularly based on years of tracking extremism.”

ADL staff also extensively edited the article on the Anti-Defamation League itself, making more changes to that article than any other over the last 10 months, according to the webpage coordinating their edits. The changes and additions appear to have mostly focused on improving the article’s clarity and adding background on the organization’s history.

“As far as the edits they’ve made to the ADL article itself thus far, I don’t see a problem with it,” Graywalls wrote in March. “They didn’t add or remove any contentious contents in prose or promotional links and they’ve disclosed their affiliation.”

“This information is vital to the public. We still believe our expertise offers value to the editing community and to readers.”

But Ryan McGrady, an experienced Wikipedia editor who was involved in the discussion about the ADL with Graywalls and other editors, said it is rarely appropriate for people who work at an organization or company to make changes to an article about their employer.

“Editing the organization’s own article directly is a very bad idea, and a sure way to attract lots of cynical scrutiny,” McGrady said in an email interview with the Forward.

The articles on Wikipedia are created and edited almost entirely by anonymous editors who volunteer their time. When disputes occur over whether to allow a certain change to be made to an article — or whether a given user has a conflict of interest — the volunteer editors rely on an arcane set of internal rules that can be difficult for outsiders to understand.

The discussion over whether the ADL staff had violated rules regarding conflicts of interest or so-called sockpuppeting, where a single user makes edits from multiple accounts, was complicated by the unusual nature of multiple employees of a reputable organization making contributions to the encyclopedia in a somewhat coordinated manner.

A consensus seemed to emerge that while the ADL-affiliated users were not violating the letter of Wikipedia law, the unusual nature of what they were doing seemed in opposition to the spirit of the website.

“Ok first, I love the ADL, even being a Canadian,” wrote an editor who goes by the username Possibly. “But this is a $100 million per year + organization. And they have arranged nine staff on a sort of Wikipedia source placement offensive.”

“I too have never come across something quite like this,” Graywalls replied. 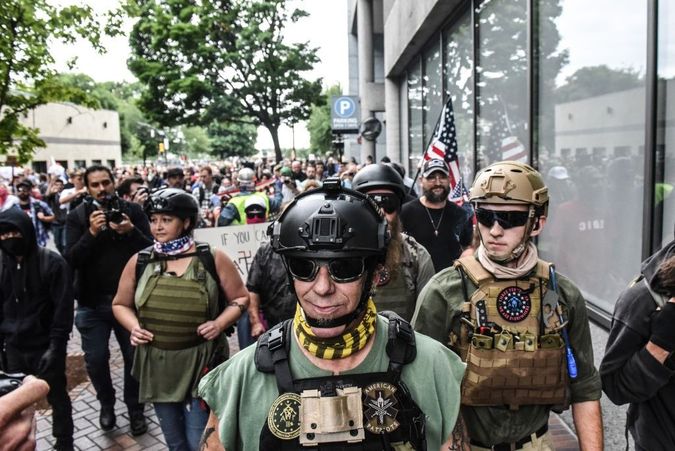 Counter-protesters chase a group of people called the Three Percenters during an alt-right rally in Portland, Oregon last August. ADL staff contributed to Wikipedia entries on domestic extremists, including the Three Percenters. Photo by Getty Images

Another Wikipedia editor in the discussion acknowledged that they had donated to the ADL in the past but said the politically-charged nature of some ADL work – especially surrounding Israel and its conflicts with left-wing Jewish groups – made its edits to the site more complicated.

“We do not want any advocacy group contributing to our articles in public affairs,” that editor wrote.

McGrady said that because public relations firms and business owners regularly break Wikipedia’s rules to insert blatant promotional text into articles, contributions from users affiliated with the entity they are writing about face an uphill battle to convince the wider Wikipedia community that they are acting in good faith.

“There are legitimate worries among the community that even a large number of volunteers cannot compete with well funded promotional campaigns, so many are understandably wary (if not downright cynical) about any real or perceived influence of money on the project,” he said.

But McGrady said the ADL staff who were editing the encyclopedia seemed to be doing so largely legitimately.

“To me, ADL is a particularly difficult case,” McGrady said. “Clearly the staff contributors knew about the topics they were contributing to, understood that ADL is indeed considered a reliable source for a wide range of topics on Wikipedia, added citations properly, and seemed primarily interested in disseminating knowledge rather than promoting ADL itself.”

McGrady said they fell short by directly editing the ADL article and relying too heavily on the ADL as a source for new sections they added to articles, which came dangerously too close to self-promotion, as opposed to using their expertise to add citations from a variety of sources.

After a roughly week-long discussion on a backend Wikipedia page concerning whether the ADL was breaking the website’s rules, and the removal of several ADL contributions, an ADL staff member going by OceanicFeeling123 announced that the organization was suspending its project.

“The nine of us have decided to stop editing and take time to reevaluate,” the staff person wrote. “We are sad to see our well-sourced contributions removed about the intersection of misogyny and white supremacy, the aftermath of the storming of the U.S. Capitol, the spread of conspiracy theories on social media, and misinformation about Antifa.”

“This information is vital to the public. We still believe our expertise offers value to the editing community and to readers.”