Boris Volynov was the first Jew in space. Antisemitism nearly prevented him from going. 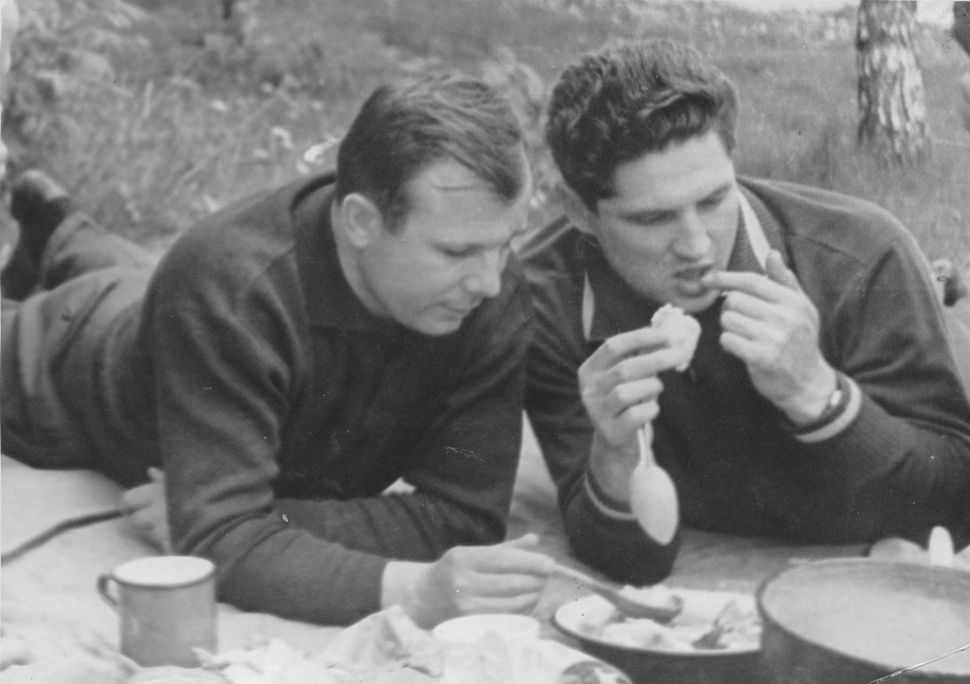 Volynov and Gargarin picnicked together during their training. Courtesy of Wikimedia Commons

Sixty years ago this week, for the first time in human history, one of our species ventured beyond the atmosphere.

That man was Yuri Gargarin, a young Soviet cosmonaut who manned the Vostok 1 spacecraft. On April 12, 1961, he became the first human being to orbit the planet.

Despite rumors to the contrary, Gargarin was almost certainly not a Jew. (The website JewOrNotJew.com poignantly declares: “Sadly, not a Jew.”)

However, the first Jew to exit Earth’s atmosphere was not too far away – indeed, he was part of the same first cohort of cosmonauts.

Boris Volynov was a Soviet pilot, born to a Jewish mother in the Siberian city of Irkutsk.

Though he trained in the initial class of cosmonauts with Gargarin, he wouldn’t get the chance to fly into space until eight years later in 1969. But antisemitism almost lost him that opportunity.

Volynov was originally chosen as one of two possible leaders for the Soviet Union’s Voskhod 1 mission in 1964, which was set to be the first-ever multi-crew space flight. However, both Volynov’s Jewishness and the fact that one of his crewmates was the son of a victim of Stalin’s purges led Soviet authorities to switch both of them out for an alternative crew at the last minute.

Nonetheless, two years later, Volynov was tapped to lead the Voskhod 3 mission. But the flight was scrapped just 10 days before launch after the death of Sergei Korolev, the Soviet Union’s chief rocket engineer.

Finally, the same year Neil Armstrong walked on the moon, Volynov was picked for the Soviet space program’s Soyuz 5 mission, during which he performed the first ship-to-ship docking in space with the previous Soyuz 4 craft.

“Thus ended the painfully long journey of Boris Volynov to space flight,” Soviet Air Force General Nikolai Kamanin, who oversaw the cosmonaut training program, wrote in his diary. “He began preparing for flights together with Gagarin, was a backup five times and once was appointed commander of Voskhod, but before the upcoming flight there was a big threat that he would not be included in the Soyuz 5 crew just because his mother is Jewish.”

“In the very last days, letters came from the Central Committee with an appeal: ‘Do not send Jews into space!’ With great difficulty, we managed to protect the good guy from these malicious and stupid attacks,” Kamanin wrote.

While the national backgrounds of other cosmonauts were usually highlighted in Soviet fanfare, Volynov’s Jewishness was still downplayed before and after lift off.

A 1969 report by the Jewish Telegraphic Agency pointed out that it was, if anything, further proof of his Judaism.

Under Soviet law, Jews were considered a national group – comparable to other Soviet ethnic groups like Tatars or Chechens – rather than a religious one.

Despite the setbacks, Volynov set the stage for other Jewish spacefarers such as American astronaut Judith Resnick, the first Jewish woman, and both the second Jew and second woman in space; Ilan Ramon, the first Israeli astronaut; and Jessica Meir, who participated in the first all female spacewalk in 2019. Others, including NASA’s Kayla Barron, are prepping for future missions.

At 86, Volynov remains the last surviving member of the Soviet Union’s first class of Cosmonauts, and the world’s first batch of space explorers.

Boris Volynov was the first Jew in space. Antisemitism nearly prevented him from going.