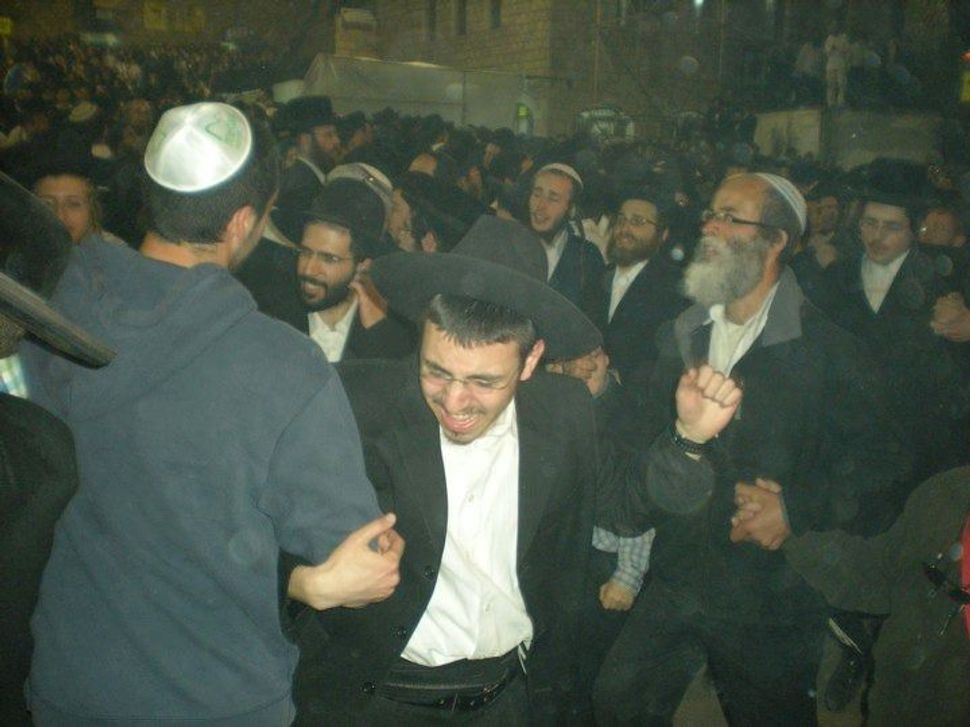 A friend of the author’s dances on Lag B’Omer on Mount Meron.

Within seconds of getting off the bus a bag of chocolate milk came flying at me. I caught it, bit it open, recited the shehakol blessing — that was the point, to make a blessing on this holy ground — and sucked down the whole thing. I looked at my friends in awe: What was happening? What is this place? Then we were swept into the tide of other fresh arrivals, moving towards something we couldn’t yet see or even picture.

This was Mount Meron on Lag B’Omer –– a dozen years before that phrase was an international headline of 45 people being crushed to death in a stampede.

It was May 11, 2009. I was 18, on a gap year program with just a couple weeks left, and the melancholy of imminent separation was looming. Half of us would be going to college in the U.S., the other half in the U.K., and once we went our separate ways, most of us would never see each other again. 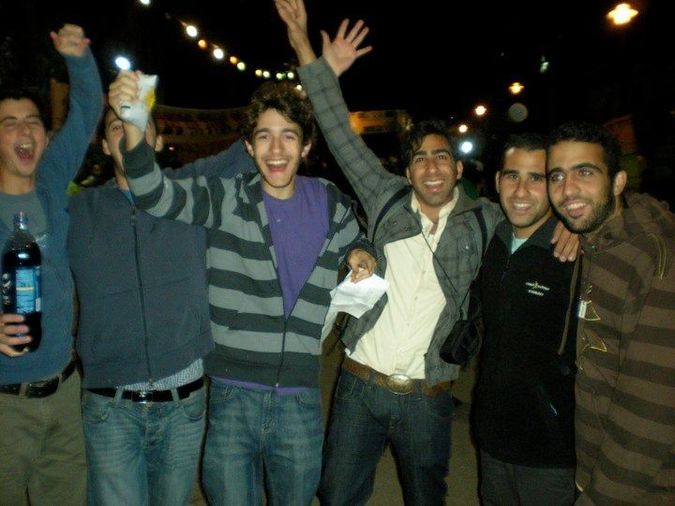 The author, center in the striped jacket, celebrates Lag B’Omer on Mount Meron in 2009 with two friends and three strangers.

Most of us were secular, the gap year a final swig of Jewish identity formation before adulthood, Lag B’Omer the last call.

As I was about to learn, Mount Meron is a religious experience in the literal sense. Hundreds of thousands of Jews from all over the world come to celebrate — the vast majority Hasidic men but plenty of religious tourists and gap-year kids like me, there to cross off a bucket-list item they didn’t know they had.

From the moment you arrive you are fed mitzvot. You can inscribe a letter in a real Torah scroll. There are people performing kosher shechitah — ritual slaughter — and then roasting and serving the food. You can put a letter in the wall of the tomb of Rabbi Shimon Bar Yochai, the father of Jewish mysticism who is known through the acronym Rashbi. And you will, of course, dance.

In the pictures, I look like I’m on serious drugs, but of course I wasn’t. None of us were. There was no reason to be. It’s impossible to feel like you aren’t on some kind of high, united with the masses in a Biblical scene of Biblical proportion, chasing a year’s worth of spiritual community in one wild unforgettable night.

Engaging with Hasidic evangelists always involves some kind of negotiation for other members of the tribe — they want to give you more Jewishness, you keep fighting it off. But at Meron, a rip current of shtreimels takes you away, and you let it. There is no negotiation — photos from that night show you holding a CD because someone must have pressed a CD into your hand. Another gift from a stranger who didn’t consider himself one.

To call Meron “overcrowded” would be an understatement. But it would also invert the point. Mount Meron on Lag B’Omer is not supposed to be subdued like the Western Wall, or — Heavens forbid — meditative like nearby Tsfat. Spirituality at Meron is accessed through body heat, through the sheer number of revelers radiating elation and excitement, through the swirling Hora circles that inhale you like a tornado. It’s rowdy, sweaty, claustrophobic.

Which is to say: it was a religious fantasy. It was not a fire marshal’s fantasy. The density ranges from “I’m moving with the crowd” to “I’m not moving with the crowd” to “I’m ready to leave this area and can’t.” Late in the night, I went with a friend to the epicenter of the site, Rashbi’s tomb, to put a note in the wall. This tradition is where the similarities with the Western Wall end. I remember the Rashbi wall as less than 20 feet wide — and there are, quite literally, thousands of people trying to get there. Still, I thought myself capable of squeezing through tight spaces — certainly smaller than these grown men, and not worried about losing a shtreimel by putting my head down and forcing my way forward. With a prayer crumpled in my fist and only about 30 feet away from the wall, that’s what I did.

It turned out that we had dramatically overestimated our ability to beat the crowd. After about half an hour packed with a few hundred other people in an area the size of a shipping container I had advanced just a few feet, and my friend, after passing me his note, had turned around. After I was lifted off my feet in a way that felt decidedly unspiritual, I gave up. It still took another half hour to make my way out. When I brought it up yesterday, my friend said the Rashbi wall was “only one of a couple times I’ve actually been afraid I might die. All the other ones from surfing.”

Mount Meron on Lag B’Omer. The beauty and peril of the place brings the joy of a Hasid to a surfer. Now, in mourning on a day that was supposed to offer respite from it, I’ll say a shehakol remembering the one I made on chocolate milk 12 years ago, in honor of those who made their final shehakol on the mountain last night. And let those of us who once found ourselves on Mount Meron hold onto the blessings of the place.