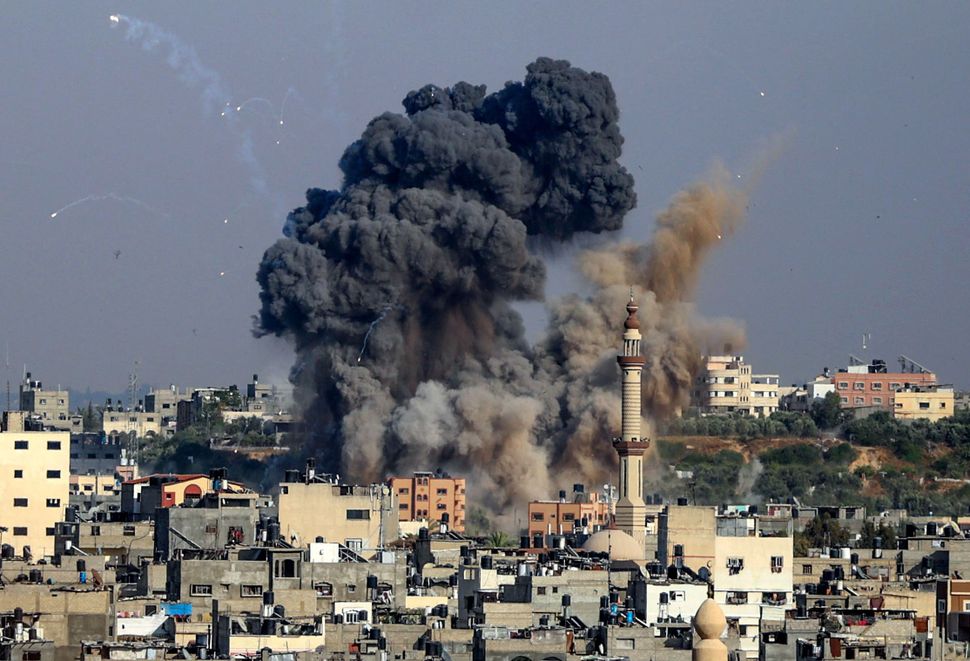 Smoke billows from Israeli air strikes in Gaza City, controlled by the Palestinian Hamas movement, on May 11, 2021. Photo by ANAS BABA/AFP via Getty Images

Miller and thousands of other American Jewish young adults now in Israel on gap years — breaks between high school and college for experiential learning — have long read and talked about the Israeli-Palestinian conflict. Suddenly, this past week, they found themselves running into bomb shelters, plunged into a new and particularly violent phase of the hostilities. Many of them feel torn, questioning Israel’s role in the escalation of the violence, and wondering whether, as Americans, they have a right or responsibility to voice their opinions.

“It’s such a weird contrast going straight from a protest to living this weird Israeli reality of fearing for safety over some conflict that you have no control over,” said Miller, who is from Phoenix.

Rebecca Weiss, 18, a student at the Shalom Hartman Institute in Jerusalem, said that this past week has “totally transformed” her conception of Israeli daily life. In conversations with her Israeli roommates, she felt forced to ask, “What are Americans’ place to voice their opinion right now? Because it’s not our lives. Of course Americans know some people in the IDF, but it’s not like our entire high school class are combat soldiers right now.”

Even as Weiss distinguished between herself and her Israeli classmates amid the crisis, for many American parents of students on gap years in Israel, the line between their own children and Israeli children started to blur.

“Having my own child there during these attacks,” said Ellie Cohanim, who monitored antisemitism in the State Department under former President Trump, and whose son is now in Israel, “definitely makes me feel that same vulnerability that Israelis feel I think on a daily basis.”

But despite the escalating violence on the ground, none of the students, parents, or trip organizers who spoke with the Forward are considering leaving Israel before their planned departure dates later in May.

Ofer Gutman, the chief executive at MASA Israel, told the Forward the gap year program is taking all necessary safety precautions for its students, in some cases moving cohorts from one city to another and providing mental health support for those teens for whom the situation has been particularly frightening.

Watching the news unfold from thousands of miles away, many parents are still losing sleep.

“I go for walks and try to be calm,” said Marina Feldman, whose son is on a high school semester in Israel and daughter is on a gap year program. “You know, if you don’t get a text from your kid, you start worrying.” Feldman knows her children are safe, spending some hours of the night in bomb shelters, and “generally in good spirits.” Her son, she said, even managed to take a College Board AP exam between sirens.

Ilana Preuss, the mother of a student on a Young Judaea program, said she understood her son’s gap year experience was always going to be unusual given the pandemic, with large portions of it spent in lockdown. But the escalation of violence by both Israel and Hamas has taken many by surprise. Now, like everyone else, Preuss said, her son is watching the news — and learning about the origins of the crisis.

“I think he understands that the incitement of all of this is based on what Israeli settlers had done in East Jerusalem,” she said, referring to attacks on Palestinians and planned evictions of Palestinian families in the neighborhood of Sheikh Jarrah. “This is really, and now even more so, about the attacks on Palestinian-Israelis within the towns that they live in.”

The pandemic has actually sharply increased enrollment in Israel gap year programs, which seemed especially enticing this past year given that most college students in the U.S. were offered a mostly on-line experience.

What gap year students in Israel are getting is far more visceral.

For Jacob Miller, a 19-year-old student at a yeshiva in Jerusalem (with no relation to Jake Miller), watching the U.S. news from Israel has been “surreal” and created a feeling of “complete dissonance.”

“This escalation is very much not the dominating story of the day… it’s about Liz Cheney, Biden, which just seems so foreign and unimportant,” he said. “Why am I reading about interparty fighting, intra-party fighting when actual rockets are being fired into Israel at the moment?”

With the death toll in Gaza and Israel growing each day, many American students say they find it difficult to think about anything else.

For Leifman, who is set to start college at the University of Wisconsin-Madison in the fall, the crisis has complicated his relationships with the Israelis he grew close to over the past year, many of whom are about to begin their service in the Israeli Defense Forces.

“I mean, they’re my friends,” he said, “but they’re posting stuff that’s…propaganda. I don’t know what else to call it. It’s from the IDF.”

Amid relative personal safety in Tel Aviv, where bomb shelters are easily accessible and missiles are shot down by the Iron Dome, Jake Miller, the Phoenix native, said, “The things that worry me most now are the random acts of violence and lynchings.” Some of those worries are what brought him to that Tuesday night protest in the first place, outside of Likud headquarters, the homebase of Prime Minister Benjamin Netanyahu’s party.

“There was no fear of violence. It was a majority Jewish gathering, and we’re in Tel Aviv and the police won’t mess with us,” Miller said of the protest. “But I’m sure if it was elsewhere and maybe a different demographic, I would have been more afraid.”

On Monday, as Israelis celebrated Jerusalem Day and conflict over forced evictions of Palestinian families in East Jerusalem came to a head, Weiss, the Shalom Hartman Institute student, and her half-American, half-Israeli cohort had planned to join a march for peace. But when they heard the sirens, they abandoned their balloons and “Tolerant Jerusalem” stickers and ran for shelter.

For the past few days, Weiss has felt consumed by her social media feed, where acquaintances all over the world, including future college classmates she has yet to meet, are posting their perspectives on the conflict, some of which she has found “quite shocking.”

Jacob Miller, the yeshiva student, feels living “in the heart of the rocketfire” has given him a different perspective on the conflict. “It’s a context that’s often missed when you’re discussing it in America and it’s very distant,” he said, thinking ahead to his time on campus at Harvard in the fall.

“I think there’s a tendency on both sides to resist listening to the other side and that’s something I want to combat,” Miller said.