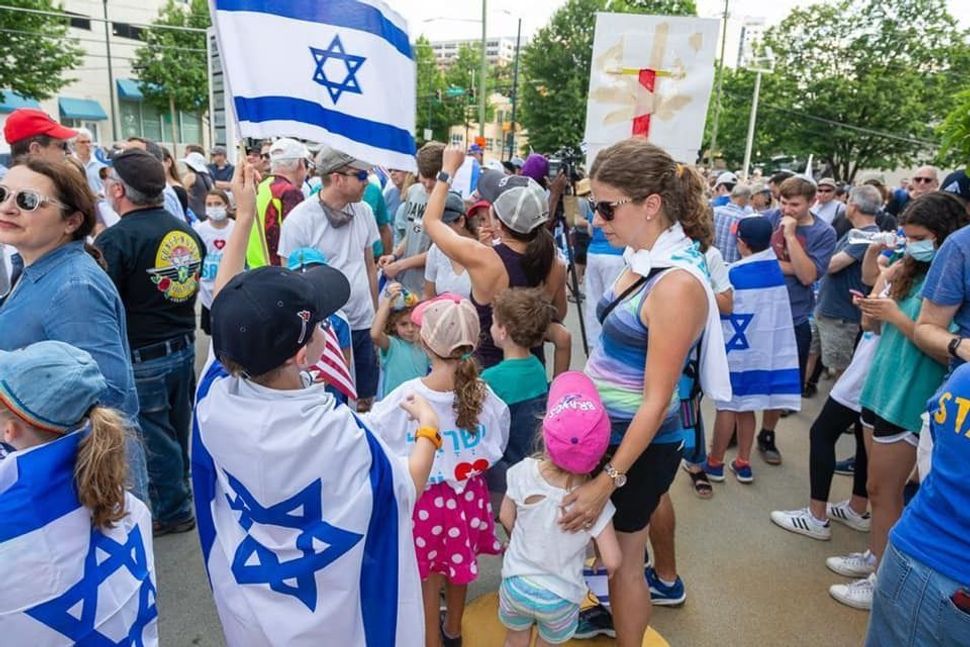 Jews attend a pro-Israel rally in Atlanta on May 23, 2021. Courtesy of Anat Sultan-Dadon

As a group of Orthodox Jews walked home following Shabbat services last week in suburban Atlanta, two days after a ceasefire ended 11 days of conflict between Israel and Hamas, a man walking in another direction made the Nazi salute and yelled, “Hamas should have killed you all.”

That same day, Rabbi Chaim Neiditch was walking home from synagogue with his wife and four young children when a motorist slowed down and yelled at them, “Free Palestine!”

“I didn’t see him and I didn’t think anything of it, but my wife is vice president of the synagogue and she informed the security team there,” he said.

Leslie Silverman, who also lives in the community, said her family has not been targeted but that she has told her 10 and 12-year-old daughters that from now on when they go out they must “walk with a friend — they cannot walk by themselves. I said they must be aware of their surroundings. If someone drives by, rolls down the window and says something, they should turn and run to the nearest house and tell a grownup right away. Most of my friends are having the same conversation with their children.”

The number of antisemitic incidents in the United States has spiked since Hamas fired a barrage of long-range rockets at Jerusalem earlier this month, prompting Israel to respond with targeted attacks on the Gaza Strip. The Secure Community Network, which advises Jewish communities on security matters, recorded an 80 percent jump in incidents this month stemming from the Mideast conflict.

Gavin Ellman, who heads the security committee at Congregation Beth Jacob in Atlanta, observed that when these incidents first started in this heavily Jewish community of Toco Hills, “people were surprised because it is not something we normally see. If you see a fire or someone being attacked, you call 911. But when you get yelled out, people’s first instinct is not to call 911.”

‘You are not going to fool your children’

The importance of parents speaking with their children about what is happening cannot be understated, according to Norman Blumenthal, a psychologist and the Zachter Family Chair in Trauma and Crisis Counseling at Ohel Children’s Home and Family Services in New York.

“The first thing you have to do as a parent is to have a position yourself so you are clear where you stand,” he said. “It’s like when you are on an airplane and they tell you to put the oxygen mask on yourself before you do your child. So talk it over with your spouse first.… The kids are watching you, not just listening to your words. They are listening to the quiver in your voice. If you tell them there is no danger and you are shaking, they will think there is danger; you are not going to fool your children. They read us like books.”

The challenge today is that although there is an increase in antisemitic assaults — both physical and verbal — most Jews are safe.

“You have to have a nuanced message,” Blumenthal said. “You can’t say this is another Kristallnacht. On the other hand it is not as safe as it was a few weeks ago. We have to take precautions we haven’t in the past. On the other hand we don’t have to crawl into our basement with a gun.”

Blumenthal, who on June 1 will speak at a free Zoom webinar at 8:30 p.m. about helping children cope in increasingly scary times (register at: Ohel Webinar), said parents should have different messages based on their child’s temperament. A child who has a tendency towards anxiety would be asked to calm down first before telling him what is going on. And a child who is a daredevil and who says he will fight back must be scared more. In addition, parents should have different messages depending on the age of the child. 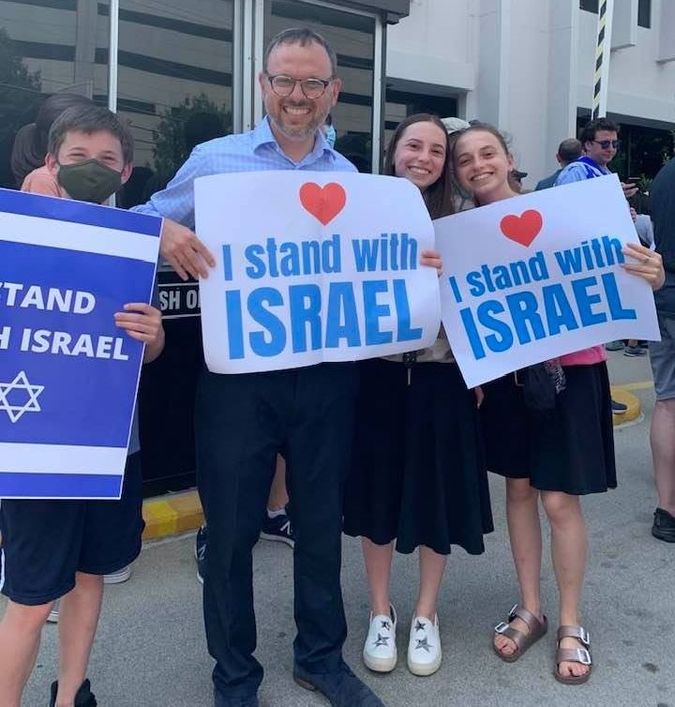 Rabbi Adam Starr, center, at a pro-Israel rally in Atlanta.

Blumenthal said he found that the “venom against Israel and Jews is way disproportionate” on social media, which is “scary to young people who are reading it. It needs to be processed with their parents. Even if they are not physically threatened, they are threatened by the messages on the site.”

Rabbi Neiditch, who is executive director of the Orthodox Union’s Jewish Student Union for Atlanta, said he works with about 4,000 teens in 128 public and private schools. He also said he is aware of the online antisemitic statements.

Most memorable involved the Instagram feed of a Jewish teen who died last year and whose feed was hit with “thousands of antisemitic posts. It was horrific. I can’t imagine how sick these people are. They posted terrible messages.”

Neiditch said that although he is only seeing antisemitic words, he is concerned it will lead to people who will feel justified in attacking Jewish people. I tell [the teens], ‘If you see something, say something. If something happens in school, report it.’ The schools I work with do a great job of dealing with it and have zero tolerance with this type of behavior.”

Several Atlanta rabbis told the Forward that although they have increased security precautions, nothing has changed about their way of life.

“I spoke about it from the pulpit at a rally we had for Israel last Sunday,” said Rabbi Adam Starr of Congregation Ohr HaTorah. “I told the men to continue to wear their kippah publicly and told the women that if they have a Jewish star, they should wear it with pride.”