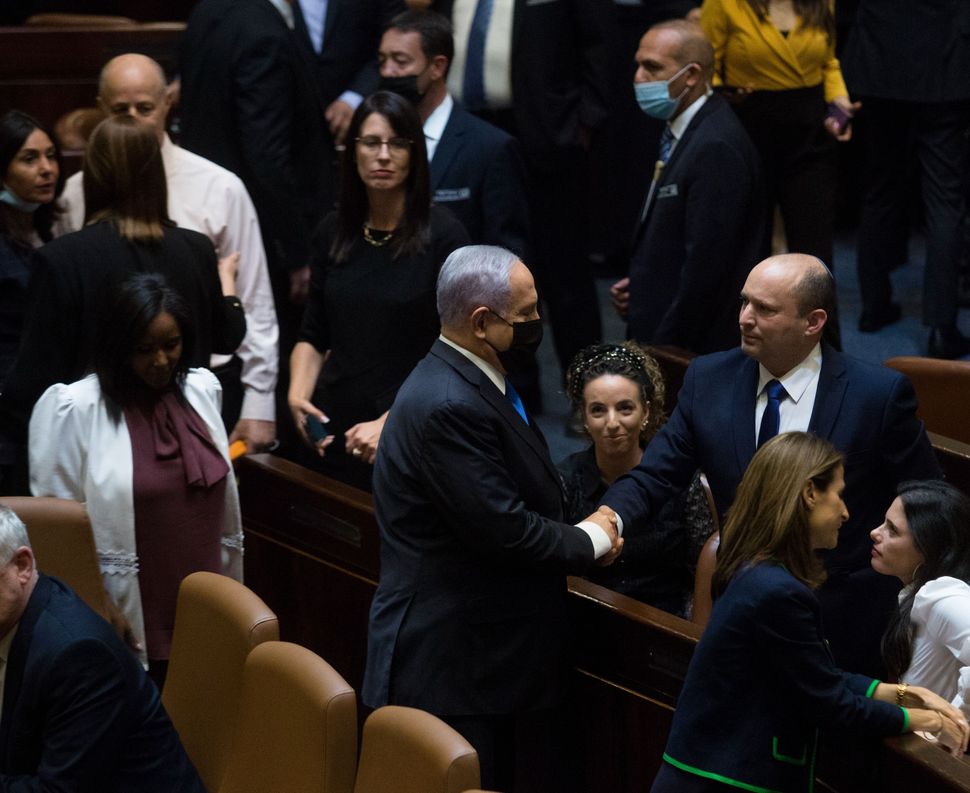 22 years ago, George Birnbaum was at Benjamin Netanyahu’s side as his campaign strategist when the former prime minister lost his first re-election bid. On Sunday, Birnbaum, who was once Netanyahu’s chief of staff, was in the Knesset, watching Netanyahu exit the stage once again. But this time, Birnbaum was signed on to assist the opposing team, to help Naftali Bennett to bring an end to Netanyahu’s 12-year rule.

If the political consultant felt any qualms about a current client replacing a former one, he didn’t show it.

“My primary focus for any leader in Israel is that they protect Jewish blood from being spilled,” said Birnbaum. “That comes first and foremost. Then everything else matters … I’m very hopeful for the sake of the Jewish people that this government succeeds in good ways.”

But in a phone interview on Sunday, the day Netanyahu’s rule was officially quashed, Birnbaum suggested that we might hear from the former prime minister again. “He is sharp, he is energetic, he is passionate,” he said. “Of course he can make a comeback.”

Birnbaum, 51, predicted that it’s going to be a “real challenge” for Israel’s new unity government to deal with an opposition leader who has dominated the Israeli political and diplomatic scene for more than 30 years. “Bibi understands politics better than anyone,” he said, referring to Netanyahu by his nickname. “I think he’s going to be a very strong opposition.”

Netanyahu is in a unique position to mount a serious challenge from the right, he added. “As prime minister he has done a lot for this country. He is enormously dedicated to the State of Israel and the Jewish people,” Birnbaum said. “And as long as he has a voice, he’s going to do what he thinks is good for the Jewish people for Israel.”

Birnbaum, who served as Bennett’s chief strategist in the past election cycle, said the fate of the new government all depends on how Bennett performs as Israel’s 13th prime minister and the conflicts he has to face. “He is a very astute politician and he’s a fantastic businessman,” he said. “As a businessman, he had to work to bring people with various ideas together for a common goal. And I think those traits of his will certainly serve him well in managing this coalition.” 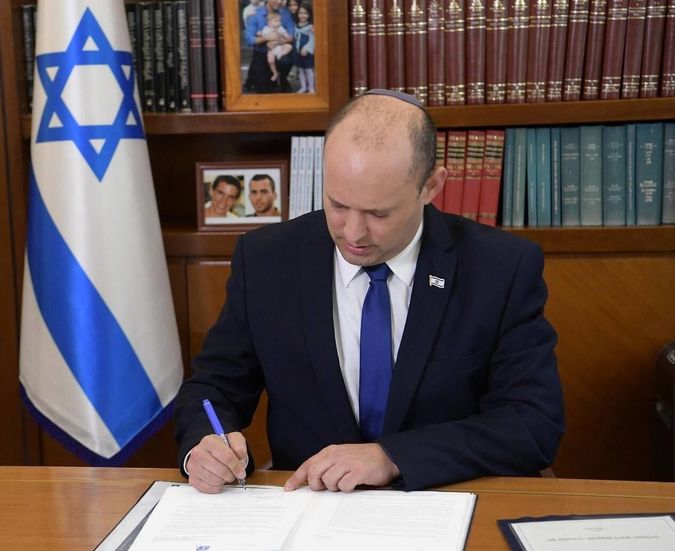 Israeli Prime Minister Naftali Bennett on his first day in office at the prime minister’s office in Jerusalem. Image by Amos Ben Gershom/GPO

And though Bennett broke a key election promise to form this coalition government with centrist Yair Lapid and the left, voters in the end may not care what ties he had to forge to win. “When it comes time for him to stand for reelection, people will have to look at what he has accomplished,” he said. “If he succeeds and does good for the country, his pre-election promises won’t matter. No one will remember that if he’s a success as prime minister.”

Birnbaum said that from the moment Bennett launched his campaign for prime minister the strategy was never to box himself into one camp or another. “I always told Naftali, you run in elections to win,” he said. But from the moment Netanyahu failed to put together a right-wing government, he said, Bennett found himself more than a kingmaker in that he was able to force the anti-Netanyahu bloc to offer him the first place in a rotation government. “He negotiated masterfully and deserves all the credit for that,” Birnbaum said.

What you see from there

Birnbaum, who has advised several Israeli leaders, including former Prime Minister Ariel Sharon, predicts that Bennett, a former settler leader who has favored annexing Israeli settlements in the occupied West Bank, will moderate his views in his new position. “The prime minister of Israel has to make decisions of life and death on a daily basis,” he said. “That’s a lot of responsibility, and that changes a person.”

He echoed a line once uttered by Sharon to explain his willingness at times to abandon his own ideology once he assumed office: “What you see from here, you don’t see from there.”

Birnbaum elaborated: “I have seen what the weight of leadership does to a person that becomes the leader of a country. … Leadership requires some very tough decisions and it means evolving a little bit in terms of your thought process and your rhetoric.” 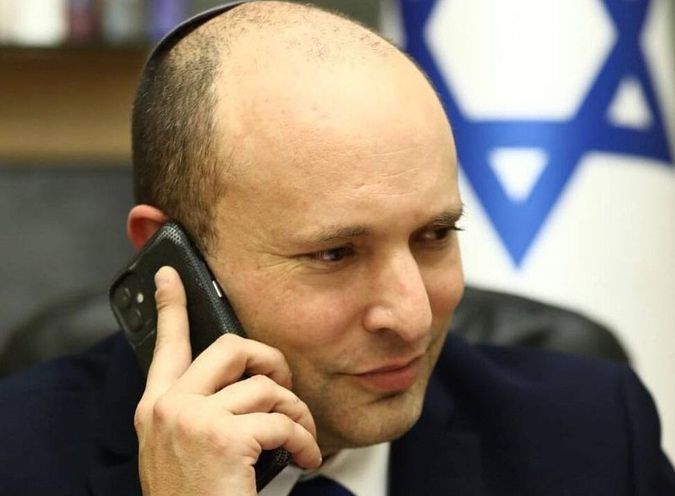 Bennett’s relationship with Washington began just hours after he was sworn in with a phone call from President Joe Biden, who was in the U.K. to attend the G-7 summit. By comparison, Biden waited four weeks after his inauguration before he called Netanyahu. The White House said that in their conversation, Biden made it clear that he expects to see movement on the Israeli-Palestinian peace process, an issue that was not mentioned in the readout of the call provided by the prime minister’s office.

Birnbaum said he would advise the Biden administration to consider the unique makeup of the government – a diverse coalition that includes conservative and left-wing parties, and, for the first time in Israeli history, Arab parties – before applying pressure that could break it apart. “I would find a lot of common ground if I were the Biden administration,” he said.

Birnbaum was born in Los Angeles and grew up in Atlanta, where he got an early taste of politics as student council president at the city’s Yeshiva High School. He first came to work for Netanyahu in 1996 as an associate of the late Arthur Finkelstein, a Republican consultant and the brain behind Netanyahu’s victory. Birnbaum later became Netanyahu’s chief of staff. 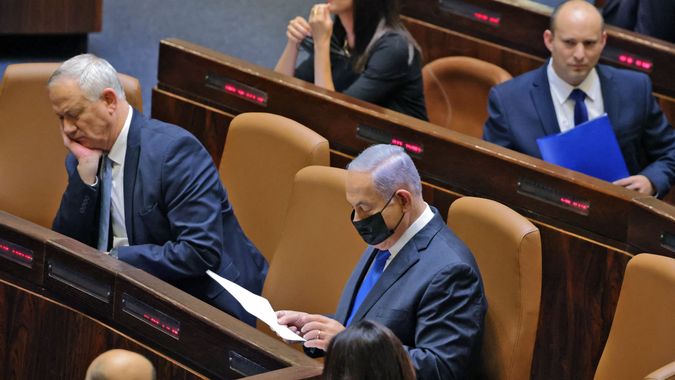 rime Minister Benjamin Netanyahu (C), and head of Yamina party Naftali Bennett (R) attend a special session to vote on a new government at the Knesset in Jerusalem, on June 13, 2021. Image by EMMANUEL DUNAND / AFP) (Photo by EMMANUEL DUNAND/AFP via Getty Images

“I have a career because of Arthur Finkelstein,” he said. “We worked in countries over the world, but Israel was really special for us because we are Jews, because we are the sons and grandsons of Holocaust survivors.”

The two later became partners until Finklestein’s death in 2017, and Birnbaum has since helped elect a number of world leaders, including Hungarian Prime Minister Viktor Orbán. “I miss Arthur every day,” he said. “Because to the very day that he died he was not just my partner, he was my mentor.” He wondered what Finkelstein would have said on a day like yesterday, which marked the end of an era for Netanyahu’s reign. “I would love to have a conversation with him about it,” he said.