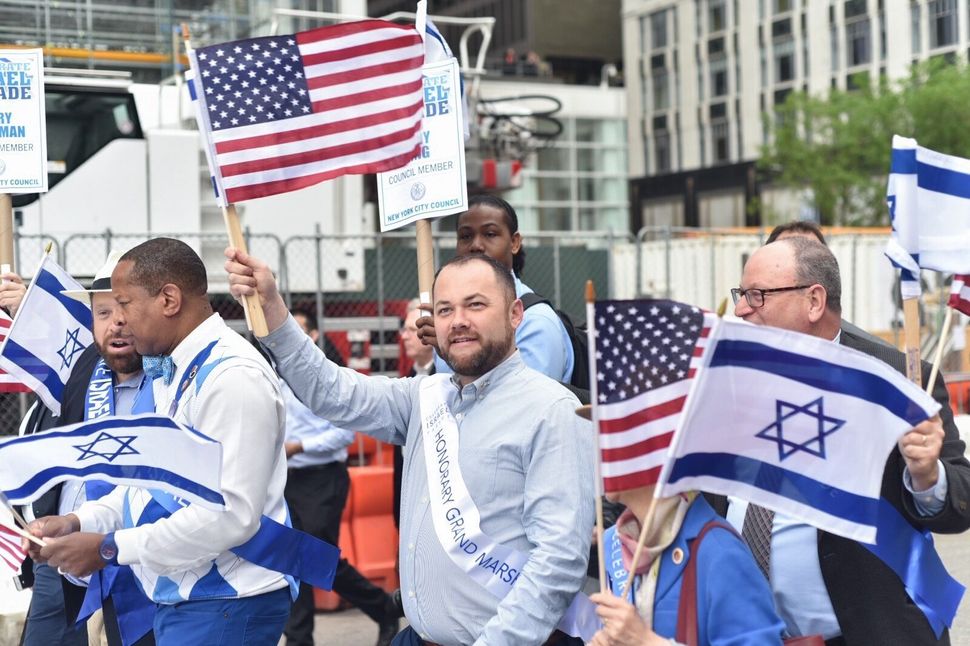 Most New York City Council candidates who responded to a Forward survey said that they would travel to Israel and the occupied West Bank if elected; oppose the Boycott, Divestment and Sanctions movement; and believe that public schools do not properly educate students about the Holocaust.

These were among the takeaways from 66 candidates across 35 districts who filled out the 16-question survey conducted in partnership with New York Jewish Agenda, a liberal Jewish advocacy group launched last year. Overall, 340 candidates are competing in the June 22 primaries for the council’s 51 seats, and with 35 incumbents leaving office, most because of term limits, these elections could lead to significant shifts in the council’s overall makeup and ideology.

The 66 candidates who filled out the survey come from districts with sizable Jewish populations across the five boroughs, including in the heavily Jewish districts in Brooklyn and Queens.

Fifty-six candidates, or 83% of those who answered this question, said that if invited, they would visit Israel while in office to learn first-hand from both Israelis and Palestinians about the conflict in the region. The list includes two unabashed progressive candidates — Edwin Raymond (District 40) and Moumita Ahmed (District 24), who previously came under fire for tweets calling sponsored trips to Israel ‘propaganda.’ An additional five said that they would agree to travel to Israel with certain conditions, such as being dependent on the state of the conflict at the moment or not funded by a special interest group.

If invited, would you visit Israel while in office to learn first-hand from both Israelis and Palestinians about the conflict there?

The Democratic Socialists of America required 2021 candidates who sought their endorsement last year to pledge not to travel to Israel on an educational trip if elected. The DSA later clarified that its pledge referred specifically to annual trips sponsored by the Jewish Community Relations Council. Six candidates signed the pledge and earned their endorsement, including four who are running in districts with sizable Jewish populations. The DSA-backed candidates did not respond to the ForwardBeaks842,wing survey.

The JCRC has for more than two decades been taking New York City Council members and other local politicians on yearly educational missions in which they meet with top officials, Jewish and Arab community leaders and journalists, and tour historical and strategic sites. At least 30 of the current 51-member council have joined one or more of those trips.

Of the 66 survey respondents, 20 said they have already visited Israel. Several Jewish ones had gone on teen tours or with their families, one had her twins bar mitzvah’d there, one visited family members who had settled there after fleeing the Soviet Union, and one went on an interfaith mission. (You can see full results of the survey, and look at individual candidate’s responses to each question, by clicking here.)

This year’s municipal elections have a record number of open seats — 35 — in which no incumbent is running, ensuring a turnover of more than two-thirds of the council. That means the chamber will have a lot of new faces, along with a new mayor.

About two-thirds of New York’s voters are registered Democrats, making the party’s primary all-but determinative of the November election.

Experts estimate that New York’s 1.1 million Jews make up about 20% of the voters in the city’s Democratic primaries.

“The majority of Jews in New York City support liberal policies and priorities and those running for City Council must understand this,” said Matt Nosanchuk, president of the New York Jewish Agenda. “By a wide margin, the candidates who responded hold views that align with the city’s mainstream Jewish voices. We were particularly heartened to see the willingness of candidates to travel to Israel to learn first-hand about the conflict from Israelis and Palestinians.”

The Jewish vote could prove particularly influential in the new ranked-choice voting system, which asks voters to delineate up to five choices on their ballots, because it would allow them to single out several candidates in crowded races. If no single candidate wins 50% of the first-choice votes, the candidate with the fewest first-choice votes is eliminated and those ballots reallocated to their voters’ second choices. That process continues, with third-, fourth- and fifth-choices used when second-choice candidates have already been eliminated, until one candidate wins more than 50%.

The survey found that 79% of respondents oppose the BDS movement, which aims to use economic pressure to force Israel to change its policies toward the Palestinians. Six candidates said they support BDS, and another five offered reservations about the boycott movement as formal policy but said that they agree with it in principle.

What is your position on the Boycott, Divest, Sanctions (BDS) movement?

The current City Council passed a resolution in 2016 condemning “all efforts to delegitimize the State of Israel and the global movement to boycott, divest from, and sanction the people of Israel.”

Earlier that year, Gov. Andrew Cuomo signed an executive order barring BDS supporters from doing business with the state government. Civil liberties groups and progressives, including some BDS opponents, find that and similar moves a bridge too far that infringes on free speech.

The candidates were also asked to rate their alignment with five Jewish groups that engage on the Israeli-Palestinian conflict, with a 5 indicating “I support them fully” and 1 being “I disagree with them vehemently.”

Seventeen candidates picked AIPAC, leading pro-Israel lobby, as the group they fully support; 12 picked J Street, a national pro-peace advocacy group; eight aligned themselves with IfNotNow, a progressive activist group opposing the Israeli occupation; eight with Jewish Voices for Peace, a left-wing activist group that supports BDS; and eight with the Zionist Organization of America, a right-wing group opposed to the creation of a Palestinian state. Five candidates said they vehemently disagree with AIPAC.

Jessica Haller, a former council candidate and a member of NYJA’s leadership team, noted that as the city with the largest Jewish population outside of Israel, it’s important for voters to know where their representatives stand on the Palestinian conflict. Pointing to former Mayor Ed Koch’s prioritization of Israel as a local issue, Haller said that “if we continue to hold that to be true, then an openness to travel to Israel and experience the reality on the ground is the only way we will contribute to solving the conflict.”

Amid a surge in identity-based hate crimes against, especially anti-Asian and, antisemitic violence, an overwhelming majority of respondents, 93%, said they believe the city’s public school curriculum inadequately educates students about the Holocaust, antisemitism, and other forms of identity-based hate.

However, while a majority of the candidates surveyed support efforts to increase criminal penalties for hate crimes, 15 said they would oppose any additional punishment.

“The candidates recognize the acute concern in our community over rising antisemitism and agree with us that education is absolutely vital in addressing it,” said Nosanchuk, the New York Jewish agenda head and President Obama’s former liaison to the Jewish community. “Diversity is among New York City’s greatest strengths, and nothing is more important than teaching our kids that hate and bigotry of any kind have no place here.”

How would you rate the performance of NYC hate-crime czar, Deborah Lauter?

In 2019, Mayor Bill de Blasio created the New York City Office for the Prevention of Hate Crimes in the aftermath of a rash of violent attacks on visibly Orthodox Jews across the city. Most candidates rated the head of that office, Deborah Lauter, also called the hate-crime czar, as having performed well, with 25 giving her a mark of 9 to 6; 15 giving her a 5, and 17 candidates her a mark of 4 or below.

Candidates were split about what approach the government should take to ensure that non-public schools, including Haredi yeshivas, are providing adequate education in secular subjects including English, math and science. State guidelines require education at private schools to be “substantially equivalent” to instruction at public schools.

Do you believe the state should inspect non-public schools, including Haredi yeshivas, to ensure that students are receiving adequate education in secular subjects including English, math and science?

Thirty-two of the 66 candidates surveyed said the state should inspect private schools for compliance with state standards, while 11, or 16% of the respondents, expressed opposition; others offered specific solutions to balance enforcement and religious freedom.

The question of how much secular education should be required in private yeshivas has been roiling the Orthodox communities in recent years. A city Department of Education report in 2019 found that 26 of the 28 yeshivas investigated were not providing the amount of secular education that is “substantially equivalent” to that of public schools, as required by state law.

Yaffed, a pro-secular education group founded by former yeshiva students and parents, has been lobbying the government and candidates to enforce the state guidelines on all schools to ensure all students are provided with a high-quality education.

Most council candidates said in our survey that the city should intervene in some way if non-public schools are found not to be providing adequate education in secular subjects.

Here are some other highlights of the survey:

What issues do you think New York Jews care about most?