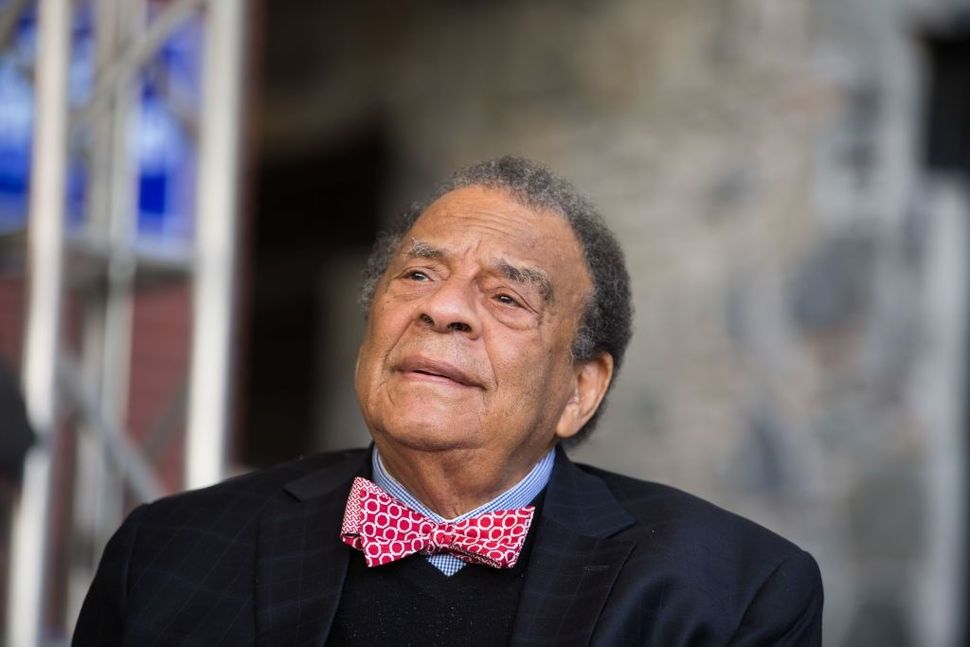 Ambassador Andrew Young at an event in Atlanta. Photo by Jessica McGowan/Getty Images 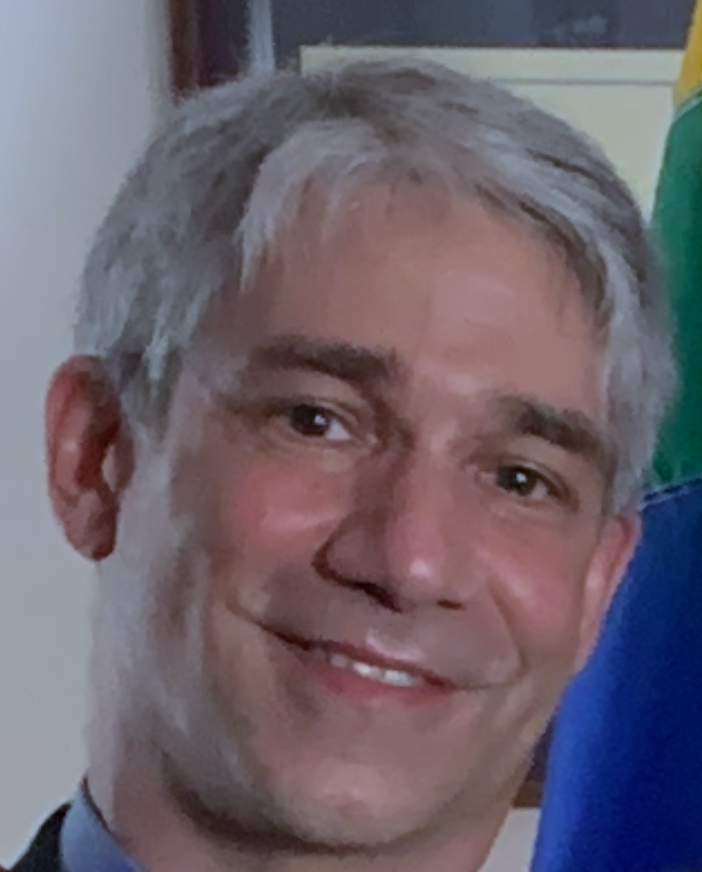 “I guess I’m a Jew,” Andrew Young says with surprise, like it’s occurring to him for the first time, which it probably is, although it definitely shouldn’t be.

It is June 7th, 2021 and we are facing each other in a basement studio of the Georgia Public Broadcasting building in Atlanta, which also houses the Andrew Young Foundation a few floors above us.

There are two cameras over my left shoulder and bright spotlights are all around us as I interview him for “The Rabbi & The Reverend”, the documentary I am executive producing about my 92-year-old father, Rabbi Israel Dresner, the most arrested and jailed rabbi during the civil rights movement. My dad was Young’s brother-in-arms and friend. Although he is indeed an ordained Congregationalist Minister, Young is not the reverend of the film’s title. That honorific belongs to his and my father’s mutual friend, Martin Luther King, Jr.

I have not seen Andy for six years, when he was last at my father’s synagogue in New Jersey as the featured speaker in the annual Tikkun Olam lecture series. The time before that was at the White House in 2013 for the fiftieth anniversary celebration of the March on Washington.

At 89, Young has aged considerably since then. His knees, which by his own admission, have needed replacement for roughly a quarter century — a surgery he refuses to undergo — have mostly relegated him to a motorized scooter. However, to paraphrase the words of Deuteronomy, used to describe Moses near the end of his life looking out over the Promised Land, “his eyes are not weak and his vitality is not diminished.” 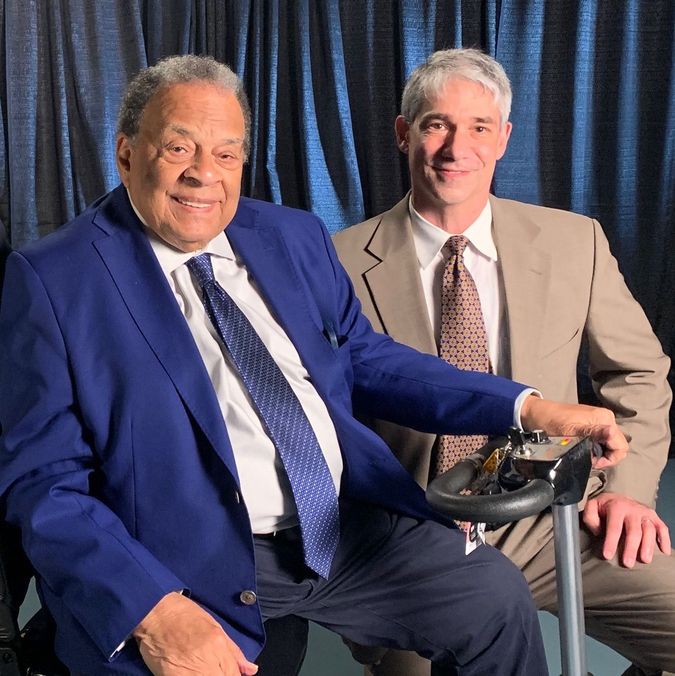 The image is apt because it was standing on a mountain — the serendipitously named Kings Mountain in North Carolina — where a 19-year-old Young, having just graduated from Howard University, first realized his calling. He beautifully describes this epiphany in his autobiography, “An Easy Burden,” which is required reading for anyone who wants to understand, as the book’s subtitle puts it, “The Civil Rights Movement and the Transformation of America.”

Surveying the valley in full harmonious bloom, Young writes that he realized that, “If everything else in the world was a part of God’s order, then so must I be a part of some plan of the Creator…From the moment of that transcendent experience I thought about a religious purpose for my life that was in tune with my nature, a personal religious purpose that would be at the center of my life.”

That spiritual awakening set in motion a chain of events that would lead Young to seek ordination as a Minister in the Congregational Church — the church he had grown up in in New Orleans — and, ultimately, it placed him at the center of the civil rights movement, which was otherwise dominated by Baptists. For all that, though, Jews and Judaism have been central to Young’s journey throughout his life and even before it.

Young’s great-grandmother, on his mother’s side, was in a plaçage relationship — a type of common law marriage or civil union, since interracial marriages were against the law in much of the United States then — with a Polish Jew. So, he actually is partly of Jewish descent.

Young’s father was a dentist in New Orleans. In fact, one of his patients was Louis Armstrong, the jazz giant, who wore a Star of David necklace his whole life in tribute to the Jewish family who employed him as a youth, took him under their wing and bought him his first cornet.

“He must have been the easiest patient in the world to work on,” I quipped to Young, “because his mouth was always wide open.” He chuckled and, for a moment, I got a glimpse of the handsome gimlet-eyed young man portrayed in the two photo sections that break up the 534 pages of his autobiography.

His father’s dental office was in the Young family home, and most of his father’s friends and business associates were Jewish. On the corner, not 50 feet from his front door, stood the headquarters of the German American bund. In the early 1930s, during Hitler’s rise to power, a young Andy saw Nazi swastika flags flying outside the building and heard the singing of “Deutchland, Deutschland Uber Alles” coming from within.

Obviously, the civil rights movement was full of Jews too numerous to name and, of that, Young says simply: “We in the movement owe a lot to Jews and the Jewish faith for inspiring us and standing with us.”

Even after his movement days, Jews continued to play a prominent role in Young’s development. Sam Massell, the first Jewish mayor of Atlanta, was instrumental in Young’s political rise, when he appointed Young as co-chair of the Community Relations Commission. The position provided Young with the springboard that ultimately made him the first African American to be elected to Congress from Georgia since Reconstruction and, later, the second African American mayor of Atlanta.

Young fondly remembers how Rabbi Jacob Rothschild’s mother-in-law and son canvassed for him. Rothschild was the legendary rabbi of The Temple in Atlanta, which was bombed during the civil rights movement, a scene depicted in the film version of Alfred Uhry’s “Driving Miss Daisy.” Senator John Ossoff grew up in that synagogue and was sworn into the Senate on Rabbi Rothschild’s Bible.

A dark spot in Young’s relationship with the Jews came in between his last term in Congress and his first term as mayor, when he served as President Carter’s ambassador to the United Nations and, yet, even this darkness is illuminating.

Although it is far more complicated than this, Young got into trouble for meeting a representative from the Palestinian Liberation Organization at a time when that ran counter to American foreign policy. This caused a considerable uproar within the State Department and within the American Jewish community. Young knew that the African American community would rally to support him, but he feared what that could mean for its relationship with the Jewish community. Rather than risk that, he chose to submit his resignation, and President Carter reluctantly accepted it.

Young acknowledges that “people like to see me as Carter did, as a stand-in for Dr. King, and that I try hard to reflect Martin’s views.”

Young’s views have benefited from more than half a century of living since King’s death and from his relationship with the Jewish community.